This is only my second Six of 2020! I’ve been absent since the very first Saturday of the new decade so I steeled myself and headed out into Storm Dennis to see what was occurring in the garden. As Winnie the Pooh would say, it is a rather blustery day!

I’m itching to get out there and do some tidying and general maintenance, but I’m a fair weather, well everything really, but especially gardener, so I’m spending most of my free time cowering inside away from the cold, wind and rain!

I am, however, cheered when I look out of the window, by the sight of Spring bulbs starting to push through so I’m going to start my Six with two of these.

Daffodils! This is one of the ones that my Dad bought me for my birthday from wonderful Webbs a couple of years ago. They are beautiful, but I planted them in a row in front of my birthday planter (designed and built by my other Dad) and I now realise that they’d have looked much better in clumps, but hey, a daffodil’s still a daffodil in any order, and it still means the end of Winter is nigh!

Bluebells! We have THOUSANDS of bluebells in our garden, probably literally, and we didn’t plant a single one of them! They’re starting to push up all around the edge of our gravel bistro already. They always seem to take forever to go from this stage to actual flowers, and then all too soon they fade and I’m left with the less attractive foliage.

Here’s something else that I didn’t plant. I found this at the far end of our garden last year, presumably a gift from the birds, and included it in a Six back then. I was reliably informed by Jim of Jim’s Camelias that it’s a Cowslip. I relocated it from the end of the garden to the aforementioned planter where it thrived and flowered beautifully. I assumed it would be an annual but luckily didn’t resign it to the compost bin at the end of the Summer because I noticed today that it’s coming back. 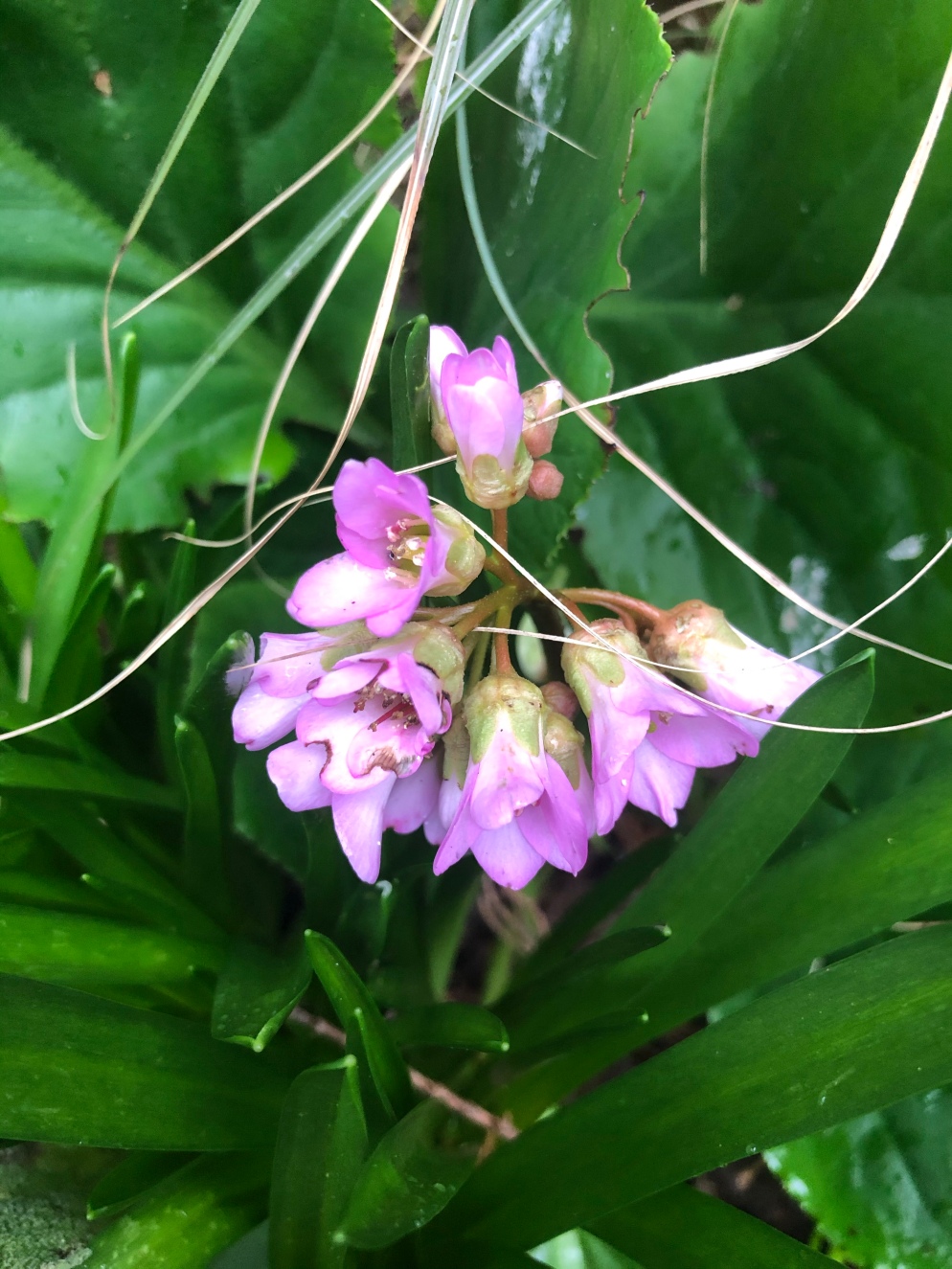 Bergenia! I have regular chats with our cleaner at work, Debbie, about gardening and over the last couple of years she’s been kind enough to bring me several plants from her garden that have self seeded and multiplied too much for her to keep on top of. One of them was this Bergenia which has started flowering again. This didn’t look too happy towards the end of last year so I wasn’t confident that it would survive, but I’m delighted that it has. You can see more bluebells sprouting up underneath it too – told you we have thousands!

Hellebores! These are two separate plants, both from the sale table at Notcutts last year. They’ve come into their own now and are looking beautiful. I have another sale table Hellebore which is white, and lovely as that one is, it isn’t a patch on the pretty purple of these two. I had no idea these would be purple so it was a really lovely surprise. 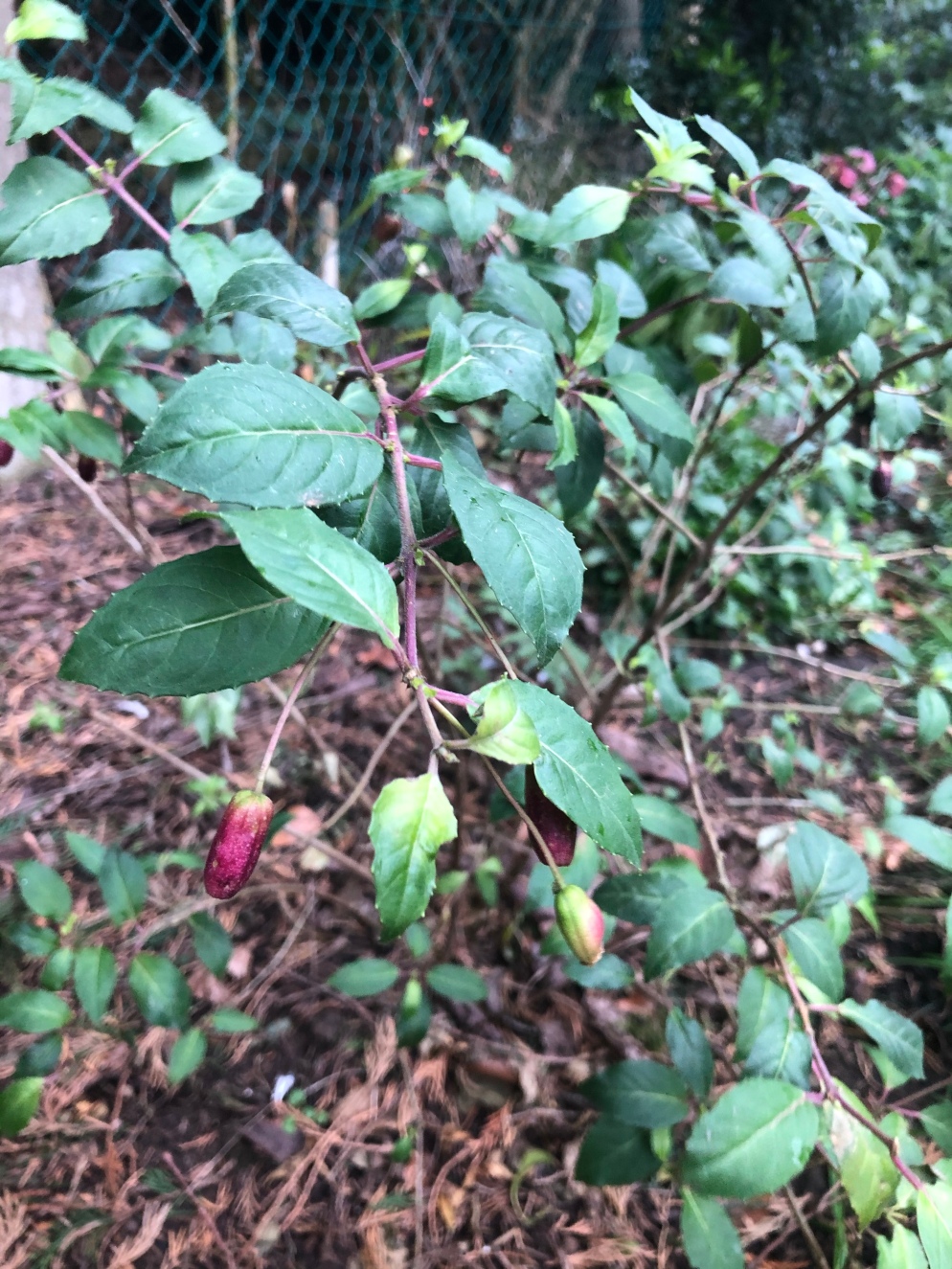 Finally I wanted to share my joy that my Fuschia Delta Sarah has survived the Winter! It was really hard to take a decent photo of this because it’s a little bit bare, but it is most definitely still alive, unlike its predecessor which, despite promises of being hardy down to something silly like minus twenty, succumbed to the cold last year. I got this one from Gardeners’ World in June and I got the biggest one they had in the hopes that it would be better able to withstand the Winter weather. I can’t wait for it to fill out and start producing those beautiful purple flowers in the Summer. It is, after all, named for yours truly!

If you’re interested in reading other Sixes from around the country and the world, do check out the Propagator’s page.