Here I am again! Twice in as many days. This is going to be a very random outpouring of news I fear! Sorry in advance – think of it as eclectic!

I’ve entitled this ‘quick’, but in reality it is anything but because my nails have got so long, it’s really hard to type accurately! I was recommended a new nail technician and I’ve been religiously going to her for beautiful sparkly gel nails every three weeks.

These are what I’ve had so far. 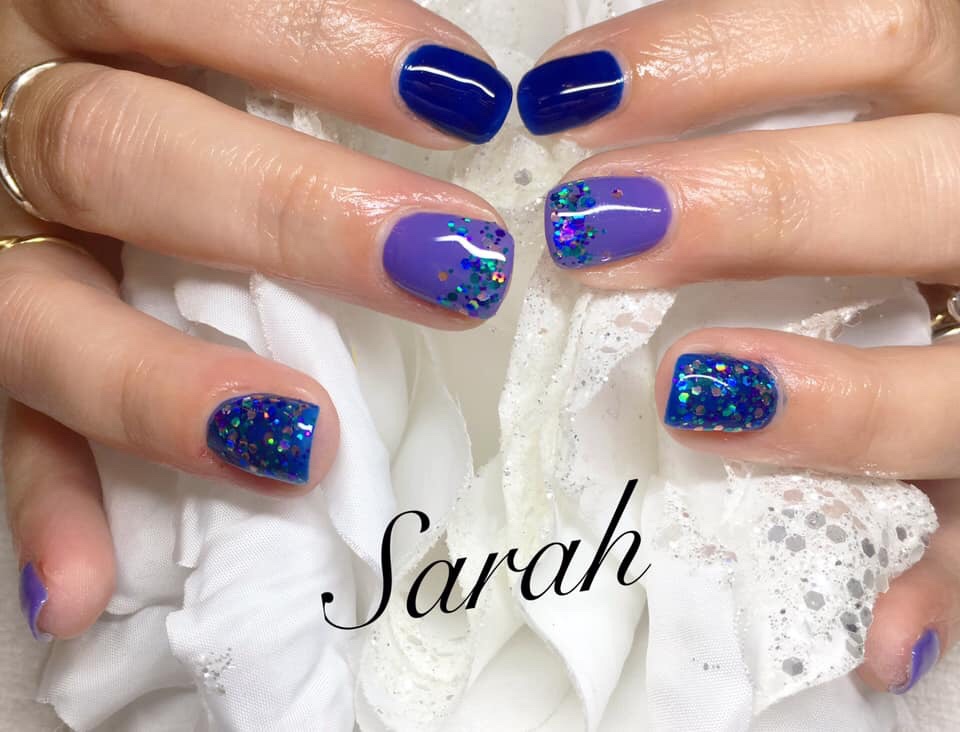 The last set had to be less glitterified because I had a very important work event which required professionalism! I’ll tell you more about that enough another time, but suffice it to say, it worked! It led to another work event which happened to be on the day that I was due to get my nails re-done hence they’re now REALLY long! I’m not due to get them done for almost another two weeks, but I will be going for full on sparkle overload ready for the festive season.

What else have I been up to? I did some baking. I bought some fabulous cookie cutters a few weeks ago and I really wanted to try them out, but didn’t want to completely scupper my diet plan so I scoured t’internet for a diet friendly cookie recipe and found one that didn’t break the diet bank.

It swapped sugar for sweetener and only used a small amount of low fat spread instead of butter. 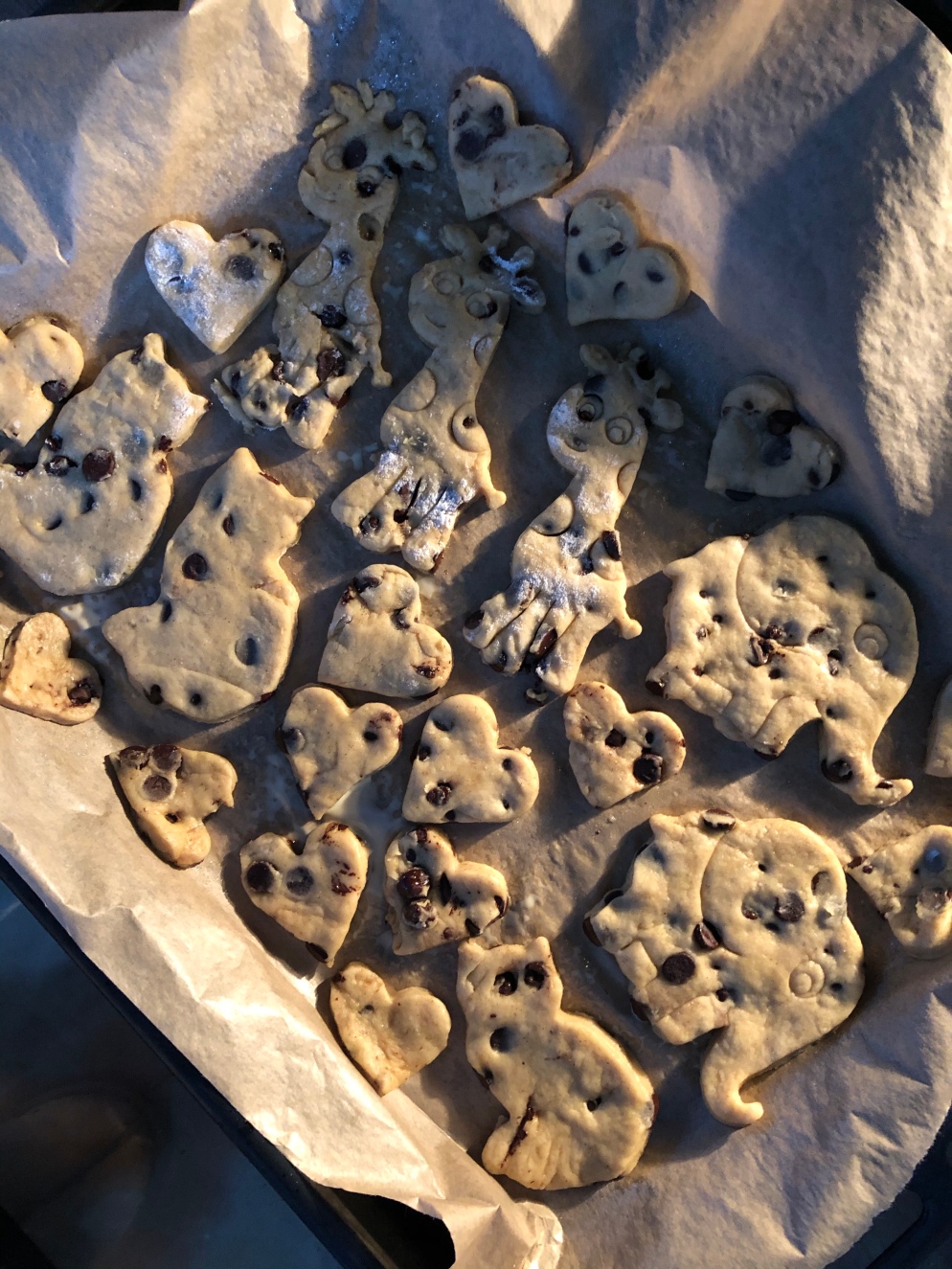 Here they are pre-baking.

They lost some of their shape in the oven but I was still pretty pleased with how they turned out. 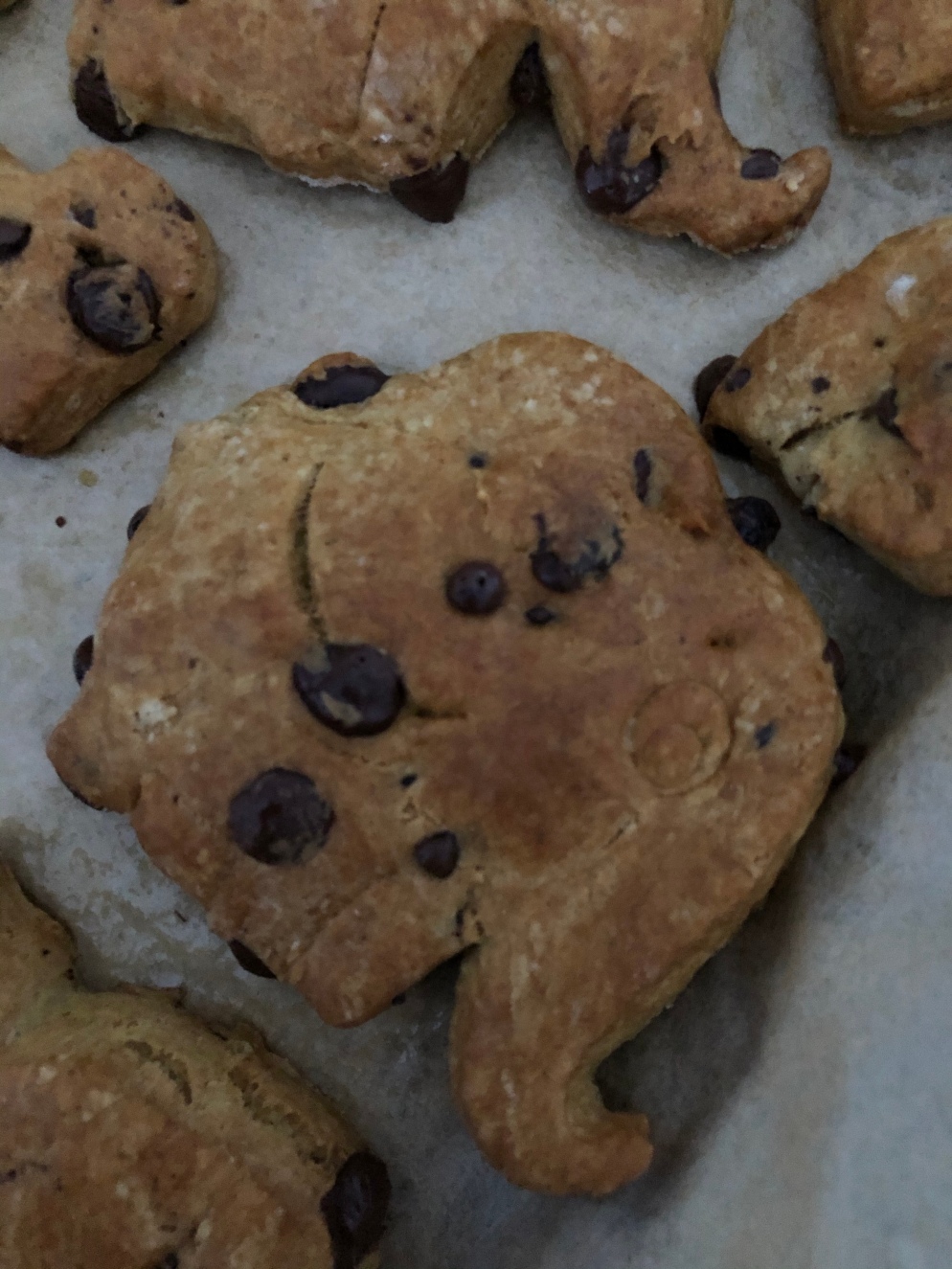 I won’t lie, they weren’t as tasty as Millie’s or Maryland cookies, but I was happy enough to offer them to my Dad (sweet things connoisseur) and C when they came to visit.

That visit was a mercy mission for our little Olive. She recently learnt how to hop up on to the banister at the top of the stairs.

Doesn’t she look pleased with herself?

Cats aren’t always as surefooted as they’re reputed to be and our poor Olive slipped off the banister and fell top to bottom, right down to the hall below. We put the cardboard turrets on the posts, as you can see in the photo, but it didn’t stop her jumping up.

We have a safety shelf to catch floundering felines! Of course, to the best of our knowledge she hasn’t toppled off since it’s been safe to do so, but at least we have peace of mind.

Last weekend was super busy. On Friday I was in London for the annual ISTA (International Steel Trade Association) lunch at the Brewery. I completely forgot to take any photos which is a shame because the food’s always beautifully presented. We enjoyed salmon mi cuit for our first course. I’m glad I didn’t know that mi cuit means half cooked until after I’d eaten it because it would’ve put me off but it was really tasty. The main course was Hunter’s Chicken but it wasn’t Hunter’s Chicken like you get in the pub down the road! It was super posh Hunter’s Chicken and was scrummy. The dessert was pear sponge pudding with ice cream and completed a trio of deliciousness.

The speeches were shorter than usual, which I think was a good thing because the state of the steel industry isn’t good so many more words would just have added to the gloom. The ‘celebrity’ speaker was Dr Phil Hammond, who I’d never heard of, and after hearing him, I think I’ll just forget him again! It was a good day though, I caught up with some old friends, met some new friends and ate some yummy food – what’s not to like?

On Saturday I travelled back down to London. If I’d known further in advance I could’ve stayed overnight on Friday to save all the travelling, but hey, never mind. I’d already arranged with my Dad that he’d drop me at Uxbridge tube station and he’d go to the Harry Potter Studios in Watford whilst I jumped on the tube to South Kensington. Destination? The Royal Albert Hall … 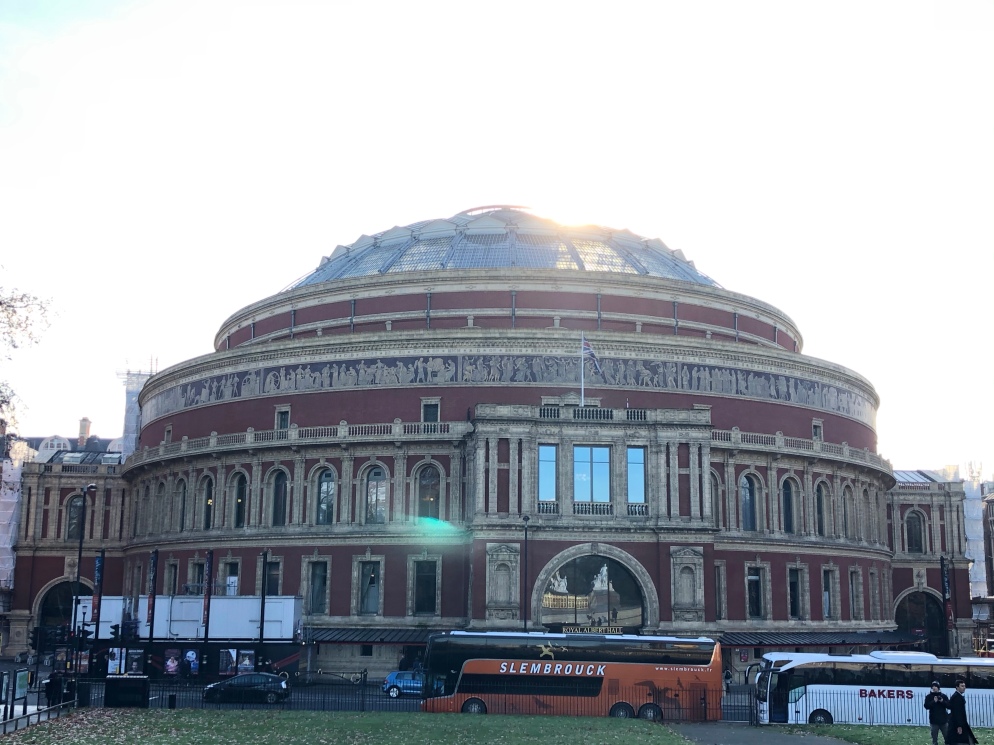 … to watch the Champions Tennis.

I arrived a little early so I had a quick wander around the Prince Albert Memorial statue in Kensington Gardens.

Prince Albert is surrounded on all four corners by representations of Europe, America, Asia and Africa. 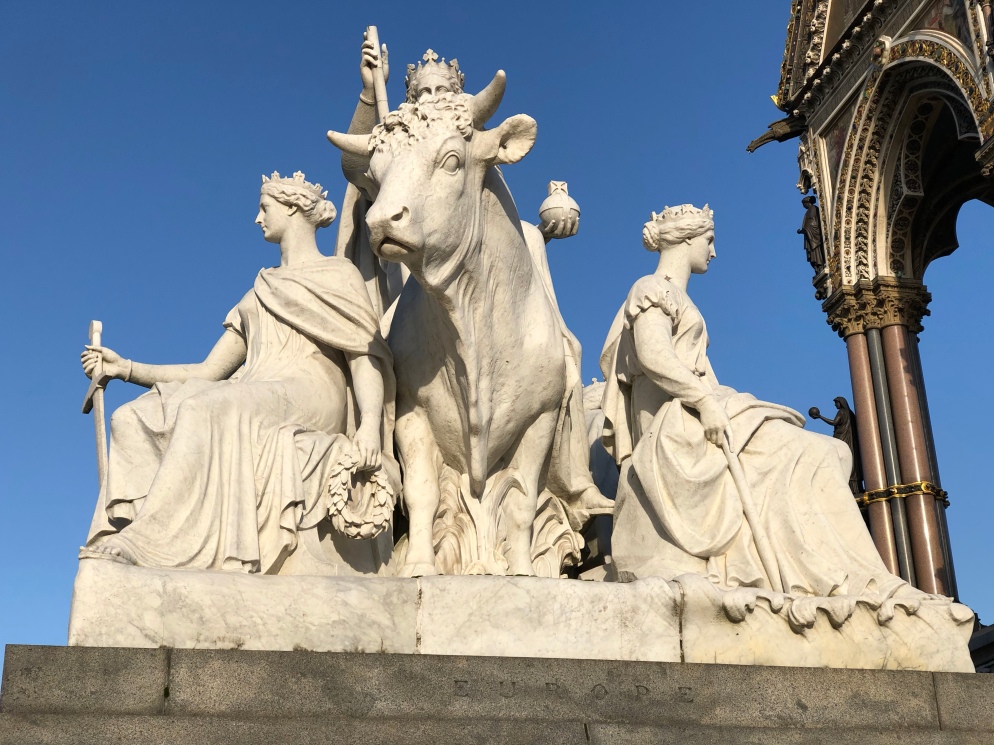 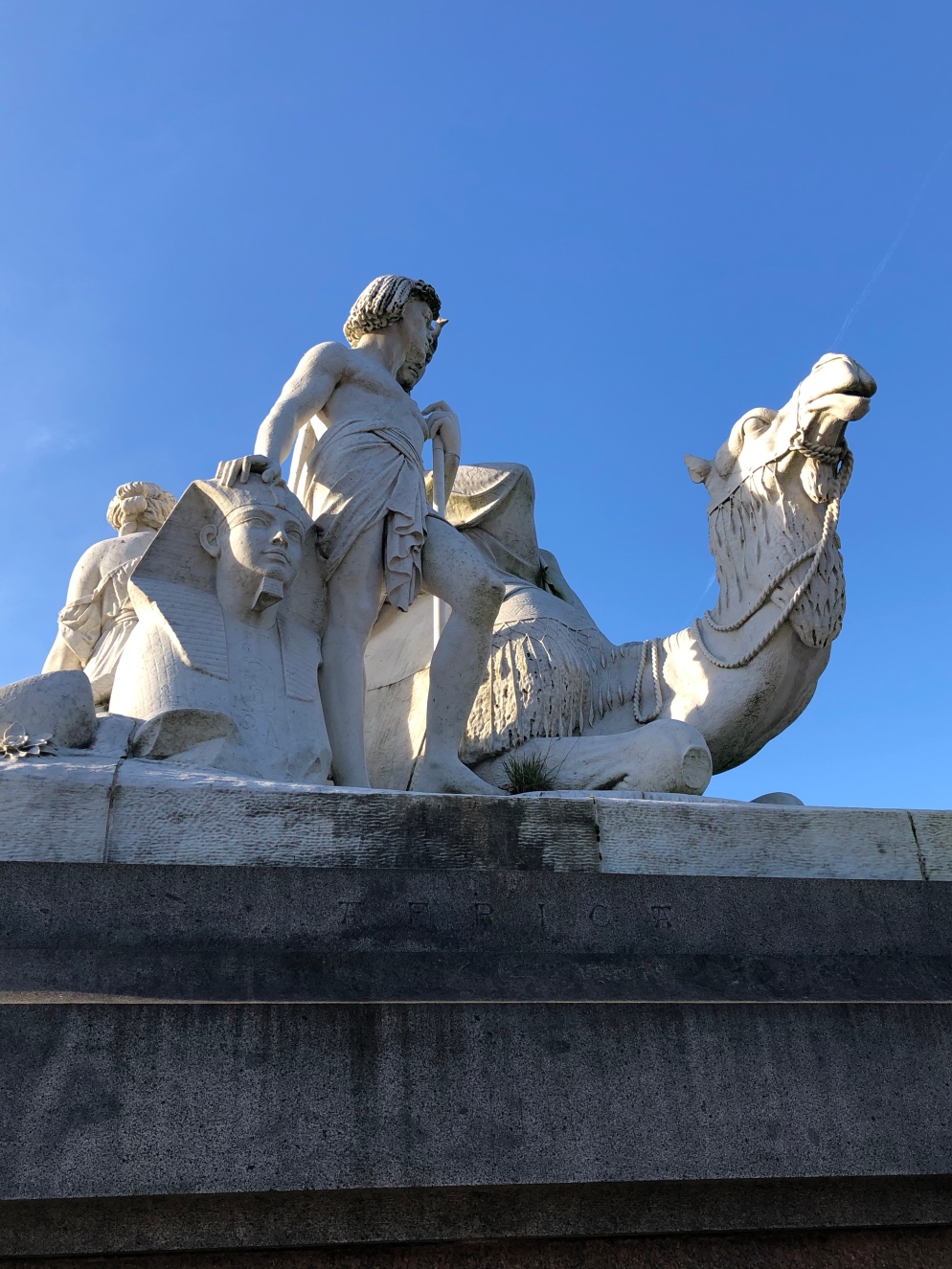 I took my seat in the Royal Albert Hall in good time and, whoop, I was on the front row! Great view!

I was slightly disappointed to have a net in front of me, and I experimented with taking photos through the holes, until, that is David Ferrer and Juan Carlos Ferrero took to the court and started practising their serves! I’ll take a net on my photos over a one hundred plus mile per hour tennis ball in the nose!

My photos aren’t great because of the net and because the iPhone isn’t great at capturing action photos, but as well as Ferrer and Ferrero … 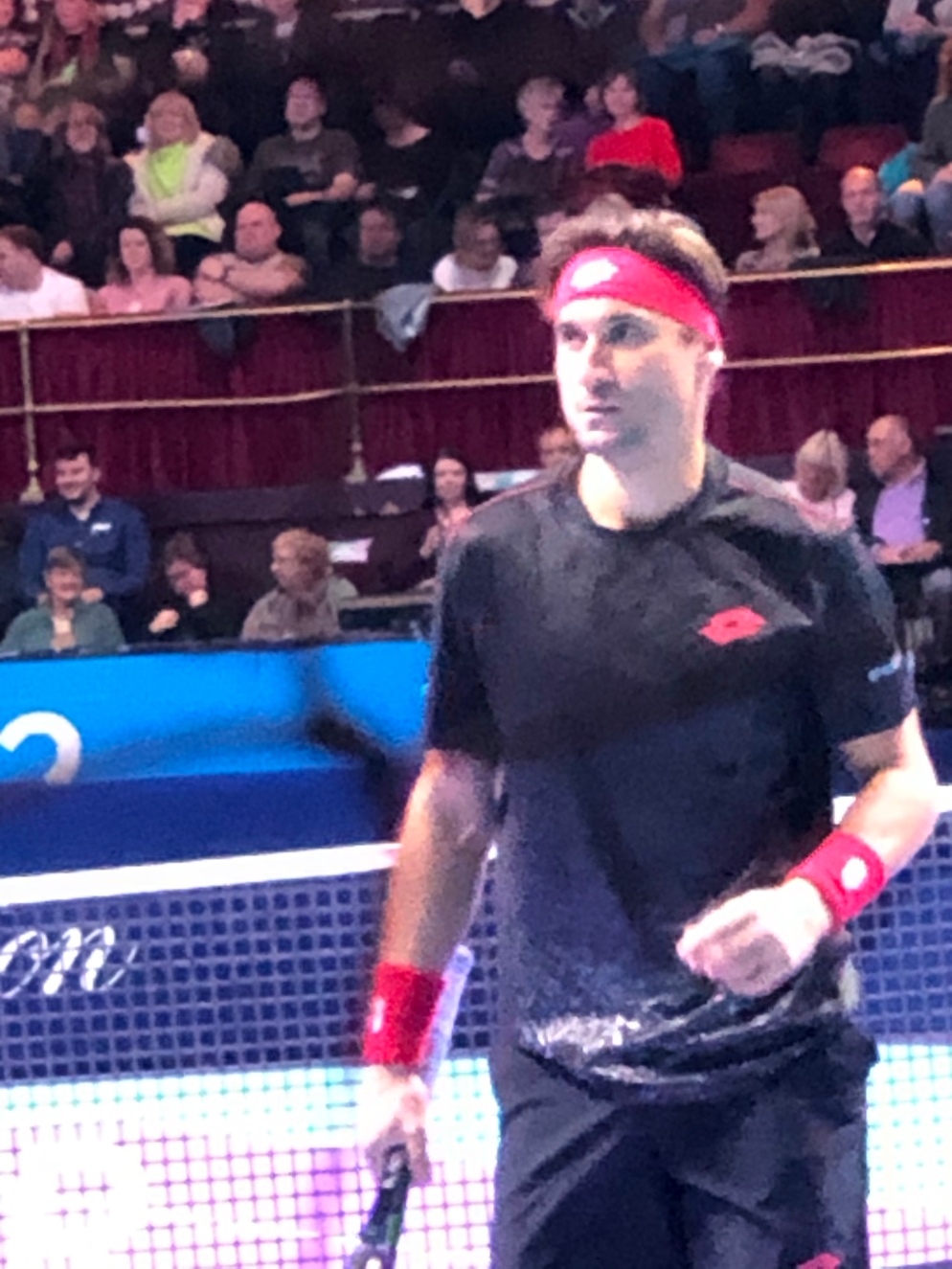 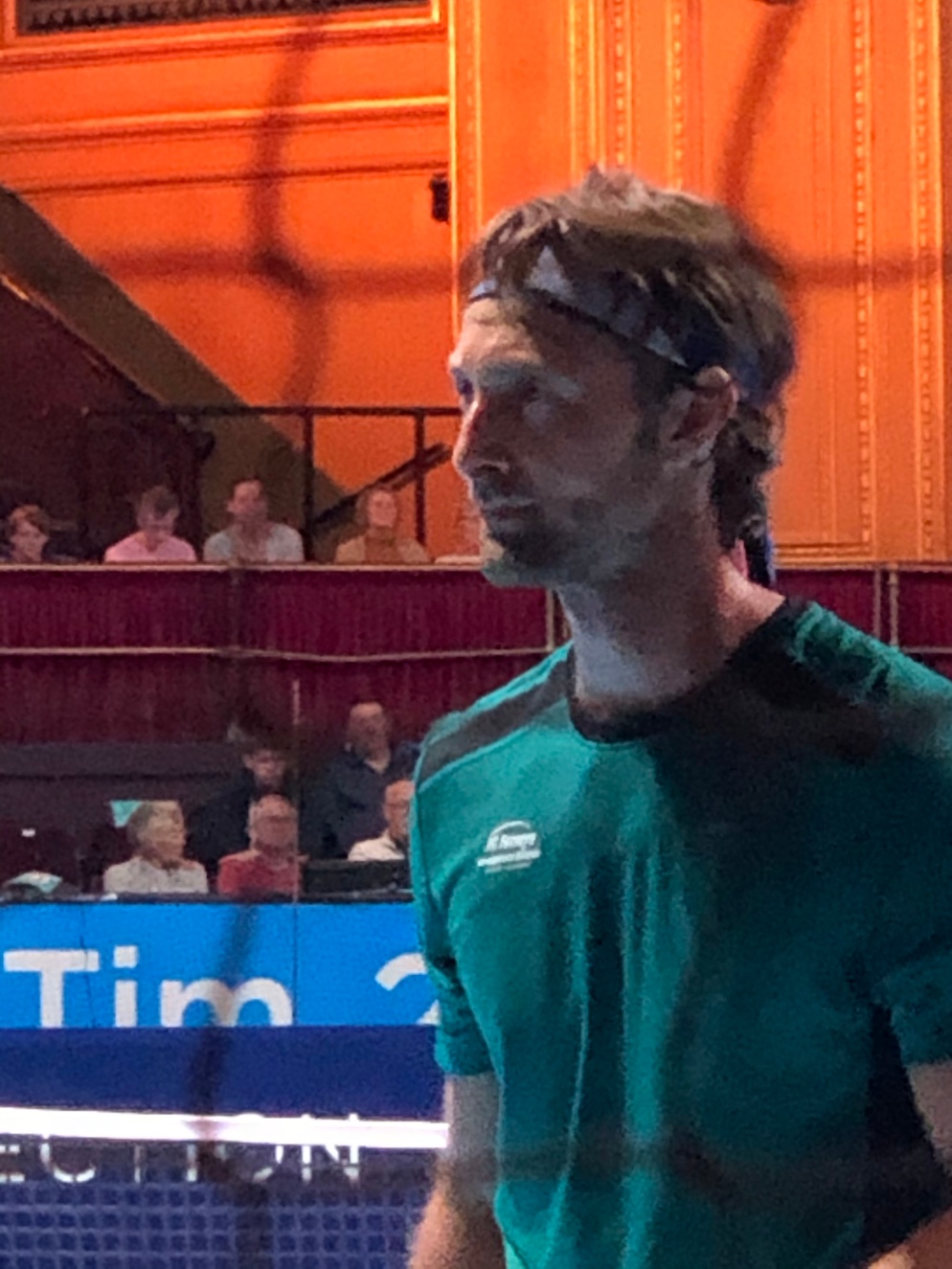 There was also an exhibition doubles with Heather Watson, Martina Hingis, Thomas Enqvist and the ever popular Mansour Bahrami.

… and he was very impressed with the new Gringotts exhibit which hubby and I saw back in May.

On Sunday we went to the Good Food Show with my sister-in-law and brother-in-law and again I forgot to take any pictures! It was a good day though. We sampled lots of gin, cheese and curry and managed not to spend too much money on gimmicks! Last year we all bought frying pans which were supposed to revolutionise our cooking lives. Needless to say, said frying pans ended up in the bin quite quickly when they failed in their promise! I did buy several skinny syrups which I’m now enjoying on my porridge and baked oats in the mornings.

This weekend has been much more about upcoming festivities. On Friday I went to Resorts World to check out the shops and grab a bite to eat, and they’re in full on Christmas mode. 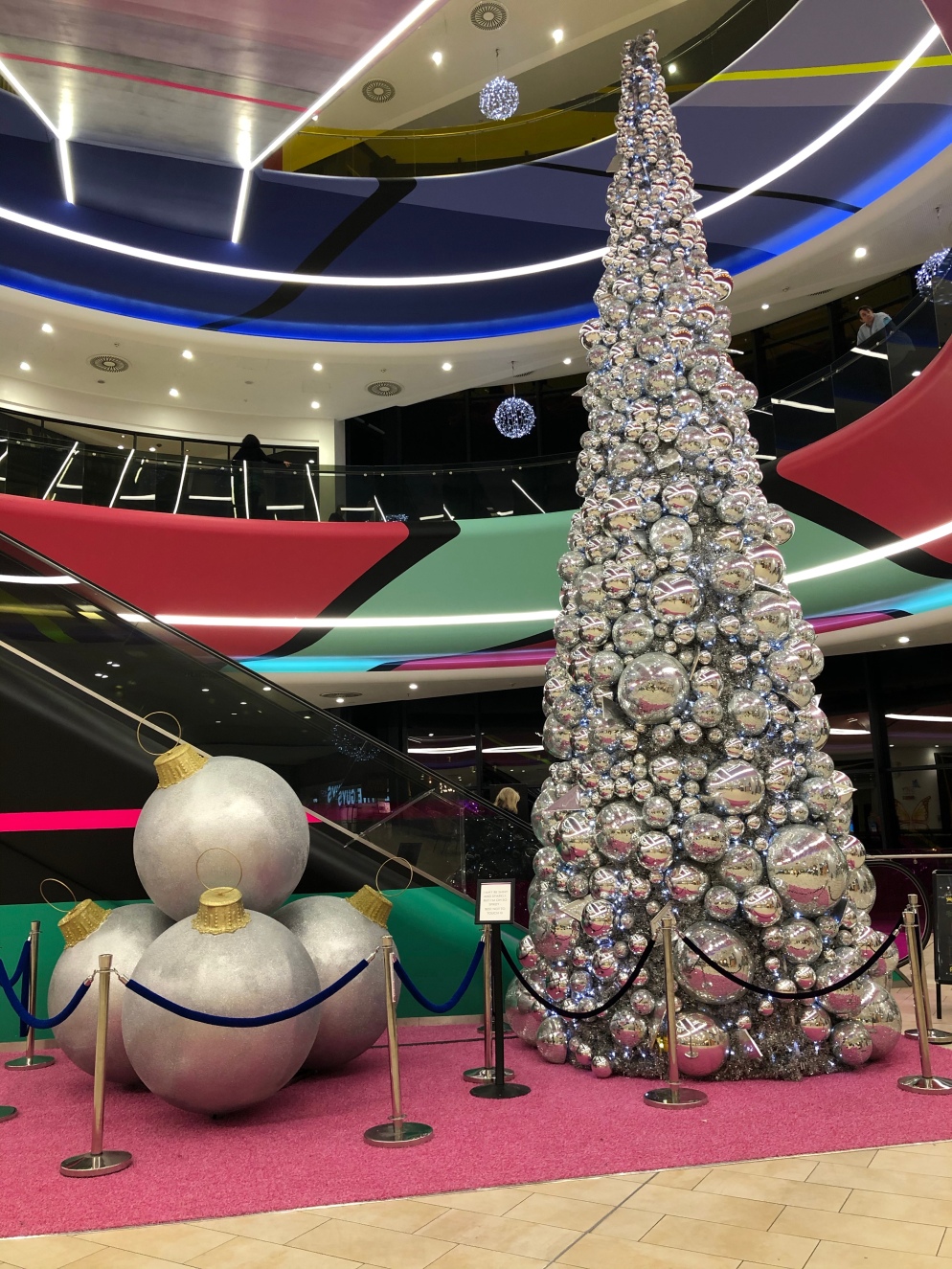 It seemed the right time to get festive at home, so, the decs are up! 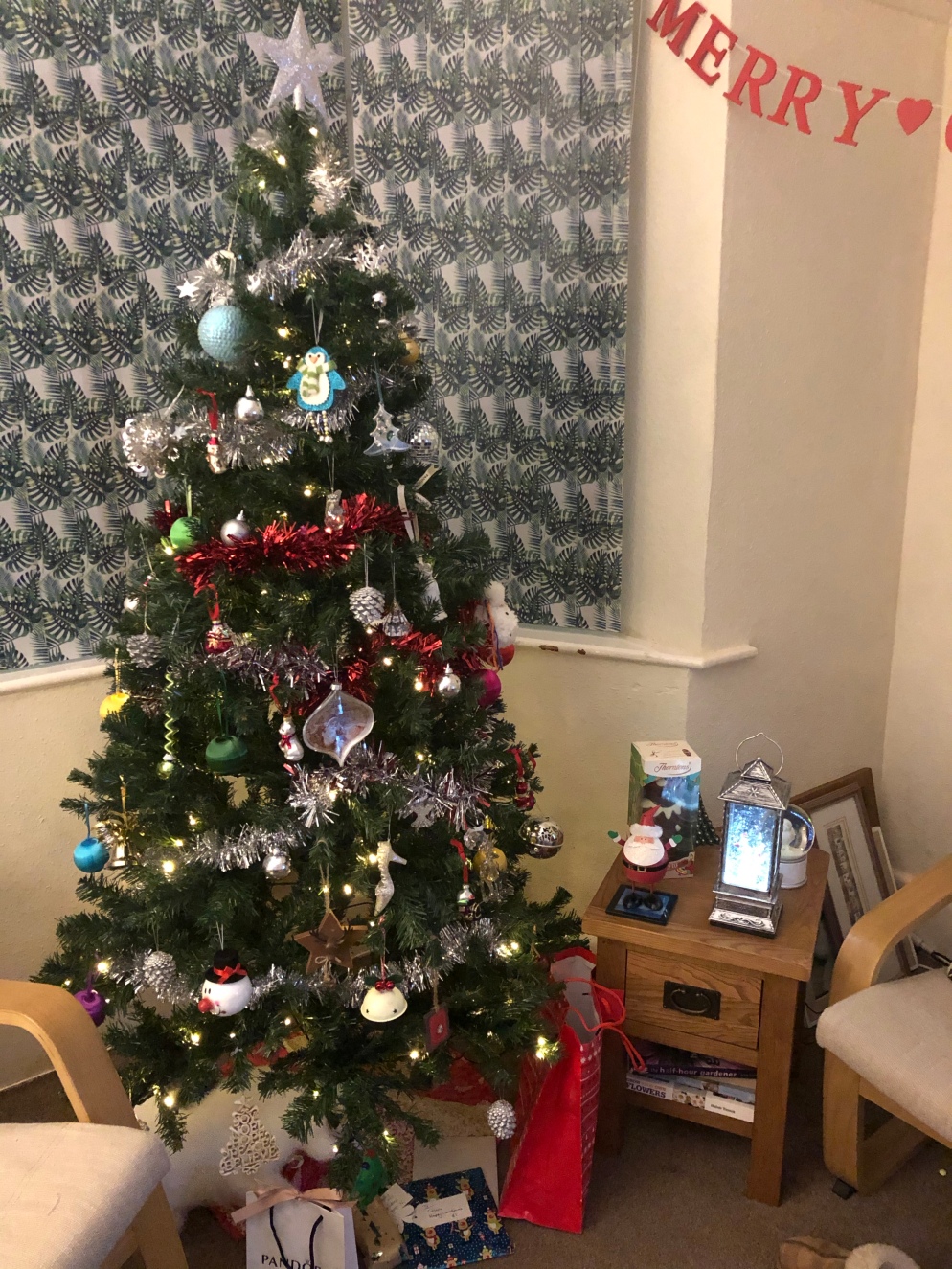 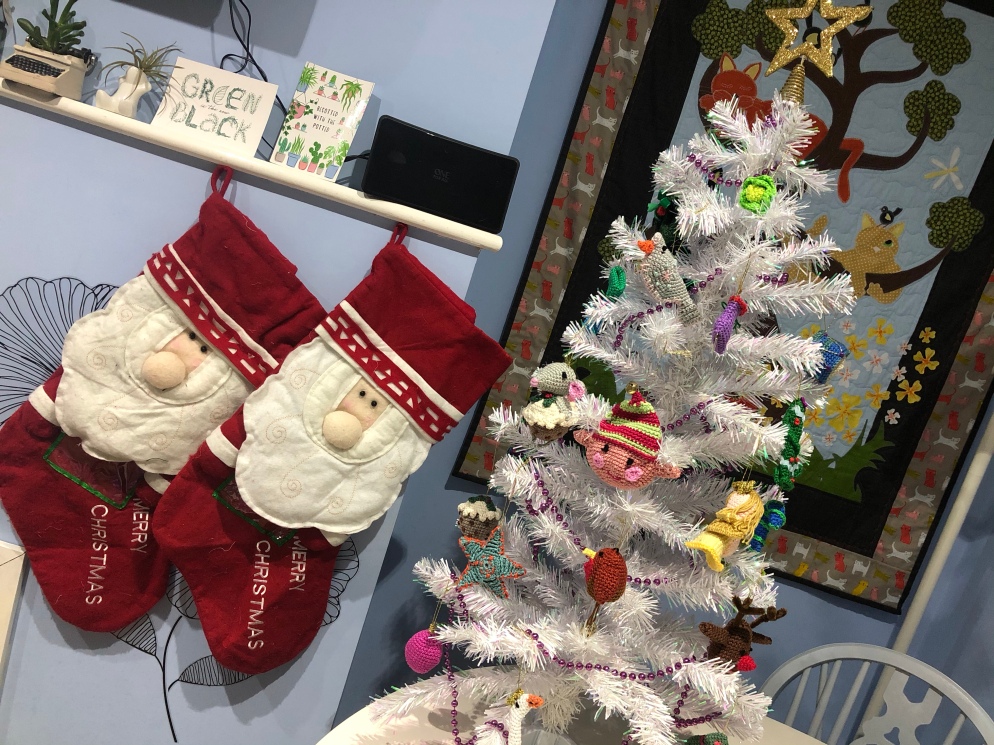 So, there you have it. A round up of the last couple of weeks. Hopefully it’s not too disjointed, but if it is,just remember …. eclectic!

2 thoughts on “Quick Catch Up”