I trundle along through life, as one does, trying to make the best of the virtues with which I was lucky enough to be born and appreciating the opportunities and joys which come my way but I’ve always been of the opinion that I missed my vocation (who hasn’t?) The problem was, I didn’t actually know what my vocation was. Well, folks, I think I may have found it this morning! Far too late to do anything about it (mortgage to clear, holidays to book, plants to buy) other than use it to brighten up my life and living room, but it’s quite a revelation to have found something that I appear to excel at without really trying, and which I really enjoyed. Of course, you good people might disagree once I reveal the product of my new found talent (self esteem, it would seem, I do not excel in) but I’m very pleased with it so I shall studiously ignore any criticism!

It started off when I went for a pootle around the garden to snap some photos to use for a Six post and I noticed that my Sweet Peas had produced more beautiful flowers. Monty Don advises to cut your Sweet Peas every eight to ten days to ensure a steady stream of blooms throughout the Summer, and I only gathered my first posy on Monday so I wasn’t expecting more just yet.

This was my first display. 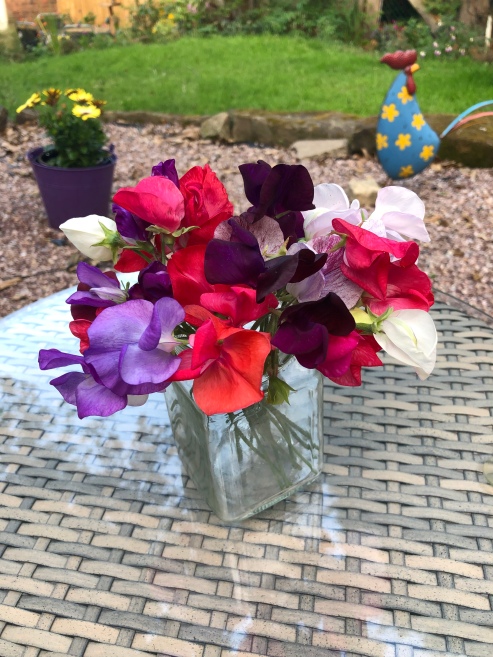 They really don’t last long. They’d mostly faded when I looked this morning.

I was really enjoying my pootle, checking out progress in my veg plot, marvelling over the colours in my Coprosma and squinting at the tiny purple flowers appearing on my Callicarpa Bodinieri (which I assume will give rise to its purple berries in Autumn), but it started to drizzle so I got on with cutting my Sweet Peas (which is number one of six).

I got quite a good bunch, as you can see, but as I was gazing at them and drinking in their heavenly scent, I thought to myself, some yellow would really look good with these to break up the pinks and purples and highlight the whites, why don’t you get yellow Sweet Peas?

So, I decided to add some and headed for my Coreopsis Grandiflora. As I wandered down the garden my Ox-Eye Daisies waved at me in the breeze. Yes! I thought, daisies look stunning in bouquets, so I gathered up both (number two). 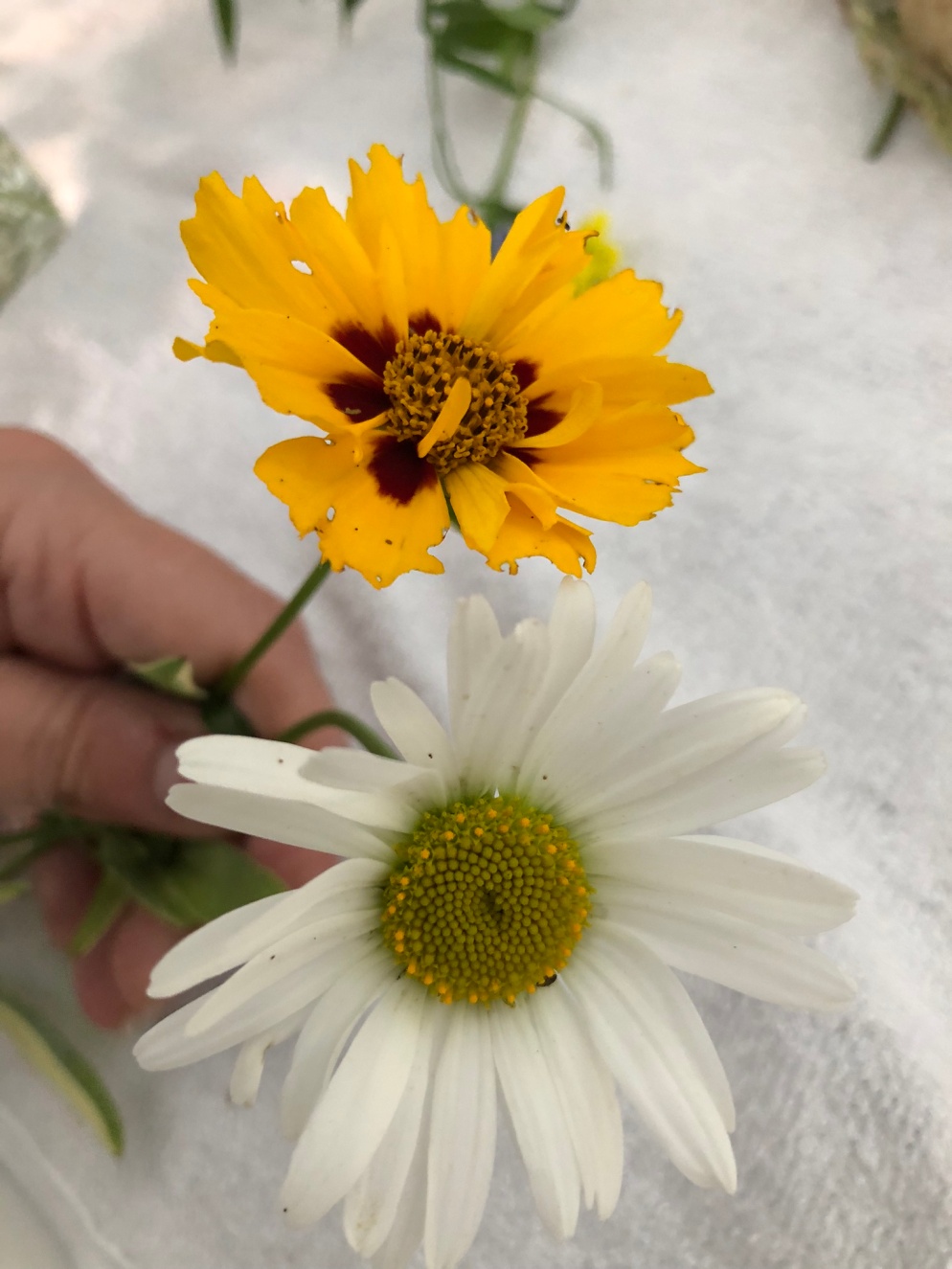 As I headed back up the garden to collect my Sweet Peas, my eyes were drawn to my Cosmos. Apt, I thought, given that my Sweet Peas and Cosmos were raised from seed side by side in the greenhouse (number three).

We have an abundance of hardy Geraniums in the back garden. More and more every year as they self seed to their heart’s content. I may have to divide some of them somewhen, but for now I decided to include them in my posy as a nod towards their ever presence. They are quite attractive with their veins of dark purple. Another plant that is self seeding all over the place is Oxalis. Considered a nuisance by some, we don’t have enough of it (yet) for me to be troubled by it. These two pink pals are number four.

Any good bouquet has a Rose in it. I hesitated at first, because I do love my Roses as nature intended them, but after umming and ahing for a while I decided that the two Roses which best matched the colour scheme had enough blooms to spare a couple for my display, so here’s number five.

Do you spy my little green snips in the background? These have come into their own recently – they’re perfect for the delicate little cuts needed for Sweet Peas and their tendrils.

Finally I decided that if weeds will insist on making repeat appearances in the garden, so much so that I can’t possibly keep on top of them, then they may as well make themselves useful. Number six, then, is wonderfully weedy! 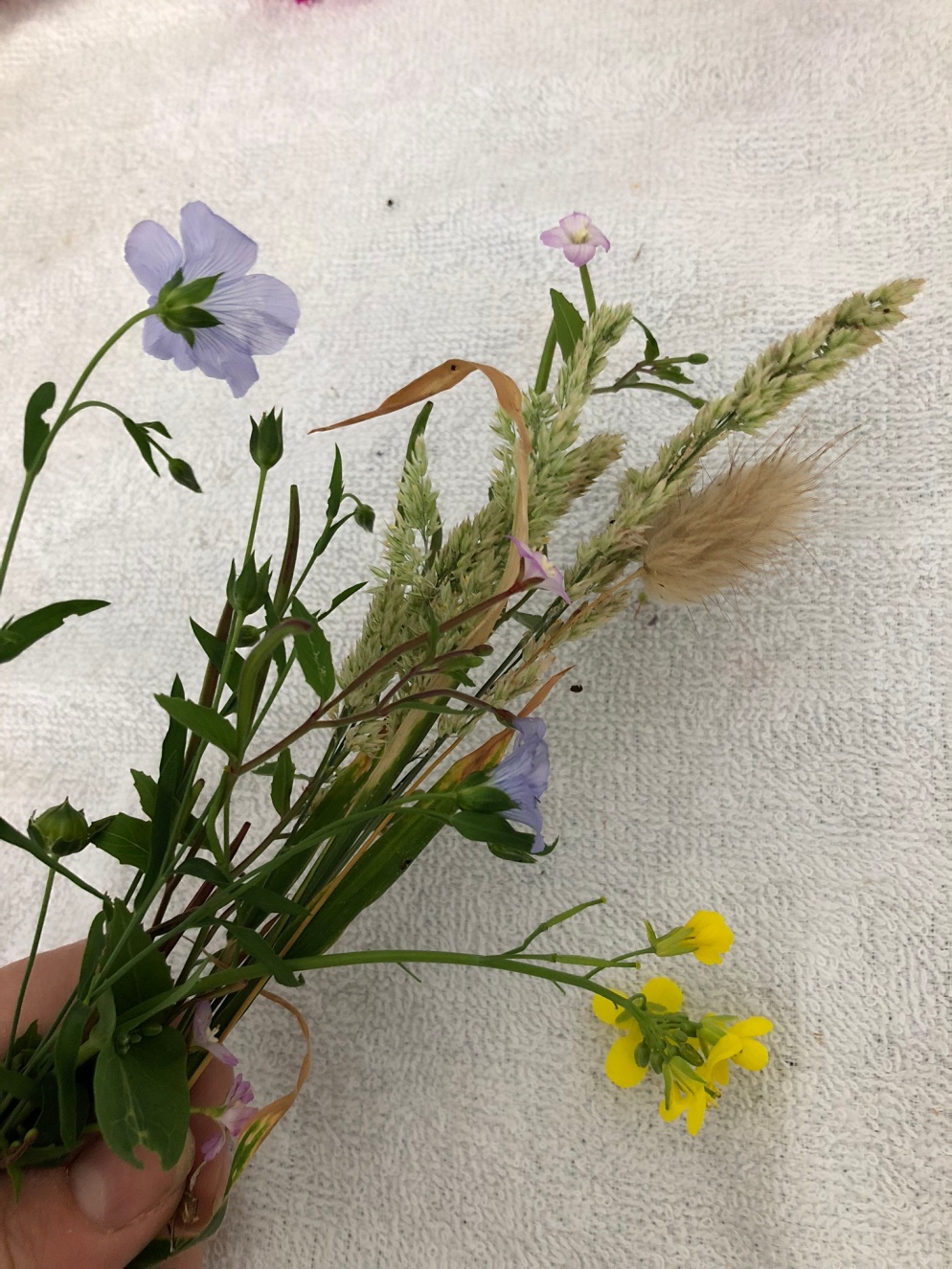 One of these isn’t a weed it’s one of my Hare Tail grass ears that I got from Gardeners’ World Live, but it seemed to fit with the the rest of these goodies so I included it. Apart from that, there is normal grass and a flower from Herb Robert, but I don’t know what the blue and yellow flowers are. The yellow looks like a tiny Cowslip (but definitely isn’t) and the mystery blue is lovely and delicate. Several of them have appeared in our path.

So there you have my Six, and soon I get to reveal the finished arrangement, but first a couple of ‘along the way’ photos.

I love this. It reminds me of place mats that you used to get in the eighties and nineties that had drawings of plants with their scientific names written on in scrawny writing. I’m sure most households of my family had some of these (and I suspect some still have – waste not want not).

Here they are all bunched up, as they were when I brought them in.

I really need to get one of those light box things for taking photos rather than having to balance tea towels on various kitchen utensils to get a decent background!

Here they are in situ, up high on the wall because the Sweet Peas at least are toxic to cats, and even if they weren’t, I don’t want my beautiful arrangement to be chewed by feline teeth! I hope you’re not disappointed after all my self indulgent hype up! 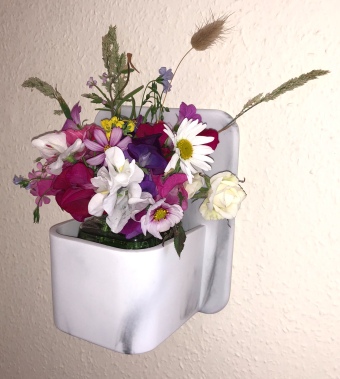 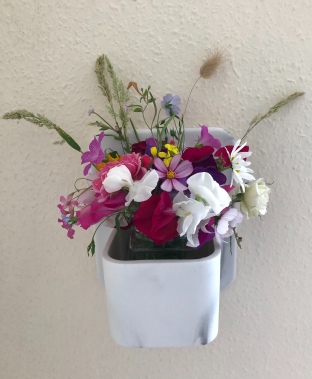 I couldn’t decide whether they looked better with or without flash so I’ve included both. The two on the left are with and the one on the right is without.

If you want to check out more Sixes, pop over to the Propagator’s page and have a snoop in his comments.