The weekend began with a meal out on Friday night for my very good friend’s birthday.

We went to the Albert in Tamworth which, as you can see, doesn’t look massively special from the outside, but the food was delicious, and the service was good, and the company was excellent.

On Saturday hubby and I went on a bit of a garden centre crawl! We went for lunch at Wyevale, which we seem to have got into a habit of doing and we need to break the habit because it’s expensive both in cash and calories! I didn’t buy any plants, but I did come out with this beauty. 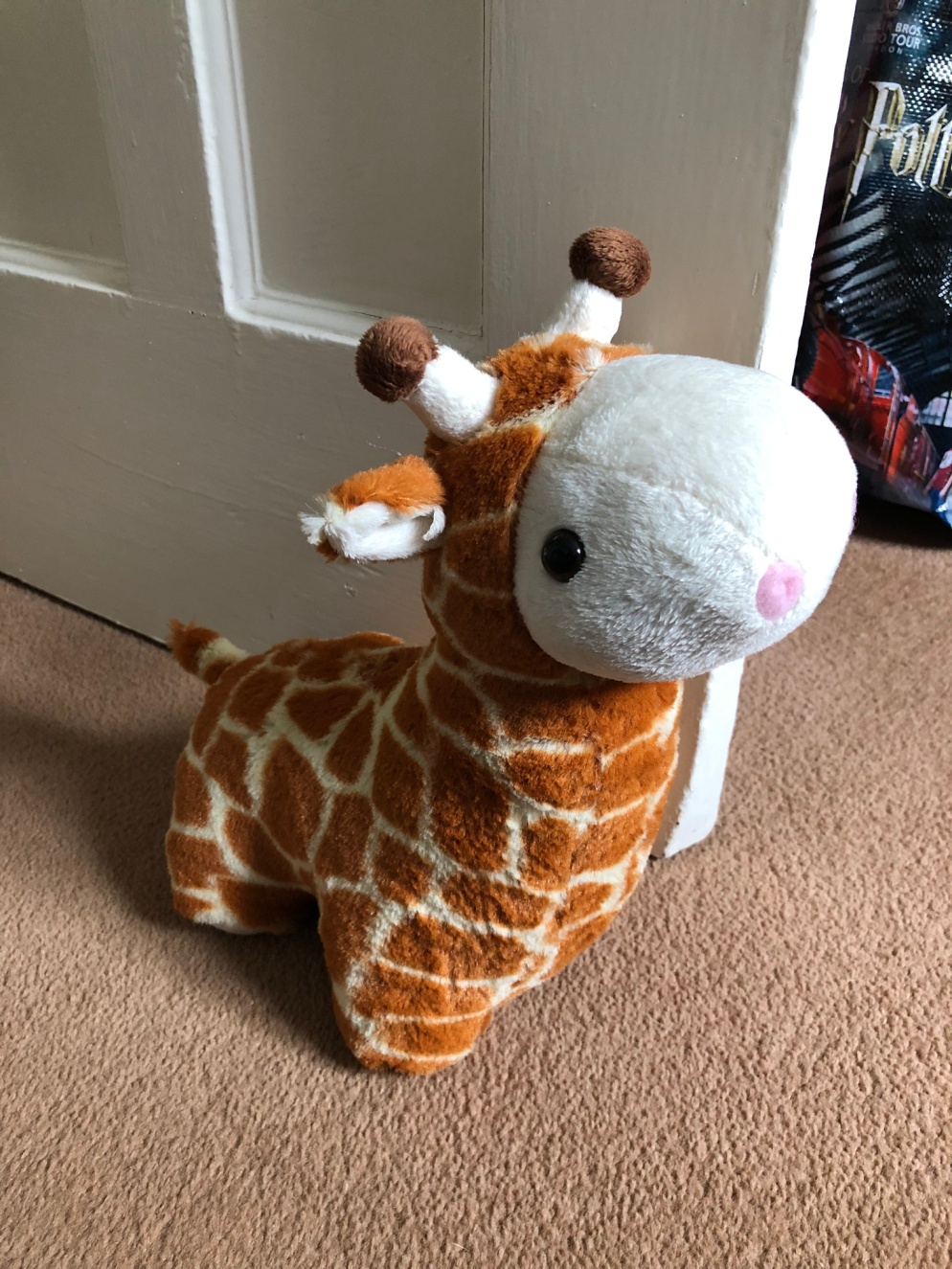 Next we decided to have a look in the garden centre at Homebase but it was very disappointing – loads of bedding plants and not a lot else – so we decided to pop into our local garden centre, Halls, as recompense. Good move! I picked up a couple of plants from the sale table.

On the left is a Leucothoe and on the right is a Hellebore.  Both were half price, but they’ll both be fine with a bit of care. This is my third Hellebore now, and I like them because they’re evergreen and they flower over the Winter and early Spring when the rest of the garden is sleeping.

On Sunday, we had a day trip and overnight stay planned. We put loads of biscuits down for these two … 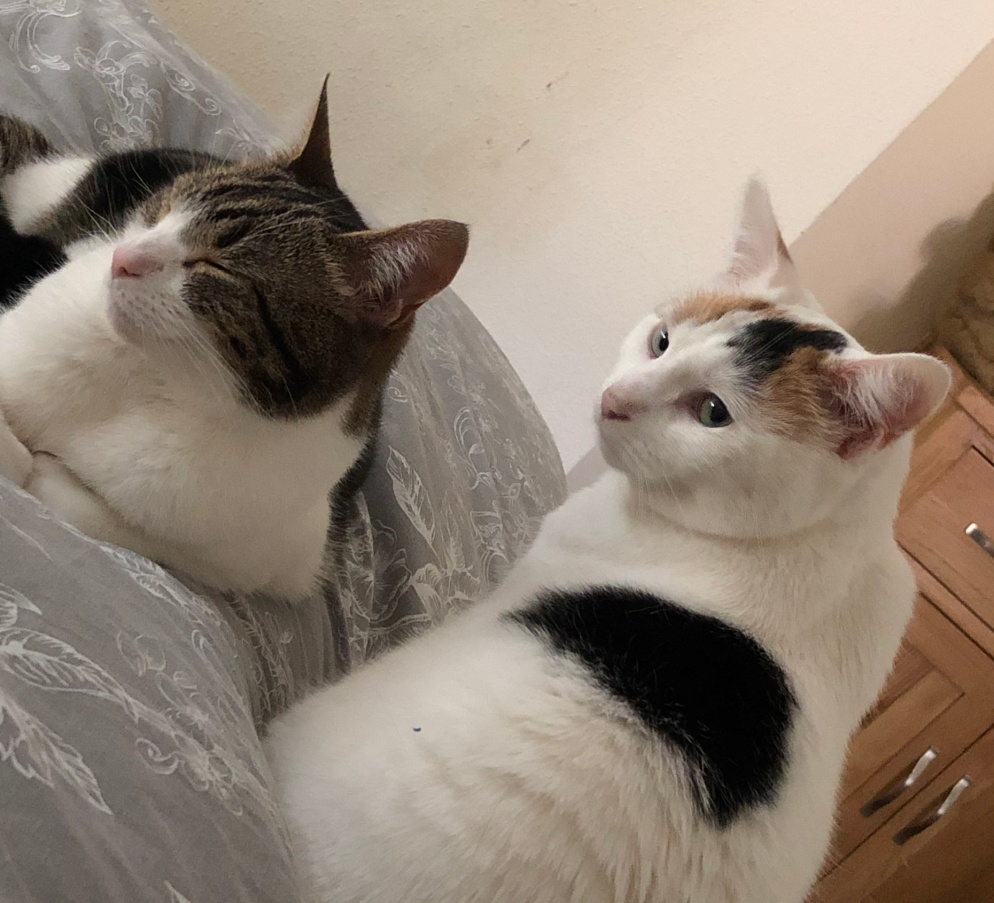 … reassured them that we weren’t leaving them for long and headed off down the M40. Destination? 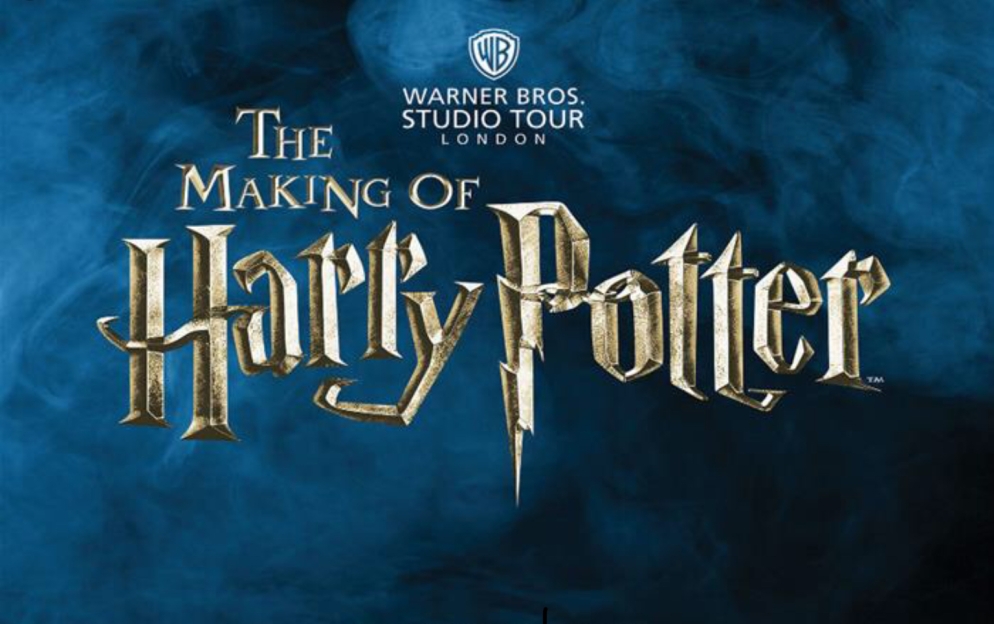 Huge excitement! This was the fourth visit for me, but the first for hubby. However, there were first time experiences for both of us. First up they’ve completely changed the entrance to the tour. Now, rather than the main attraction in the queuing area being the cupboard under that stairs which was Harry Potter’s bedroom for the first eleven years of his life, you’re greeted by this sight.

After this, the first half of the tour was largely unchanged, but it was great to see hubby’s reaction to it all, and I’ll never tire of gazing upon Harry Potter artefacts.

We entered through the Great Hall which was as awesome as ever. 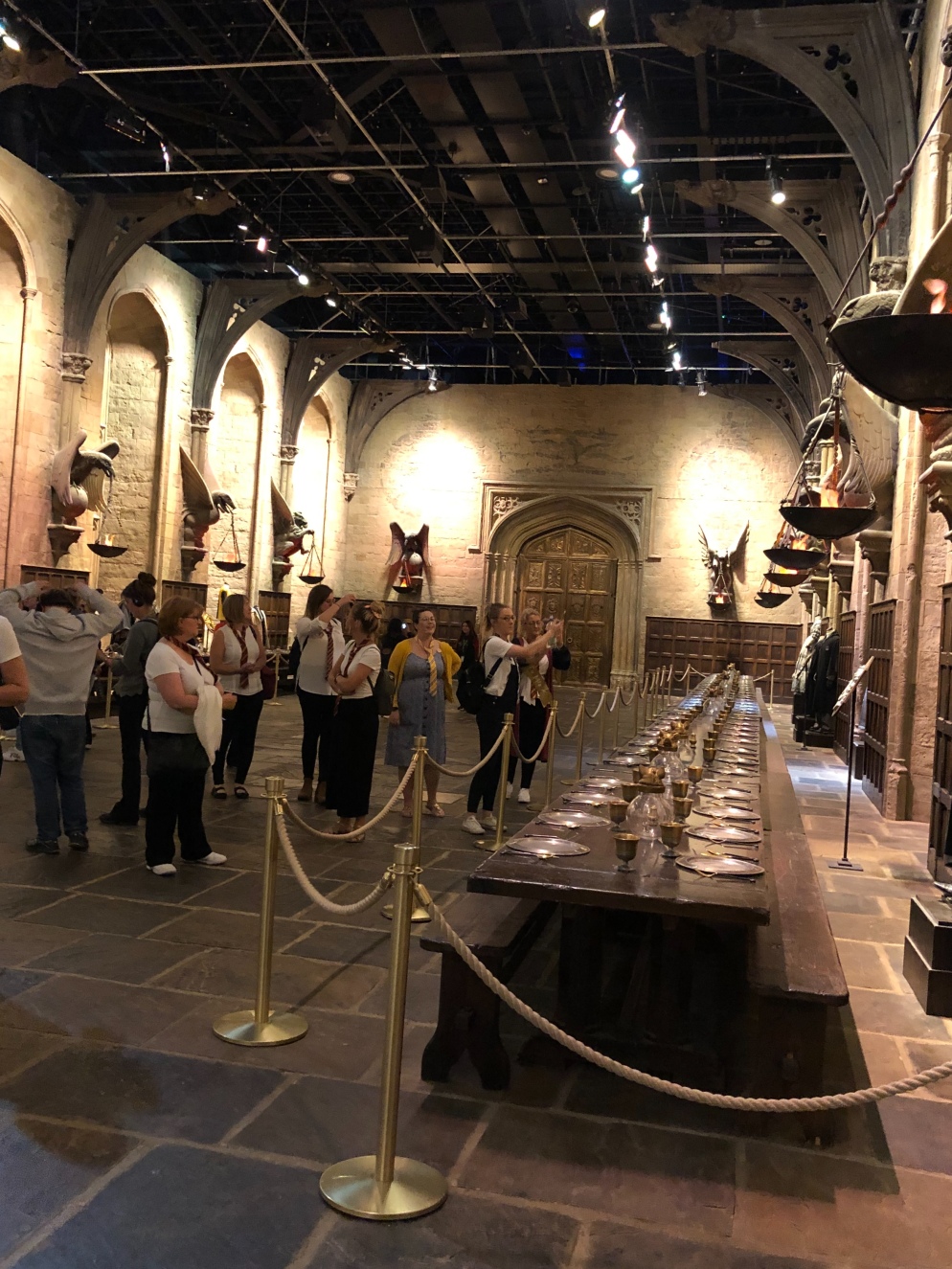 See the women with Hogwarts house ties on? They were on a hen do – what an amazing activity for your hen do! 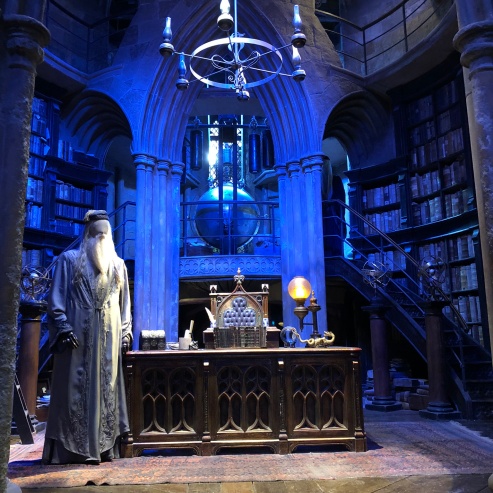 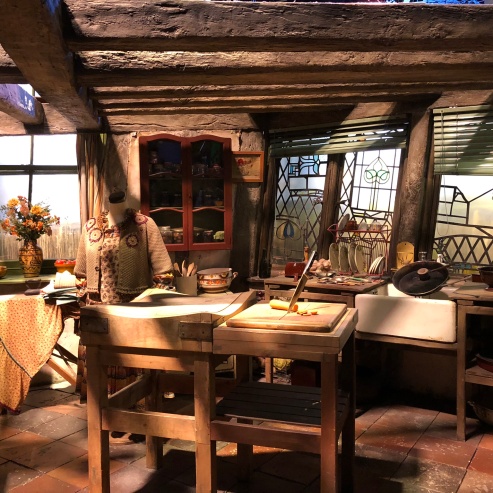 Just a few of the sets (and they are the actual sets which were used during filming). Top left and going clockwise, the boys’ dormitory – see the RW on the trunk under the closest bed? Ron Weasley’s trunk. Then Dumbledore’s office – this looks exactly as it does in Hogwarts in Orlando. The Burrow, residence of the Weasley family. The magic is very much evident here with a jumper knitting itself, dishes washing themselves and a knife chopping a carrot completely independently. Finally the Gryffindor common room complete with Hermione’s and Harry’s outfits. 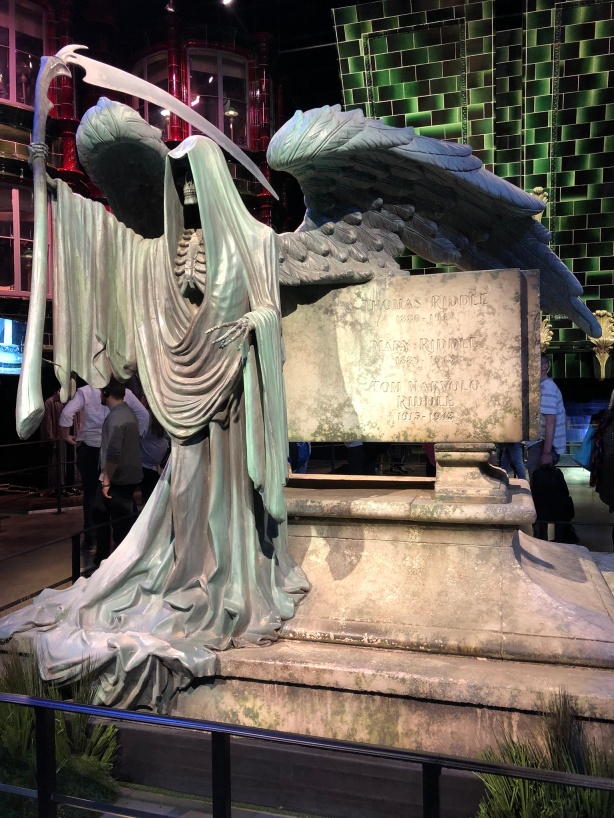 This is Tom Riddle’s grave on the left, which is somewhat more elaborate than the grave that I saw in Edinburgh in February, on the right, which was allegedly the inspiration for JK Rowling to create Tom Riddle.

After the sets is the Hogwarts Express which was the first major change to the tour a few years ago and was the reason for my second visit.

This is swiftly followed by the reason for my third visit, the introduction of the Forbidden Forest exhibit.

As well as the giant spiders, which move in and out of atmospheric smoke, in the Forbidden Forest you’ll find Buckbeak the Hippogriff and Hagrid.

Next we moved on to the first attraction within the tour that was new to me.

4 Privet Drive. The house has been there from the beginning, but now you can go inside and there’s a scene in the living room of all the Hogwarts letters flying around.

Next we moved on to the reason for visit number four, and the part I was most excited about – Gringotts. 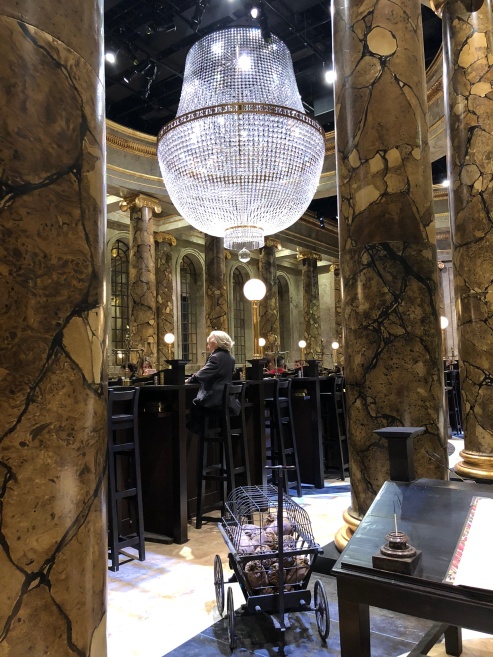 This is the bank run by goblins, and where anyone who is anyone in the Wizarding world has a vault full of treasure. This section of the tour was amazing! I didn’t expect them to have done it so well! It looks so like Gringotts in Orlando that it felt really strange not to be heading behind the head goblin teller to ride the Escape from Gringotts ride, but we soon found out that there was even more to the exhibit than just the main floor of Gringotts. There are other items on display and there’s even a replica set showing Gringotts after it’s been ravaged by a dragon, and there’s an exciting extra which I won’t ruin for anyone who might go.

After I dragged myself away from Gringotts, I knew I still had two treats to come. Namely … 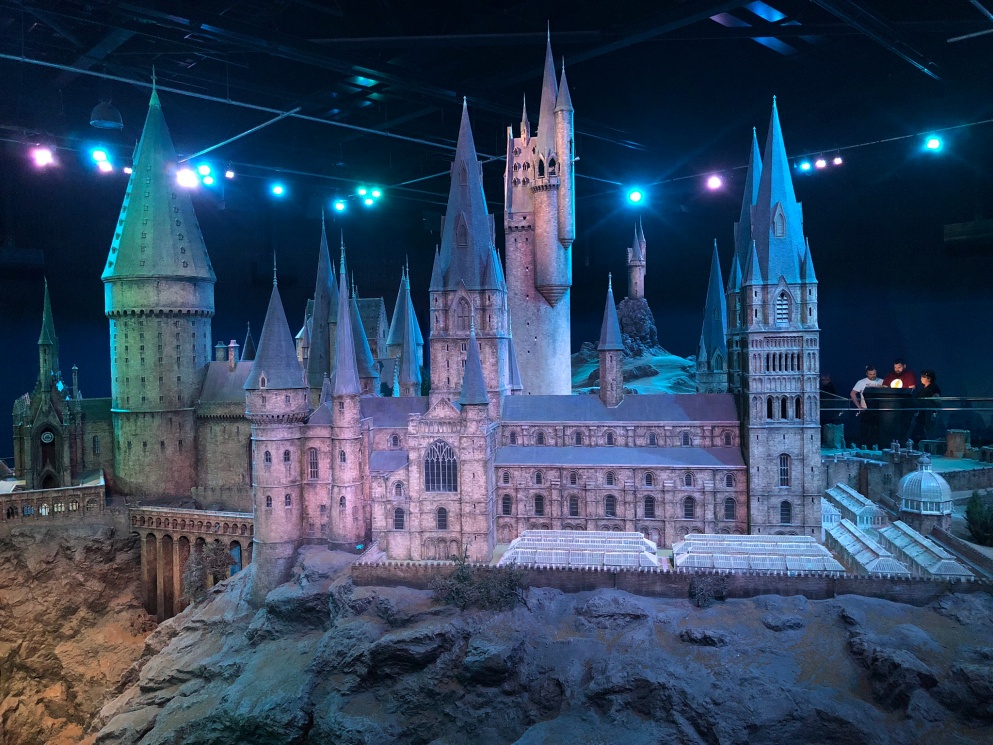 Amazing, incredible day! I’d recommend a trip to anyone. Even if you’re not a massive Harry Potter fan, it’s still worth a visit. Oh, and the shop is AWESOME!

We reluctantly left the world of Potter behind, but were soon feeling excited again because we were heading for a visit with my ex-boss and and his wife who live nearby. R retired at the end of April, and we’d had this visit planned for months. I worked for R almost continuously for fifteen years up until I moved to my current job and we had a great working relationship which, over the years had developed into a great friendship. I’m very sad that I don’t get to see him very often now, but I’m happy for him that, after seriously paying his dues to the company for over forty five years (I know!) he now gets to relax and do the things that bring him joy. His retirement also gave me the opportunity to meet his lovely wife, and for the two of them to meet hubby.

We went out for a delicious Italian meal in St Albans, and as I knew we would, had a great evening and all got on like the proverbial house on fire. I have lots of family who live down south, so hopefully we’ll be able to meet up when I’m en route to them – gives me a good excuse to take a whole day off work as opposed to my normal half day!

We headed back this morning after having a guided tour of the garden, which I was very interested to see because R is a keen vegetable grower so I was intrigued to compare his fledgling seedlings to mine.

Speaking of which, despite having caught hubby’s cold (the only down side to the whole weekend!) I headed out to appraise our garden, and there’s good progress. 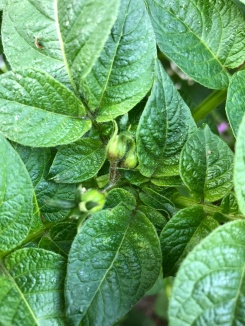 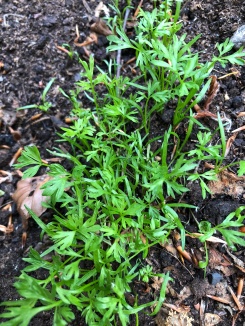 On the top row left to right one of the potato plants has buds. Strangely it’s the second earlies not the first, but hey, who am I to argue with nature? The carrot seedlings have developed their first true leaves so I definitely need to thin those out. The strawberries are starting to develop which means I need to sort out some netting to keep the birds off. They’re all mine! The peas are getting bigger so I’ll have to go on the hunt for some sticks for them to grow up.

In the greenhouse, bottom row left to right, I repotted the yellow courgettes because they’ve got quite big. I’m keeping two myself and I’ve got four more which are going to good homes. The purple carrots are now looking like proper carrot seedlings but they’re not quite big enough to pot on yet. Last but not least, the jalapeño seedlings and coriander plants are coming on nicely.

What a perfectly balanced weekend! Good food, exemplary company, an awesome day out and a bit of gardening! What could be better?

Oh, anyone know what this little fella is? 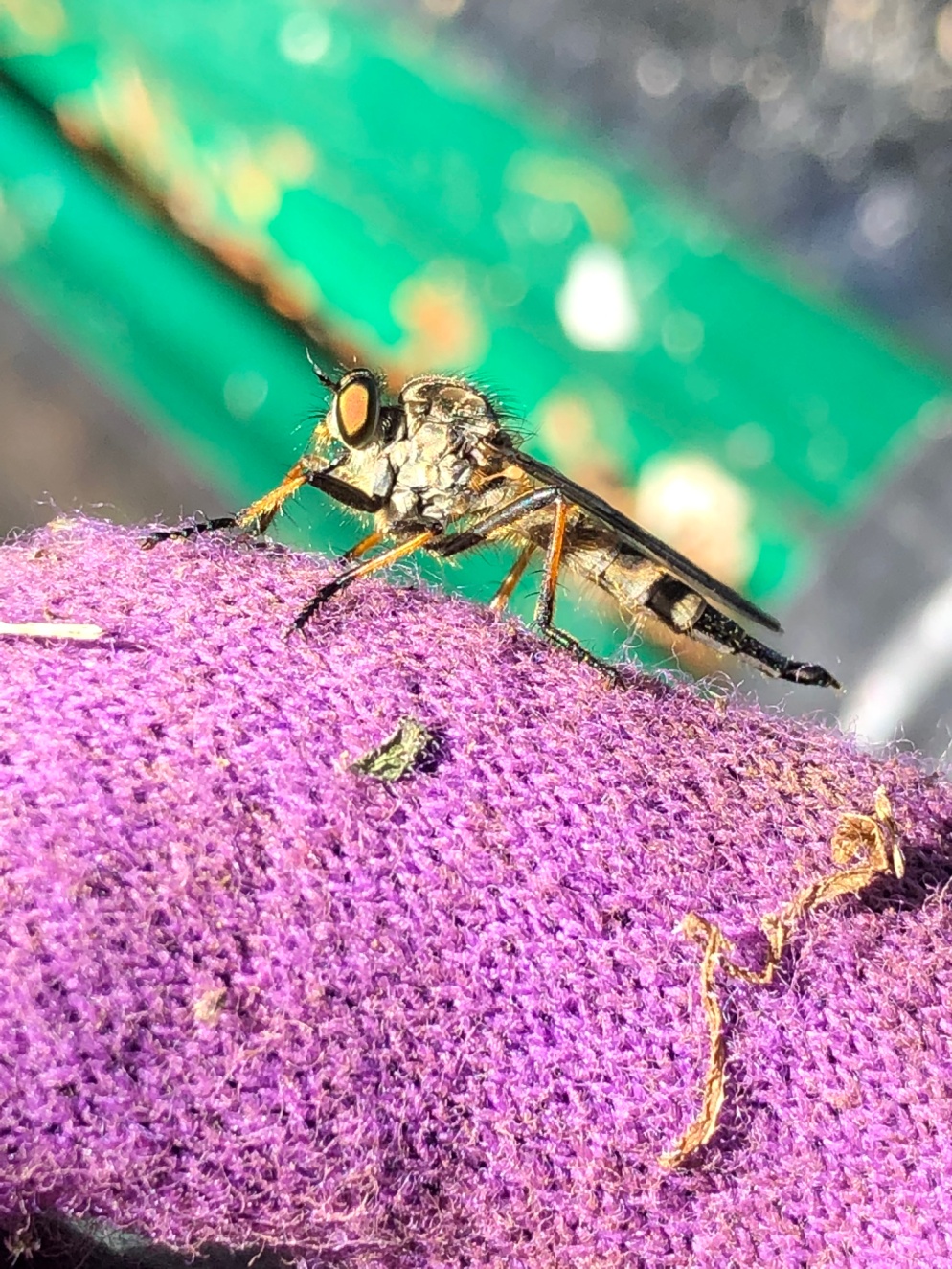 He took a liking to me!