One of the positives that I was clinging on to to help stave off the Holiday Blues (capitalised because they’ve felt suitably significant this week) was our garden. Orlando is my happy place outside of this country, but our garden is my happy place here (which is quite lucky really given that it’s just outside the back door!)

Right, how do I narrow down all the progress into six points? Not sure, I’ll give it a go.

I’m going to start with Funky Veg and Chillis and Spice progress. 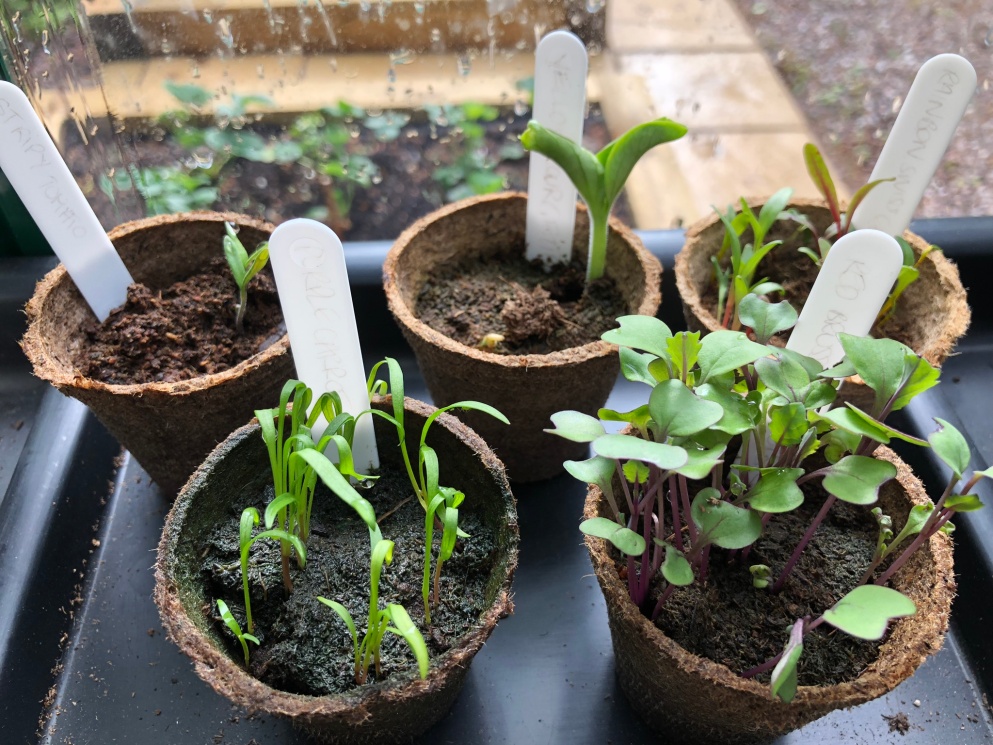 Prior to our holiday, I had a couple of teeny tiny Red Brussel Sprouts and Rainbow Swiss Chard and the Yellow Courgette was showing signs of life, but now look. They’re all growing. I’ve got two Stripy Tomato plants growing, the Yellow Courgette is well on its way (and the other six that I sowed as back up have all germinated and are actually bigger than this one so will have to be gifted out because seven Courgette plants is really not necessary for a two person household) and the Purple Carrots, Red Brussel Sprouts and Rainbow Swiss Chard are going to need thinning out really soon because loads have germinated. Whoop! 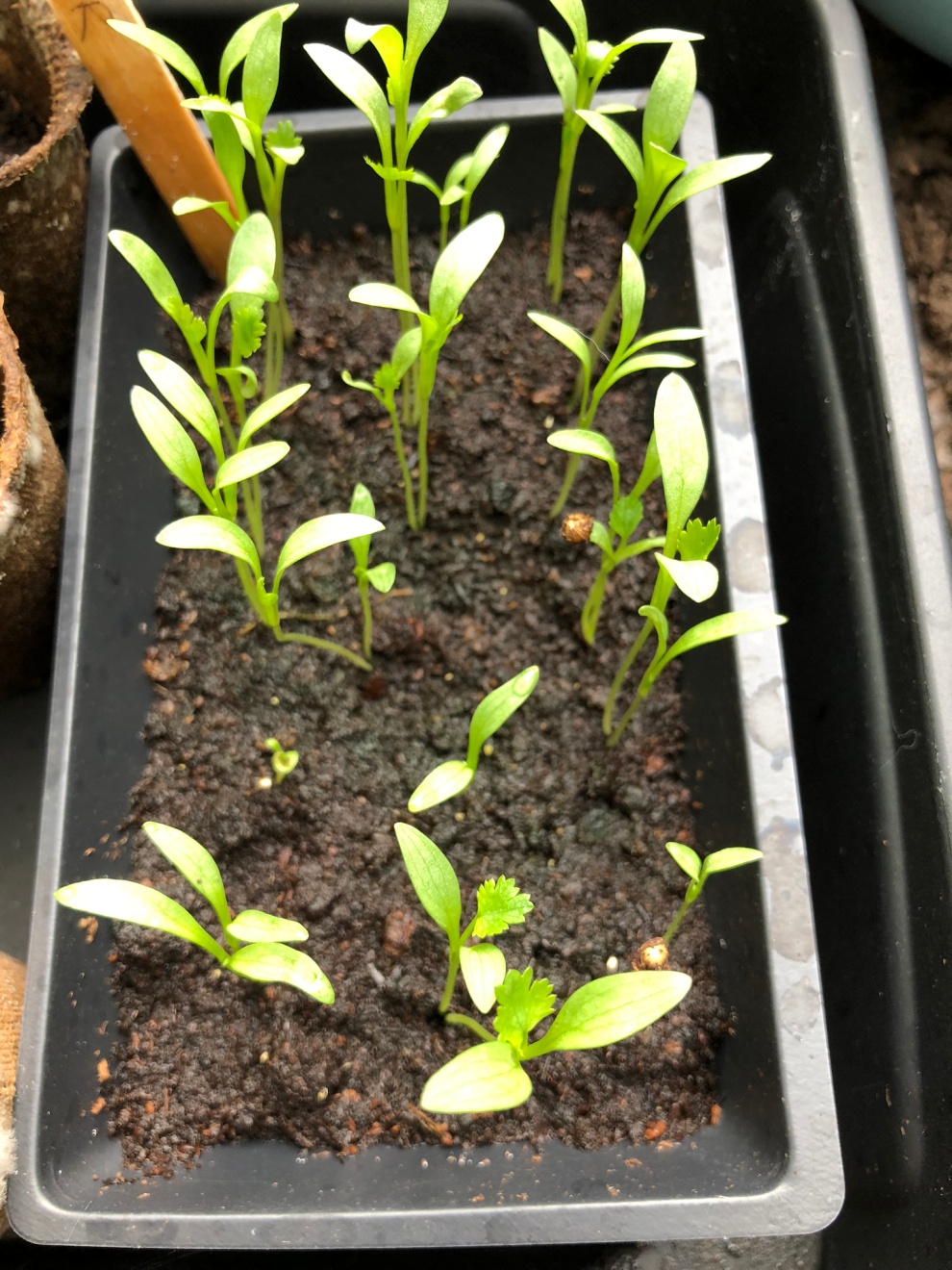 The Chillis and Spices aren’t showing such dramatic progress. The Habanero and Cayenne aren’t doing anything but I’m not giving up hope yet because I think they’re slow growing. I have several Jalapeños though and a couple of tiny Cumin plants and the Coriander is doing really well and is now starting to grow Coriander shaped leaves.

Next up? Raised beds. Nothing at all was showing any sign of life in the veg raised bed before we went away, but now …. 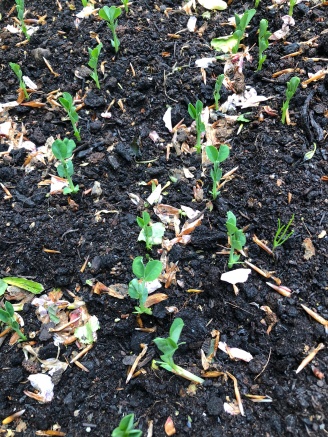 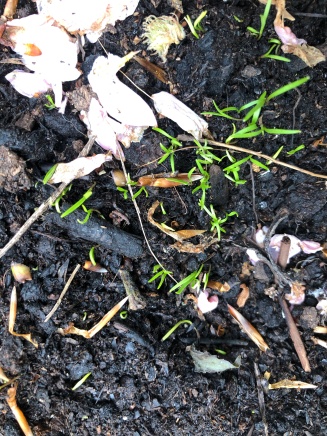 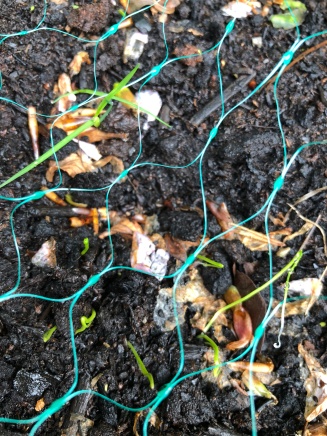 …. baby Peas (lots of ‘em), tiny Carrots (orange not purple!) and, hard to see because I was too lazy to take the netting off, the start of itty bitty Red Onions. Again, I’m going to have to do some thinning out, but I’ll let them get a bit bigger first so I can really see what I’m doing. No Leeks yet, but I think that’s normal.

On to Eupatorium progress. Ah, my beloved Eupatorium, and oh boy Pluto, what progress!

This first pic was taken when I first noticed the tiny shoots poking through the soil back at the end of March when I’d been convinced it hadn’t survived the Winter. 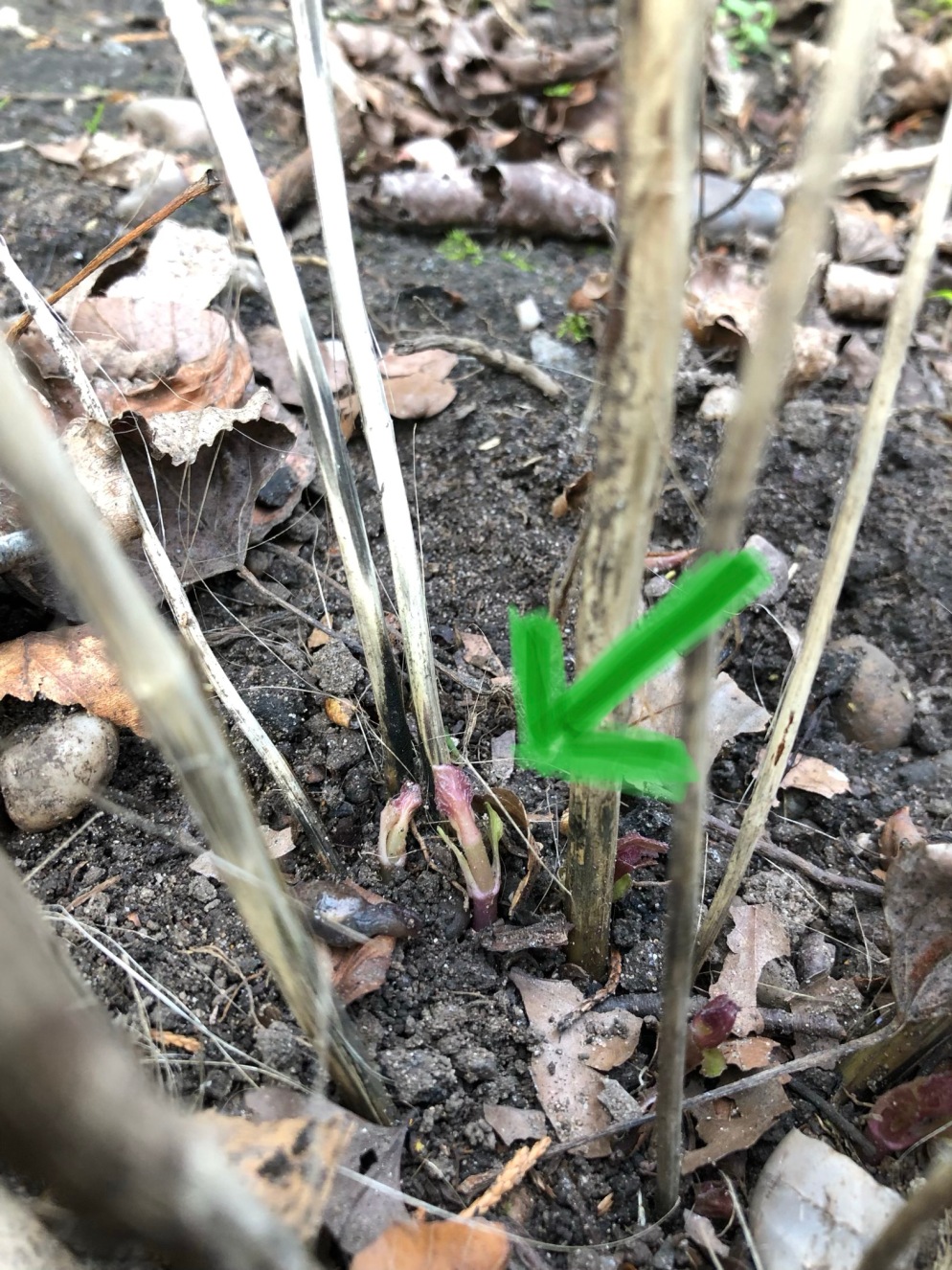 Now look at it. It’s in rude health and I’m so pleased about it. 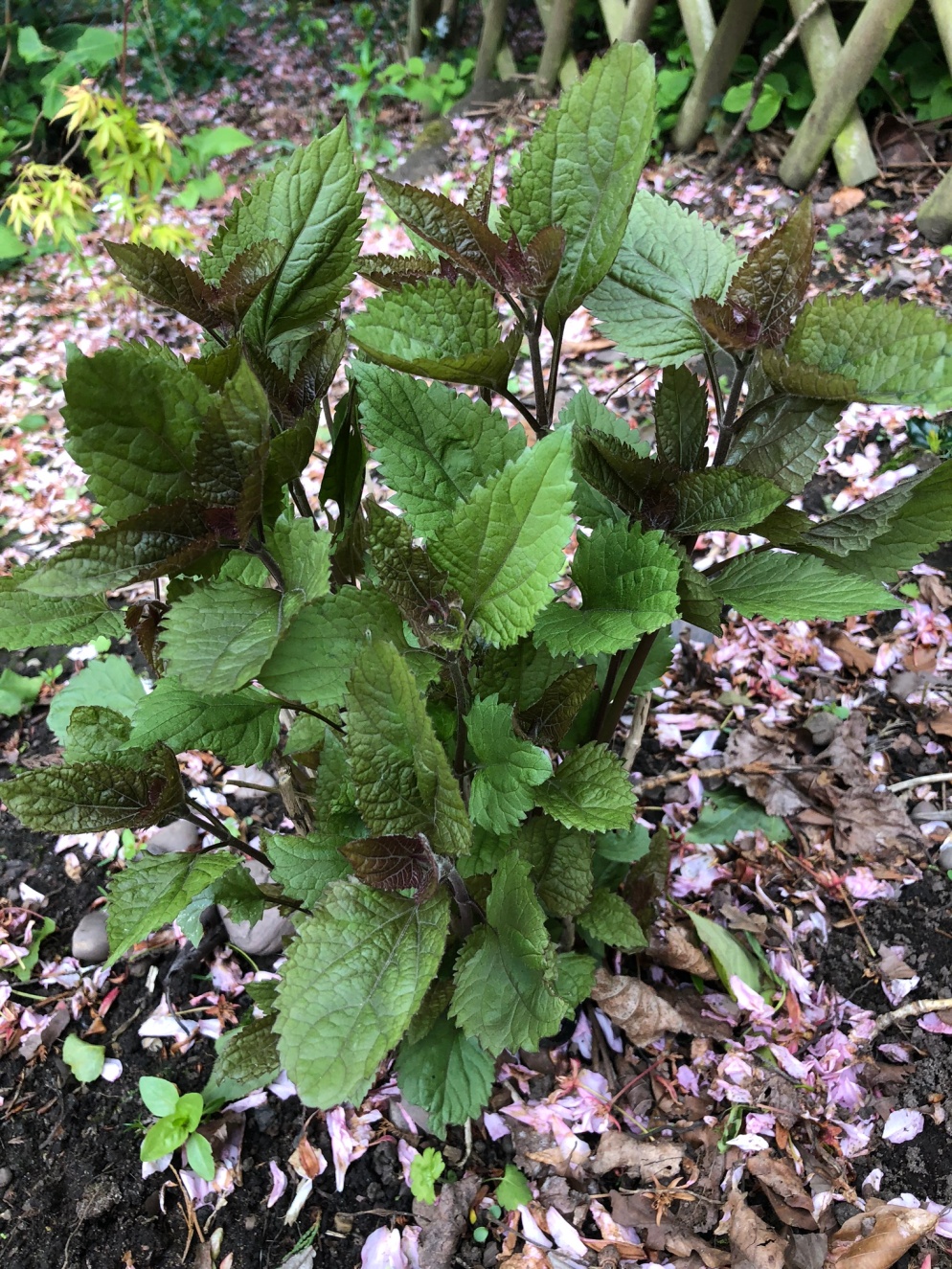 Dicentra Bleeding Heart is showing me how it got its name. It was from the sale table last year because it had already flowered, so this is the first time I’ve seen the flower on my own plant. 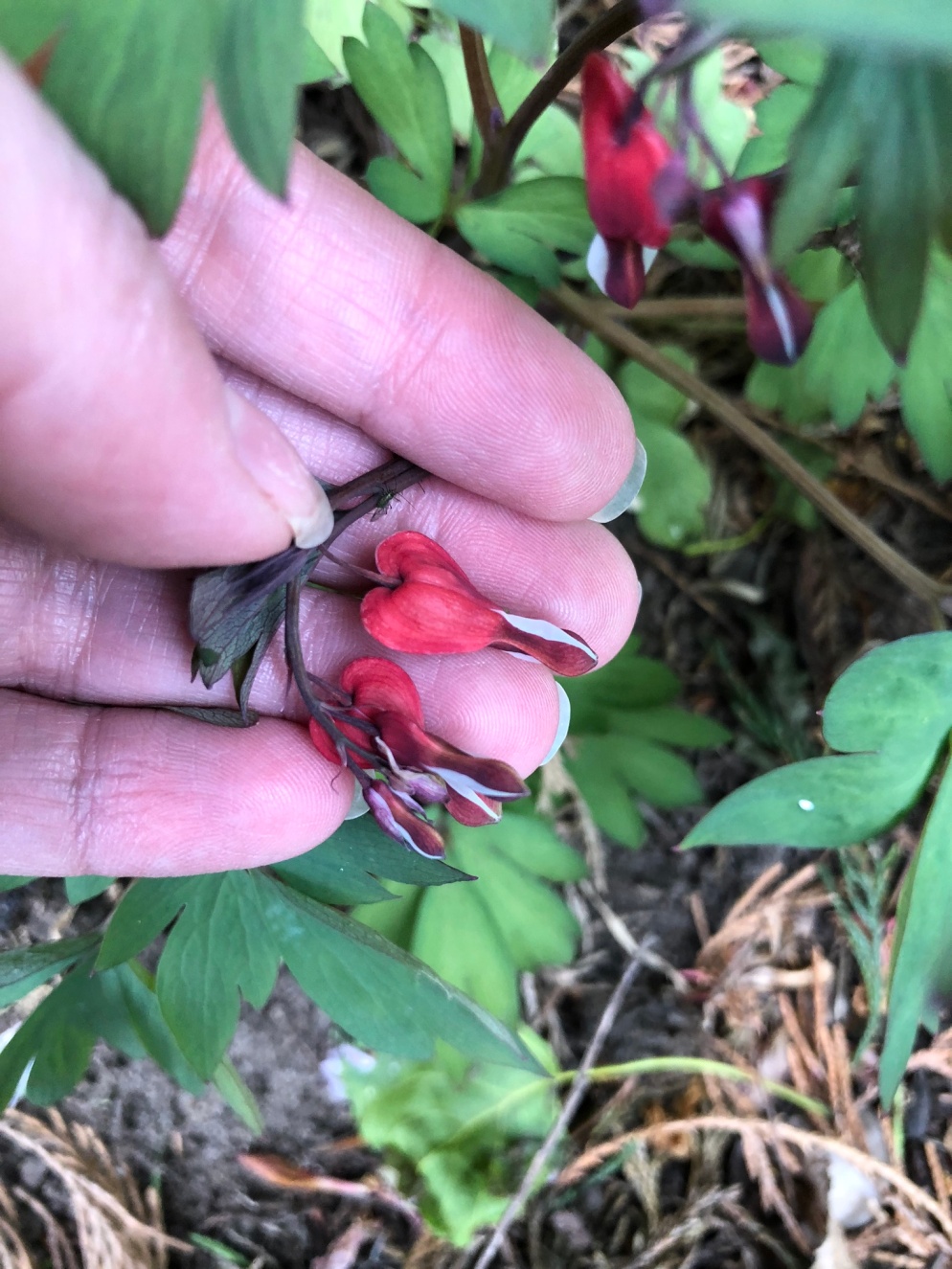 It’s not as impressive as some examples I’ve seen popping up on Instagram recently, but it’s mine and I’m impressed!

My Sunflowers, Sweet Peas, Cosmos and Calendula are all doing well in the greenhouse and I’ve started hardening them off ready for planting out. 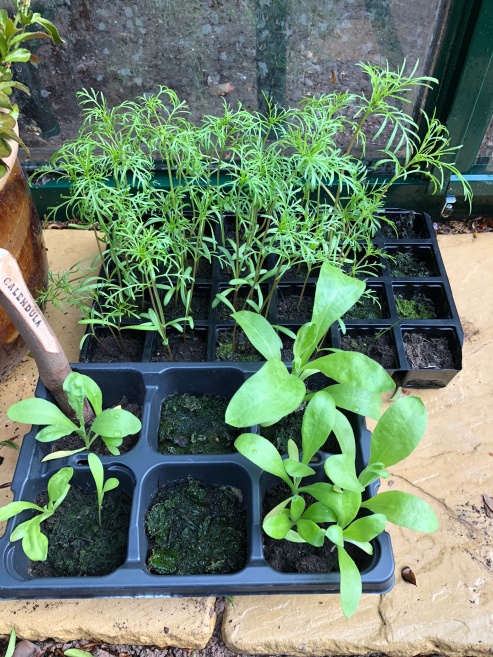 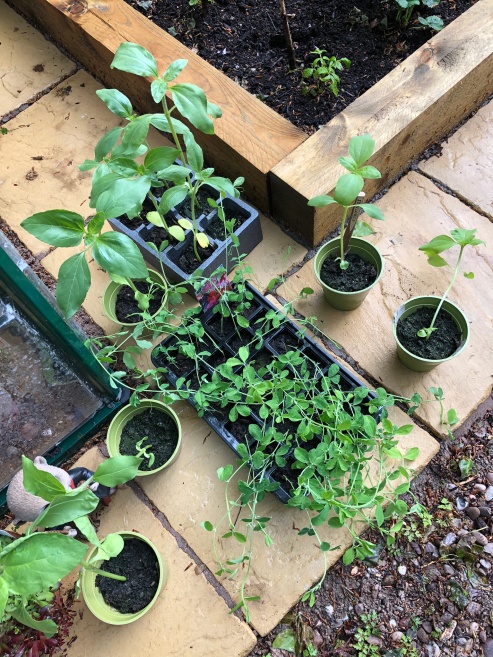 I have to go to Italy for work from Monday to Friday next week, but the weather forecast looks reasonably good at home, so I’m planning to leave them out on Monday morning in a sheltered place and keep my fingers crossed that they’ll be ok and then I’ll plant them out next weekend. I’ll leave instructions with hubby to put them away if the weather forecast changes.

I spent this afternoon preparing the ground where I’m planning to plant them, and building the wigwam supports for the Sweet Peas. 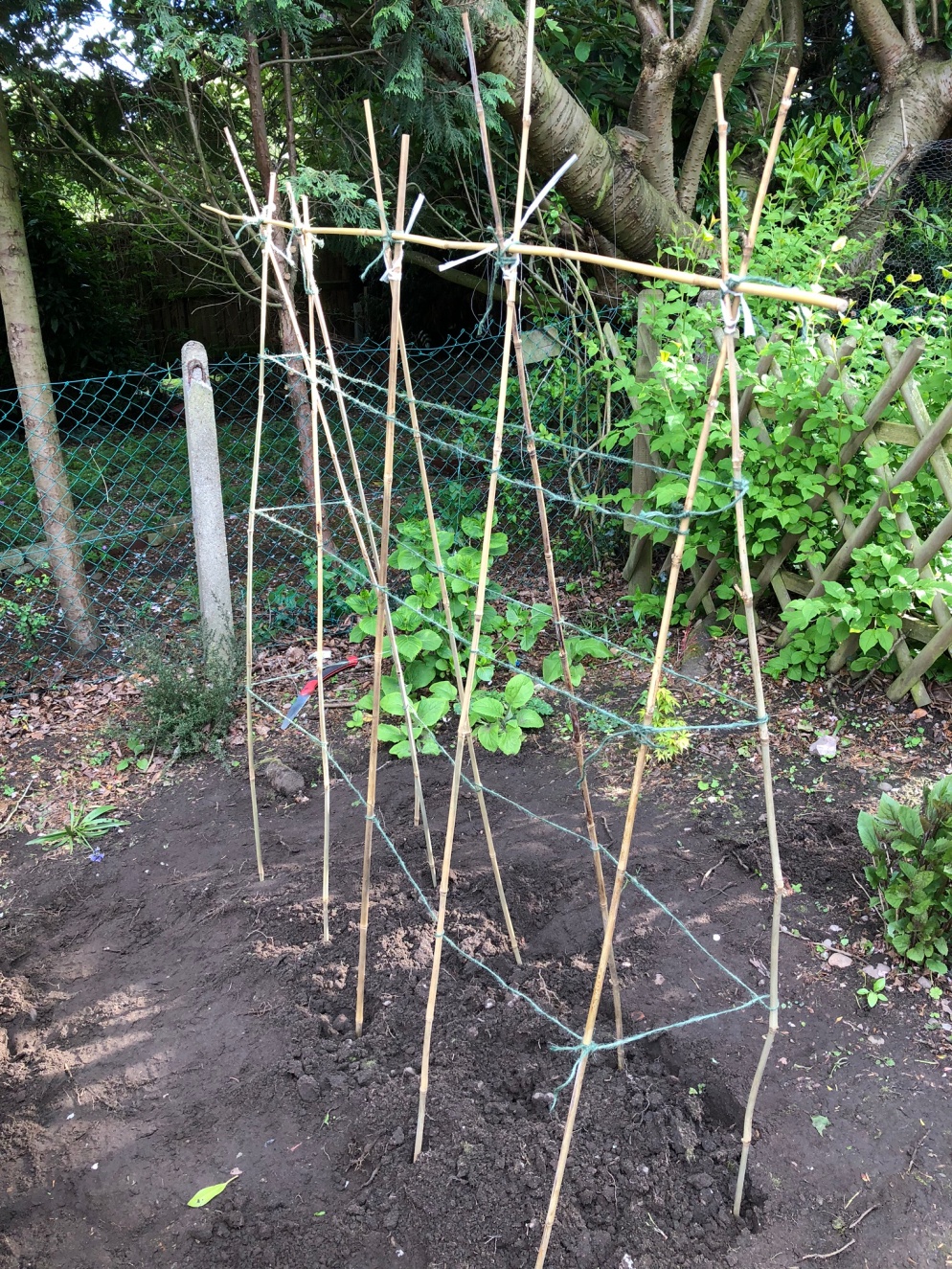 Let’s hope we don’t have a hurricane now!

So, there we have it, my latest six. Things are progressing nicely. I need to do some garden planning I think to work out what my next big project will be. We still have oodles of overgrown space at the end of the garden which I need to do something with.

If you enjoyed my six, do pop over to the Propagator’s page to check out other people’s sixes.