I have a confession to make! I have an addiction. A pretty serious one. A life long one! It’s cost me a fair bit of money and I have several stashes of my addiction around the house. 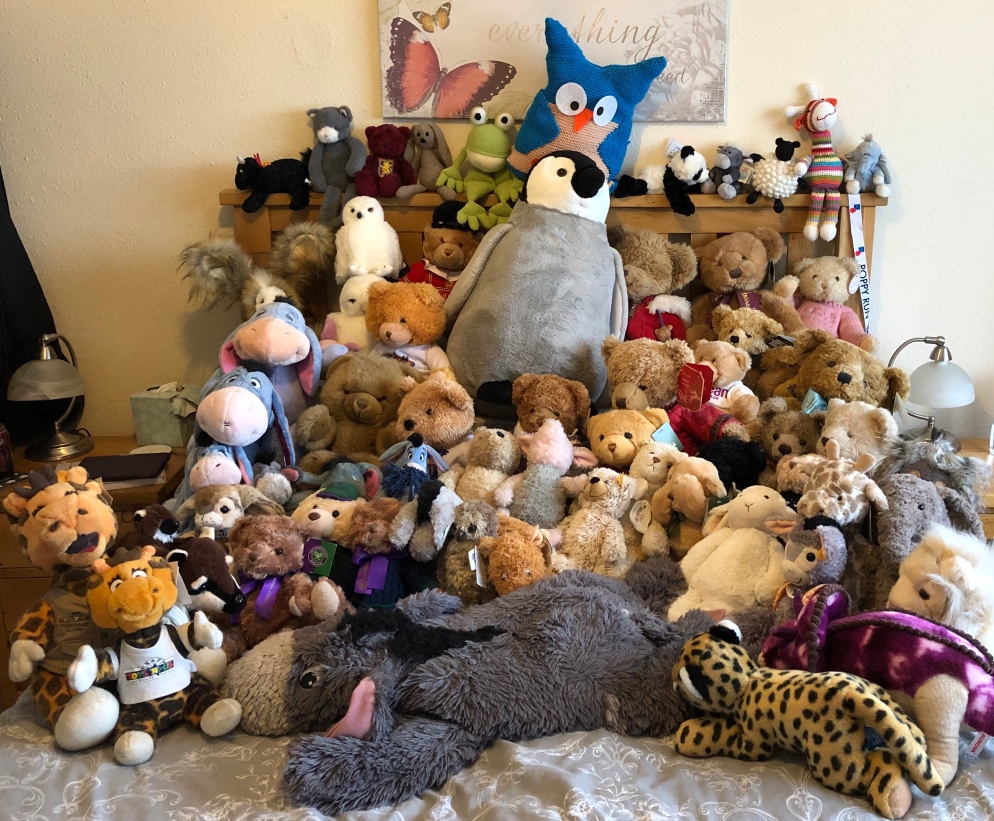 Stuffed toys strictly, I suppose, rather than bears, but to me they’re my bears. A friend of mine challenged me to take a photo of all of them so yesterday I gathered them from all their various homes (and they all have definite homes) and assembled them together on our bed.

Wow! That’s a lot of bears! I have to admit, I didn’t realise I had quite this many. Am I sorry? Absolutely not! They give me lots of pleasure. There are worse addictions to have.

I’ve always loved bears and I think it was inevitable that when I grew up I’d choose to be a cat Mum instead of having babies. I didn’t play with dolls as a little girl. I found them cold and hard and in stark contrast to the soft, fluffy sqidginess of bears. You can’t rest your head on a doll when you’re tired.

My bears aren’t just random though. I can remember where each one was bought, and many of them are reminders of special occasions. Most of them have names. 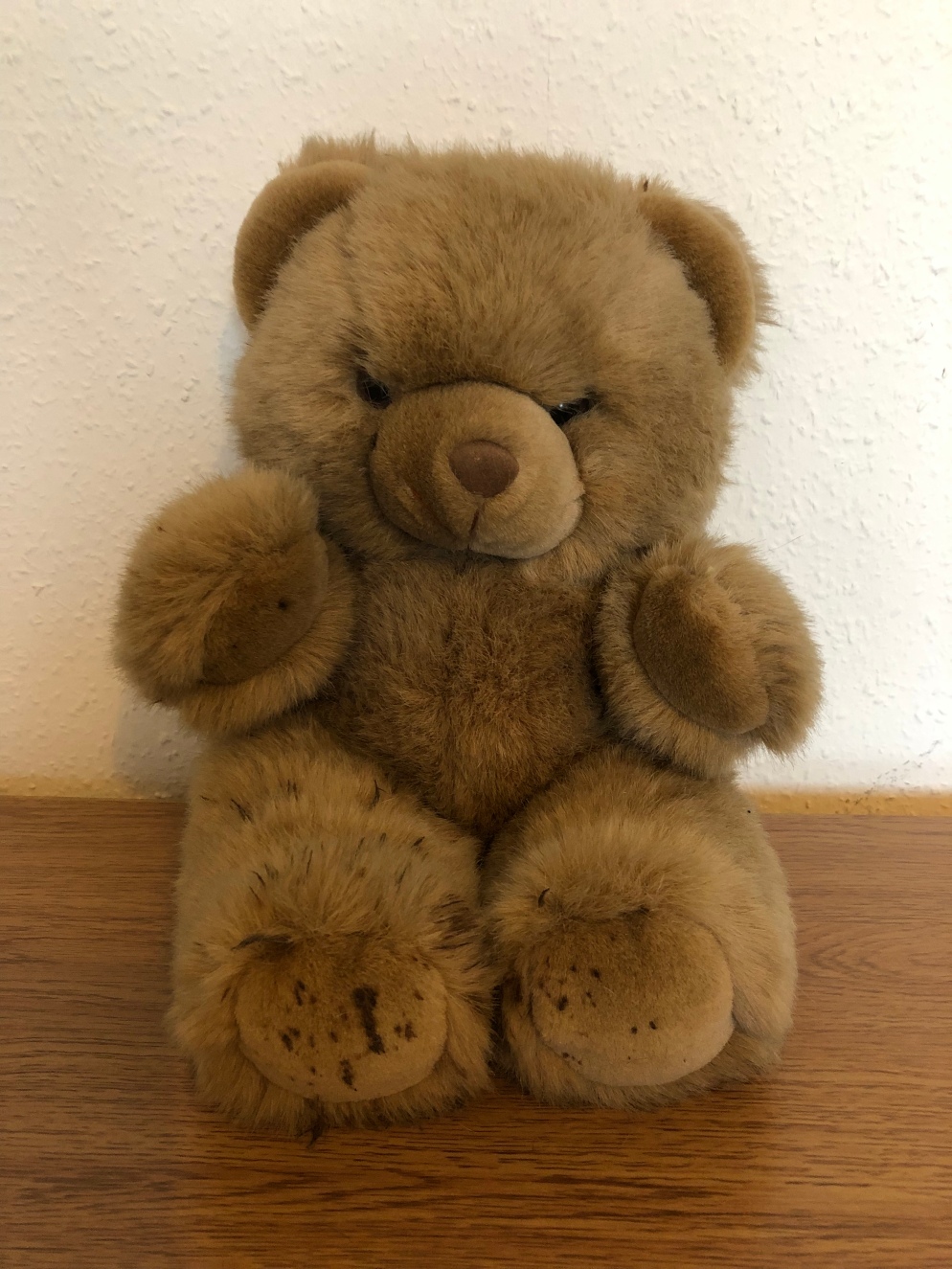 This is the oldest bear that I still have, and she’s called Dilly Trent. When I was twelve I broke my leg and this was a catalyst for my parents to get a second car because they needed to be able to share the school run whilst I was unable to walk. The car was a bright yellow mark one Fiesta registration TDD 358X (weird what you remember!) and its horn sounded like a duck so it inherited the name Dilly the duck. We bought Dilly from Lichfield, and on the same day Mum and Dad bought me this bear so she was named Dilly (after the car) Trent (after Lichfield Trent Valley). 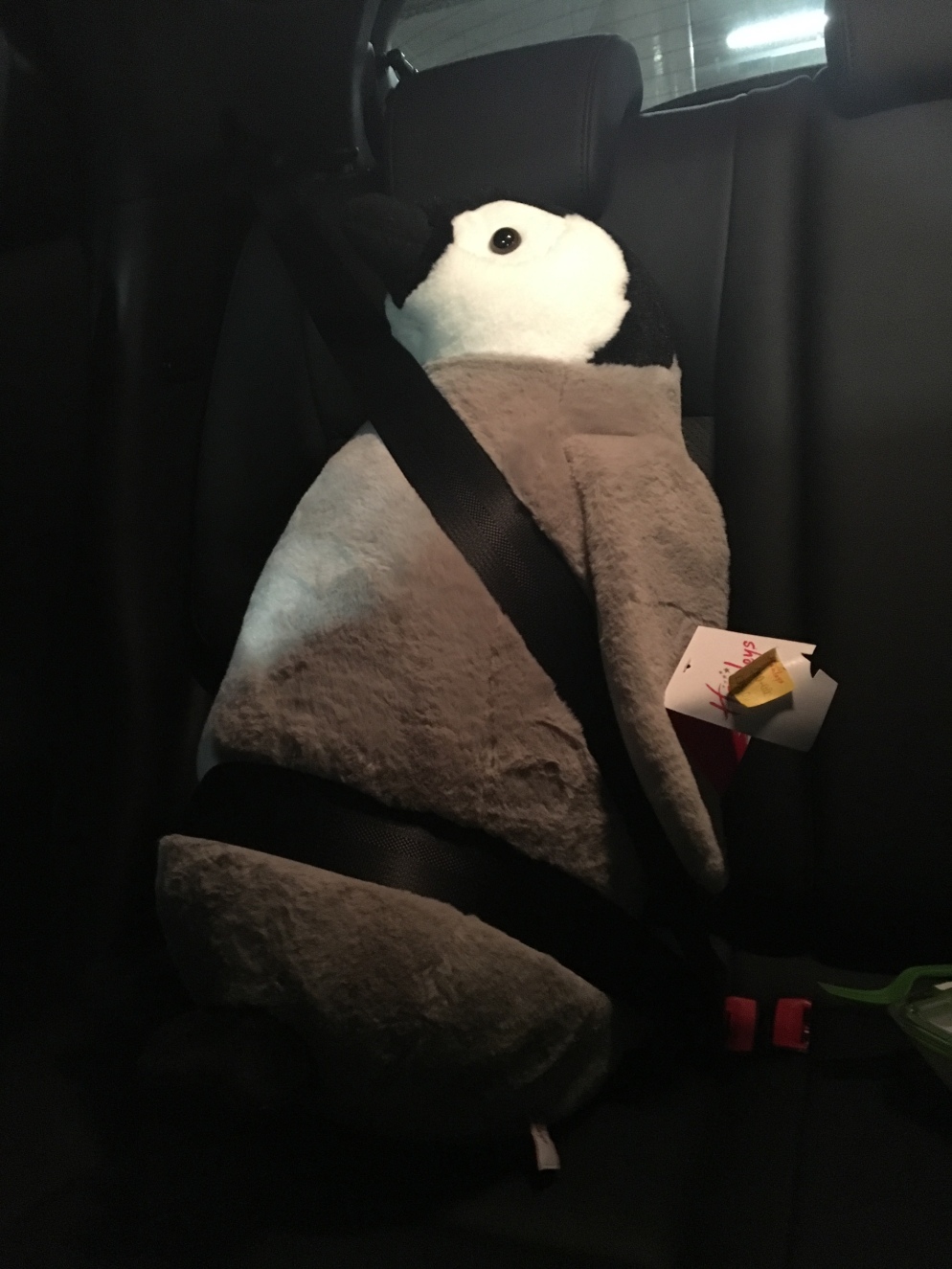 Pendigo was a Christmas present from hubby a couple of years ago. He was from Resorts World at the NEC which overlooks Pendigo lake. He’s so big he needed to use the seatbelt on the way home! 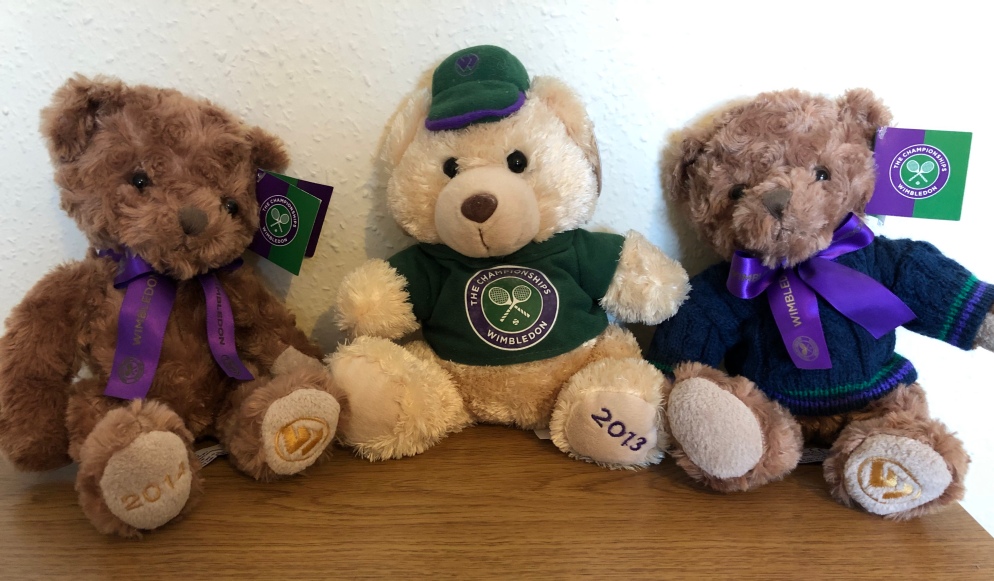 These are my Wimbledon bears bought from the shop at Wimbledon during the championships. Two of my passions rolled up in one (or three as the case may be) bear! Fingers crossed for this year’s ballot so I can get another one! 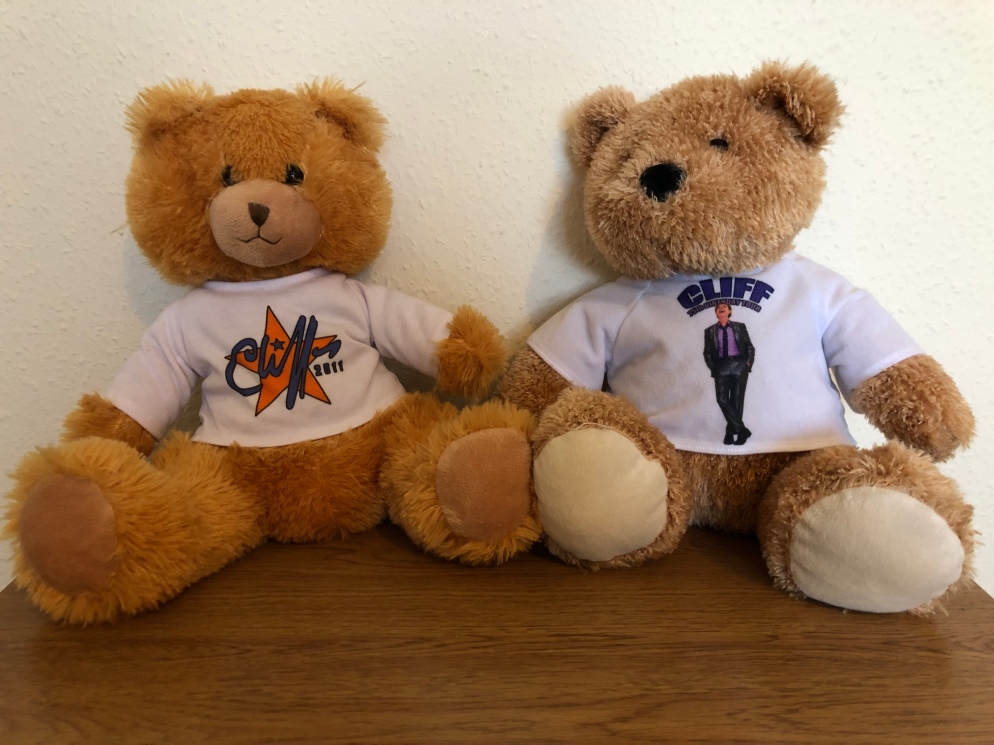 These are my bears from Cliff Richard concerts. Don’t think I’ve mentioned this particular little secret before, but here’s the evidence. 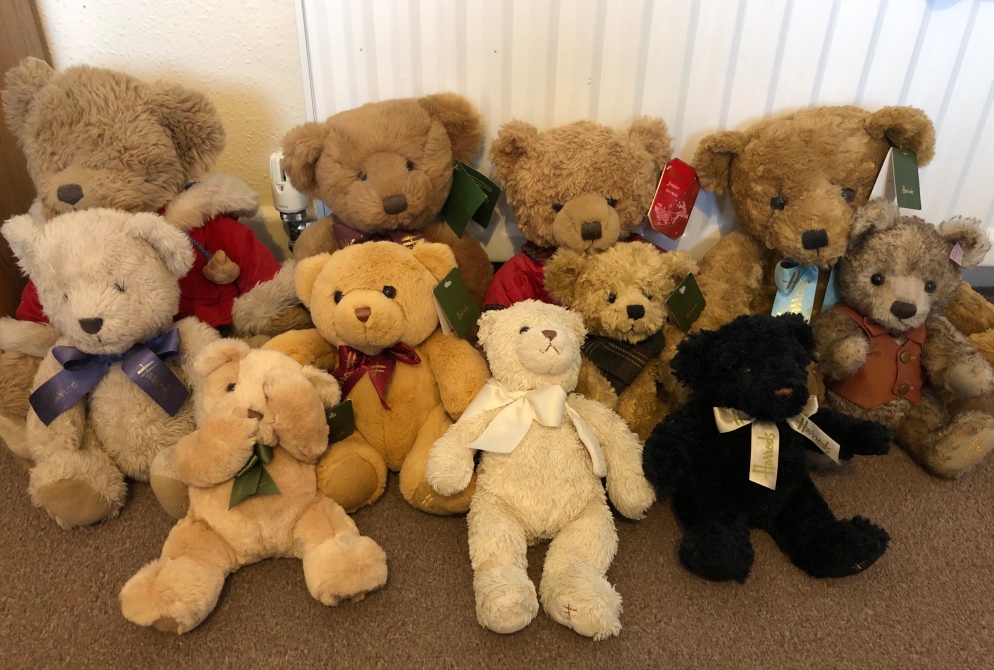 My best friend and I used to go on an annual Christmas pilgrimage to Harrods until Al Fayed sold it and it went downhill! There used to be a MASSIVE teddy bear room and it was my heaven, but the new owners drastically reduced it. This is my Harrods collection. 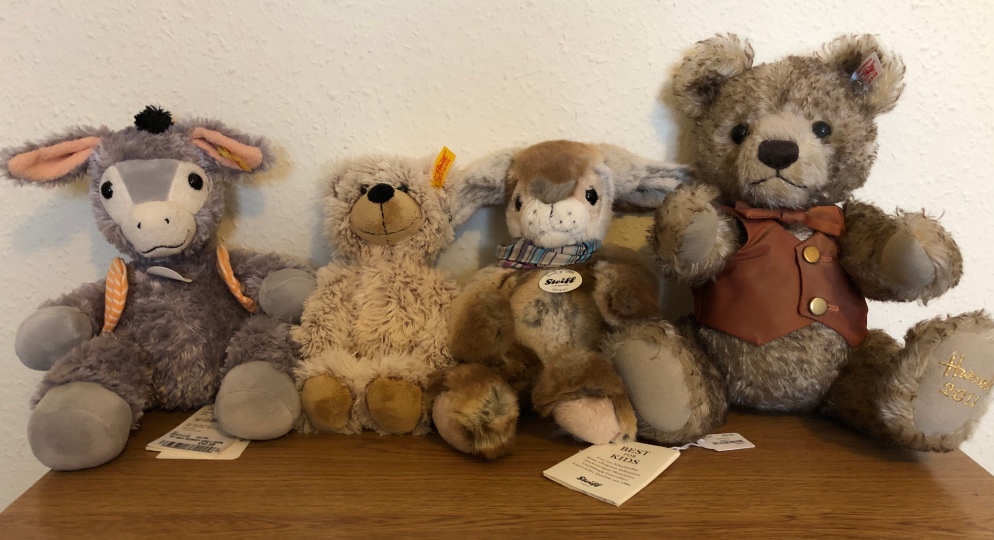 These are my Steiff bears. You could say that these are an investment because Steiff bears are very collectible. You may have spotted that the delight on the end in the waistcoat has appeared in both the last two photos. This is because he’s a Harrods Steiff bear. He was ridiculously expensive but I couldn’t care a jot. He’s beautiful. He used to growl when you tipped him forward but I noticed when I got him down to take the photo that he seems to have lost his voice. Poor thing. The little rabbit next to the Harrods bear is my newest bear. I spotted him in Frankfurt airport on the way home from a work trip and couldn’t resist. He’s called Hoppi and he’s the softest rabbit ever! The little blonde one, Sammy, was my first Steiff bear and I got him with vouchers that my Dad gave me for a very special trip we took to London in 2007. Little Wonky Donkey on the end was also from Harrods, although he’s not a Harrods branded Steiff bear. He’s just adorable. 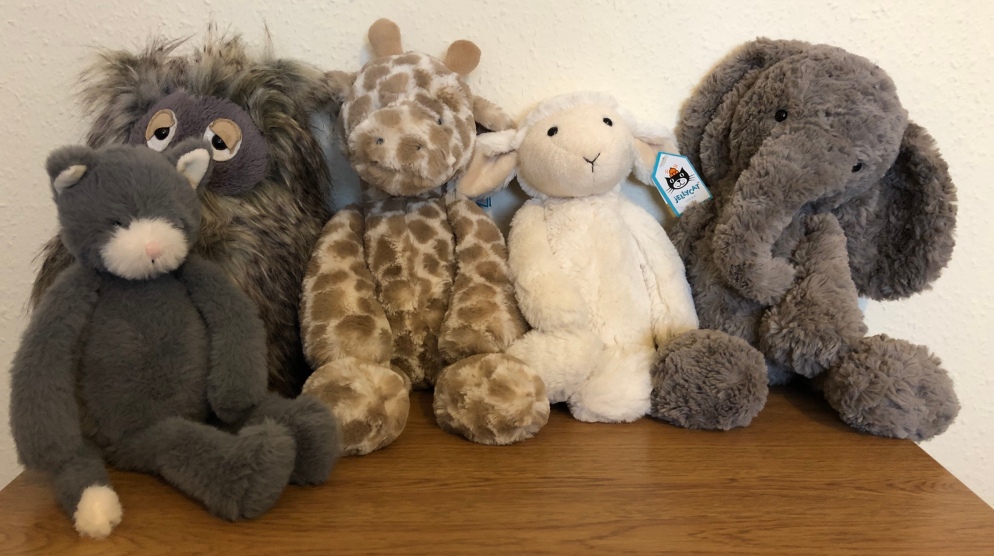 Jellycat! Who can resist a Jellycat bear? Clearly not me! Sweetie kitten at the front was a must because well, she’s a kitten! Grey sitting behind is a bit obscured by Sweetie kitten, but he’s an owl. Hubby bought him for me on a day when I was feeling a bit under the weather. Grayshott the elephant I bought from a village in Hampshire when I was visiting my Mum called Grayshott (hence the name). Dapple the giraffe and Bashful lamb came from a shop near us that I have to do my best to avoid (for obvious reasons!) 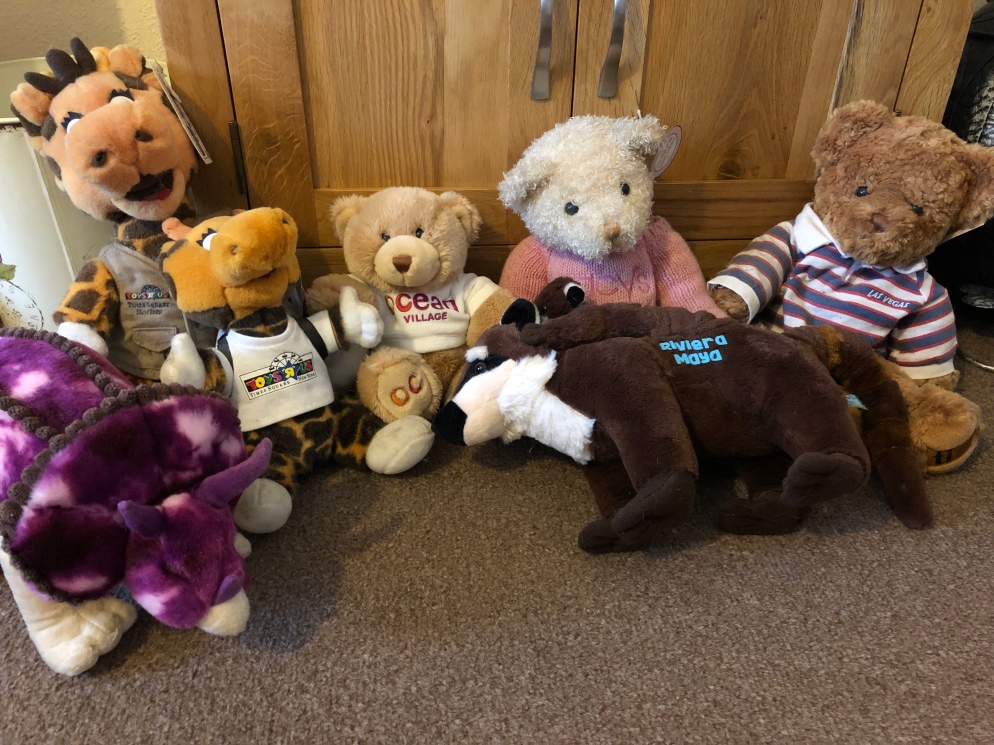 These are all bears that I’ve gathered on my travels. The purple Triceratops was from Orlando airport. I have an affinity with the Triceratops because I used to call them TriSarahtops when I was little after myself! The two Toys R Us Geoffreys are both from Toys R Us on Times Square bought on different trips to the Big Apple. The Ocean Village bear is from our first cruise. He’s called Mr Shel which is made from the initials of all our ports of call on the cruise (Mykonos, Rhodes, Santorini, Heraklion, Ephesus and Limassol). In the pink jumper is Macy who came from Macy’s in New York and in the stripy jumper is Treasure who came from Las Vegas. Finally is my coati and her baby, Conchita and Chica, who hopped in our suitcase when we came back from Mexico. 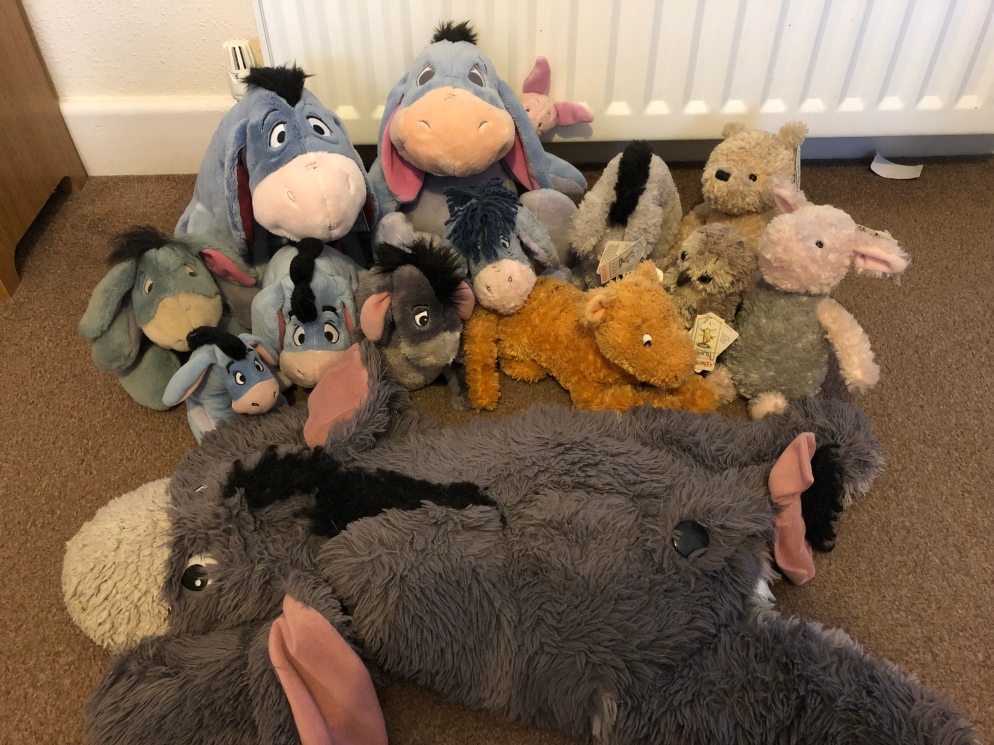 Last but by absolutely no means least are my gloom of Eeyores and his Hundred Acre pals. Gloom, I have decided, is the collective noun for a group of Eeyores. You may argue that nine Eeyores is enough for one house. We’ll see! There are Eeyores here from New York, Orlando and London – he gets around! The group of Pooh, Piglet, Tigger, Owl and the nearest Eeyore to Pooh Bear were also bought with the Harrods vouchers on that special London trip.

So, there you have it. Lots of bears, all very much loved and here to stay!

4 thoughts on “A Teddy Bears’ Picnic”