I popped out in the garden one night this week to inspect Spring progress and said to myself, yup, definitely got to do a Six on Saturday this week. I was away last weekend so it was a couple of weeks since I’d properly seen the garden in daylight and so much had changed.

So, here we go with numero uno – Spring bulbs. Here’s my barrel planter two weeks ago.

Reasonably well defined – Heather in the middle surrounded by Cyclamen with the Giant Alliums coming though at the back, Tulips (I think) on the left and an at-that-point unidentified smaller bulb nearer the middle.

Here’s two week’s progress for you.

I think I made a school boy error with the Giant Alliums! They’re taking over the world! It’s like Little Shop of Horrors! I’ll see how they fare this year, and then I may have to relocate them to somewhere with more space for next year. I didn’t appreciate quite how giant Giant Alliums would be! The size of the bulb should’ve been my first clue really – mahoosive! I now know that the previously unidentified leaves are a Snowdrop, but I’m sure I planted more than one bulb. Maybe they were either dug up by squirrels or have no room to bloom due to the giantness behind! I think the suspected Tulips are struggling for space too! Oh well, you live and learn.

Sticking to the theme of bulbs for number two, the Bluebells are continuing to pop up all over the garden. I’m sure there are significantly more than there were last year.

You can see them pushing through all around the edge of the bistro, and even through the weed control fabric around my Festuca pot and in the middle of the gravelled area. We have them in pretty much every bed, and I noticed today that there are hundreds of them in what I lovingly refer to as ‘the wasteland’ at the top of the garden. That’ll be really pretty when they flower.

Number three is my Bergenia, or Elephant’s ears.

This was given to me by the cleaner at work from her garden. It was just in a plastic bag with no soil, and I planted it a couple of days afterwards, not really expecting much, but it’s thrived and has lovely pink flowers waving at me. Spot the Bluebells vying for its spot!

On to number four.

Beautiful pink Camellia in the front garden. We inherited the Camellia when we moved in and I don’t do anything with it, it just keeps going and stuns us with its gorgeousness every Spring. Doesn’t it look luscious with the raindrops nestling in its petals?

Number five is something special, not that bulbs, Bergenia and Camellias aren’t, but this is a project that’s been a long time in the imagination. Regular readers will know about my raised beds that I built last summer and my greenhouse that I got for Christmas. Here’s how they’ve looked since the new year.

On Wednesday we took delivery of thirty slabs, three bags of sharp sand and one bag of cement.

Very conveniently (for me) I was in Frankfurt on business when they arrived so hubby humped them all the way down the garden to the greenhouse. Must remember to be away whenever heavy goods are being delivered!

Today my Dad came over to help me lay the slabs. We were a bit will we won’t we to start off with because he lives fifty miles away and we couldn’t decide whether the weather was going to play ball and cause him a wasted trip (other than seeing yours truly obvious!) Eventually the blue skies won through and we were able to lay half the slabs and I’m so pleased with how they’ve turned out so far – much better than the picture in my head. 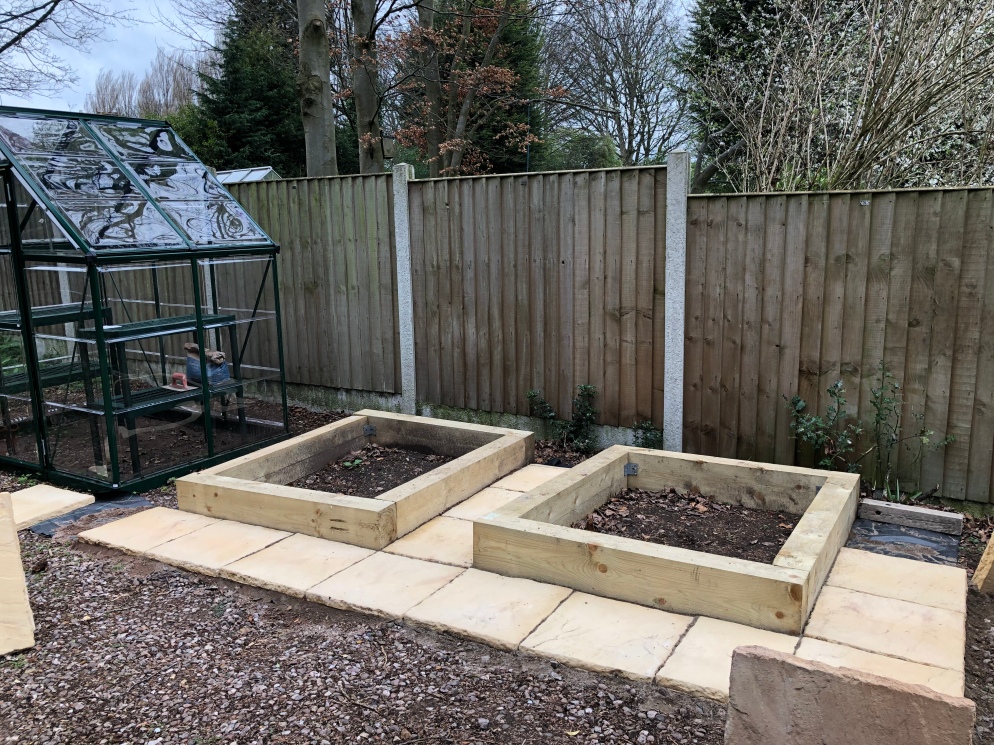 We ran out of sand and cement at this point, hence we stopped. I’m not sure when I’ll be able to finish it off because the forecast is for wet weather for the foreseeable future. Soon there will be strawberries, raspberries, carrots, potatoes, leeks and courgettes growing in those beds. How exciting!

I foresee more slab laying in my future because we have a LOT of space and don’t they look good? People are always trying to get rid of slabs on freecycle too so it can be a cheap, rewarding and fruitful project.

I also now have this hanging around the garden so I’ll be off to peruse Pinterest later to see what I can make with it.

I will finish and leave you with something for number six that made me very VERY happy this week when I spotted it. Sometime back towards the end of summer I wrote about my beautiful Berberis that lost all its leaves as soon as I planted it out. It really was beautiful when I bought it from Hop Pocket out near Worcester.

See its beautiful leaves that look like they’ve been gilded with gold? It is deciduous, so it may have been just coincidence that I happened to plant it out when it was time to lose its leaves, but they went so quickly that it just didn’t seem right, so I dug it up and put it back in its pot and whispered sweet nothings to it whenever I popped out over the Winter and look what’s happened.

It’s alive, it’s alive! I have some garden centre vouchers so I’m going to treat it to a nice pot and nurture it and love it on its own just in case it doesn’t like our soil.

So there’s my six for this week. Do pop over to the Propagator’s blog to check out his and others’ sixes.

Enjoy the rest of your weekend!