I spent two and a half days north of the border this week, combining a work trip with pleasure, with the balance happily tipped towards pleasure. This was my first ever trip to Scotland and I’m pretty sure it won’t be my last. I had such a good time and I squeezed so much sightseeing into my short time there that I may have to split this post into two entries, but I’ll see how I go.

I flew up from Birmingham on Sunday afternoon and arrived in Edinburgh to blue skies an hour and a bit later. I got the blue Airlink 100 bus from the airport to the city centre which was really quick and easy. Half an hour on the bus with announcements of what the next stop was (and a lady signing what I assume was the same information on a screen) so I knew exactly where I was. I got off at Waverley Station but I later found out that the previous stop was right at the end of the road that my hotel was on. Not to worry – it meant I got oriented straight away and I needed to know where Waverley was for the next morning anyway.

My hotel, Frederick House Hotel, was super cheap (thirty quid a night) and I can’t for the life of me work out why! My room was very comfortable. I had a squishy double bed, a dressing/work table, a decent TV, plenty of hanging space and a nice clean bathroom with a power shower. 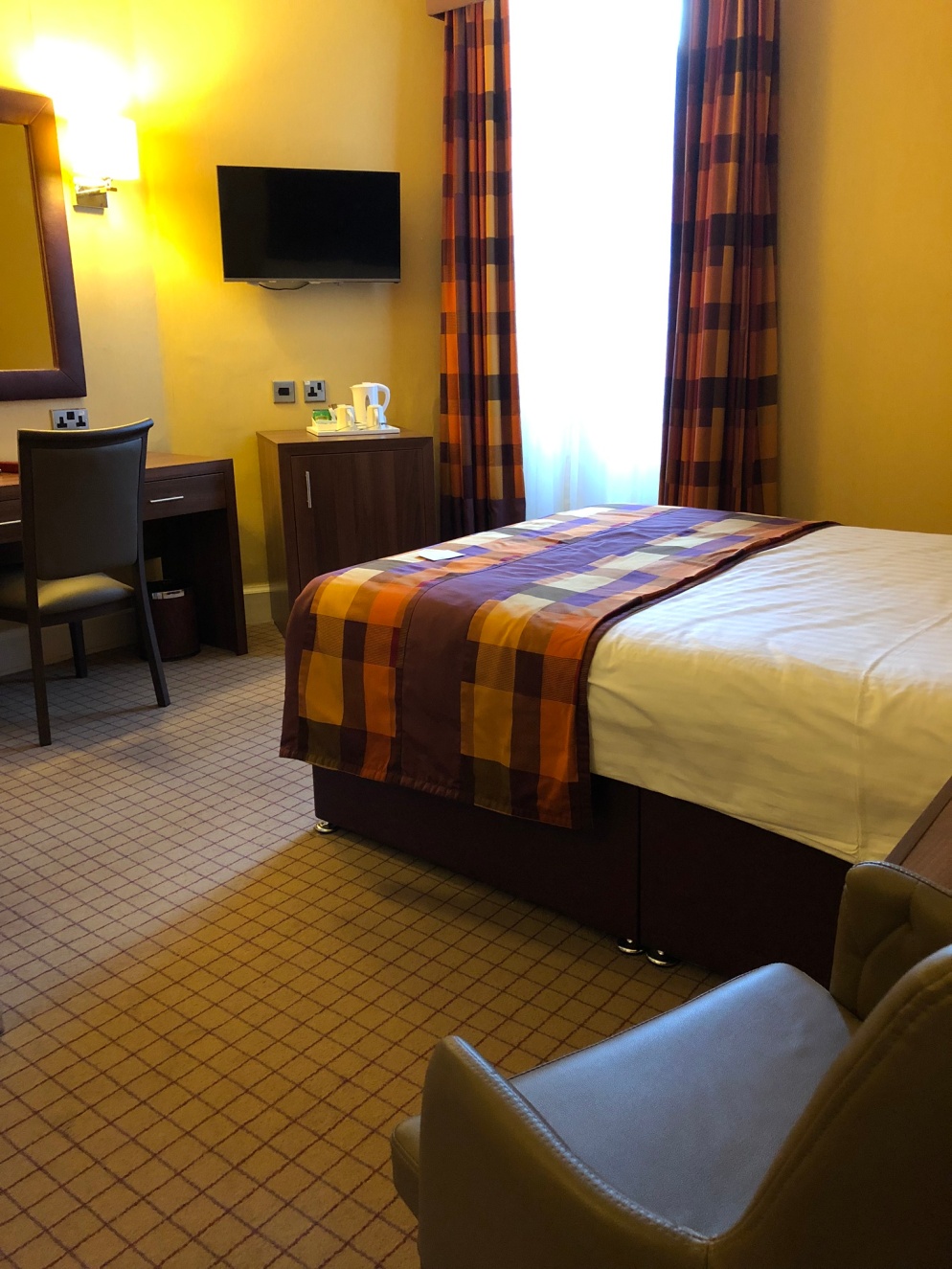 I even had tea and coffee – I don’t drink either, but the four cartons of milk came in handy when I had indigestion and hadn’t got any tablets! 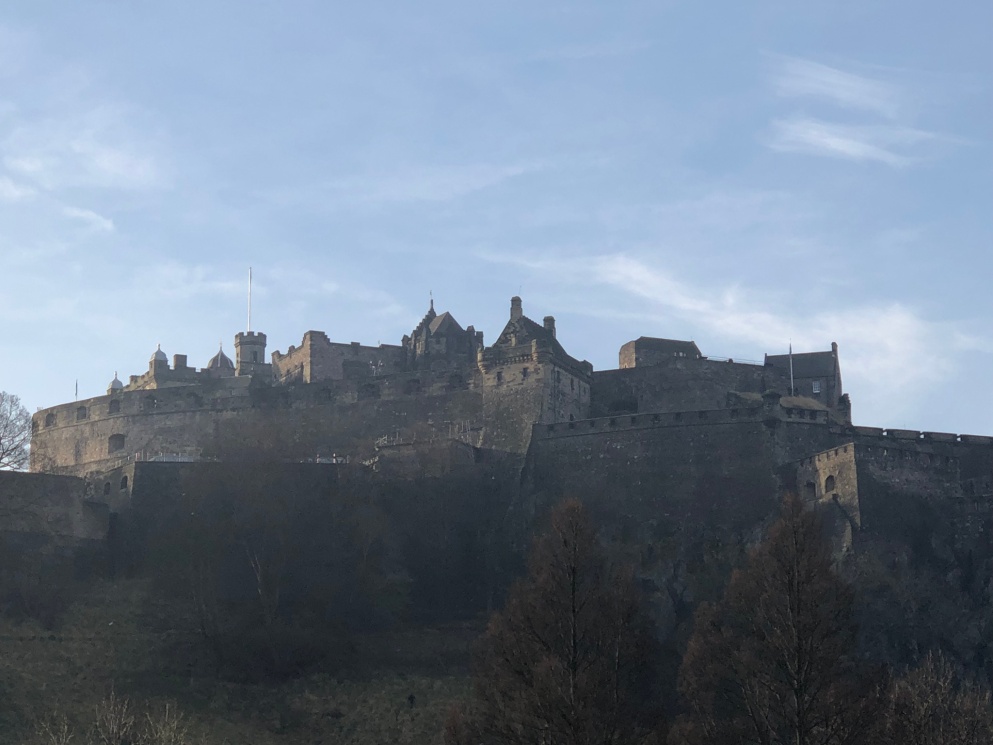 … and I was ten minutes walk from the station so I couldn’t really have been more perfectly located. There was no restaurant at the hotel, not even for breakfast, but there are loads of restaurants and cafes moments away. I took Belvita Breakfast Biscuits with me so I didn’t have to waste precious sightseeing time eating in the morning!

On the day I arrived I had a walking tour booked for six thirty in the evening which lasted for two hours, so I headed out about fiveish so I could eat beforehand. I’d found a Chinese restaurant with great reviews on tripadvisor called Karen’s Unicorn so I decided to try it. I went for crispy shredded chicken with boiled rice, and I wasn’t disappointed (although it was probably what gave me indigestion!) 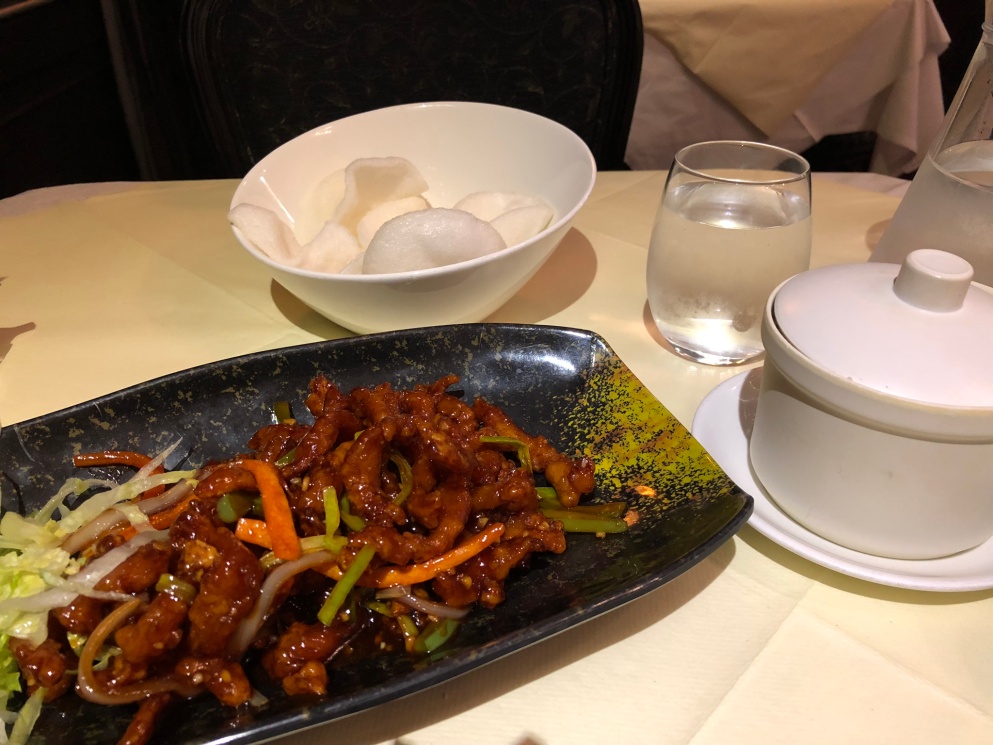 I wandered over to the Royal Mile (thank you google maps) after I’d eaten to meet the tour. 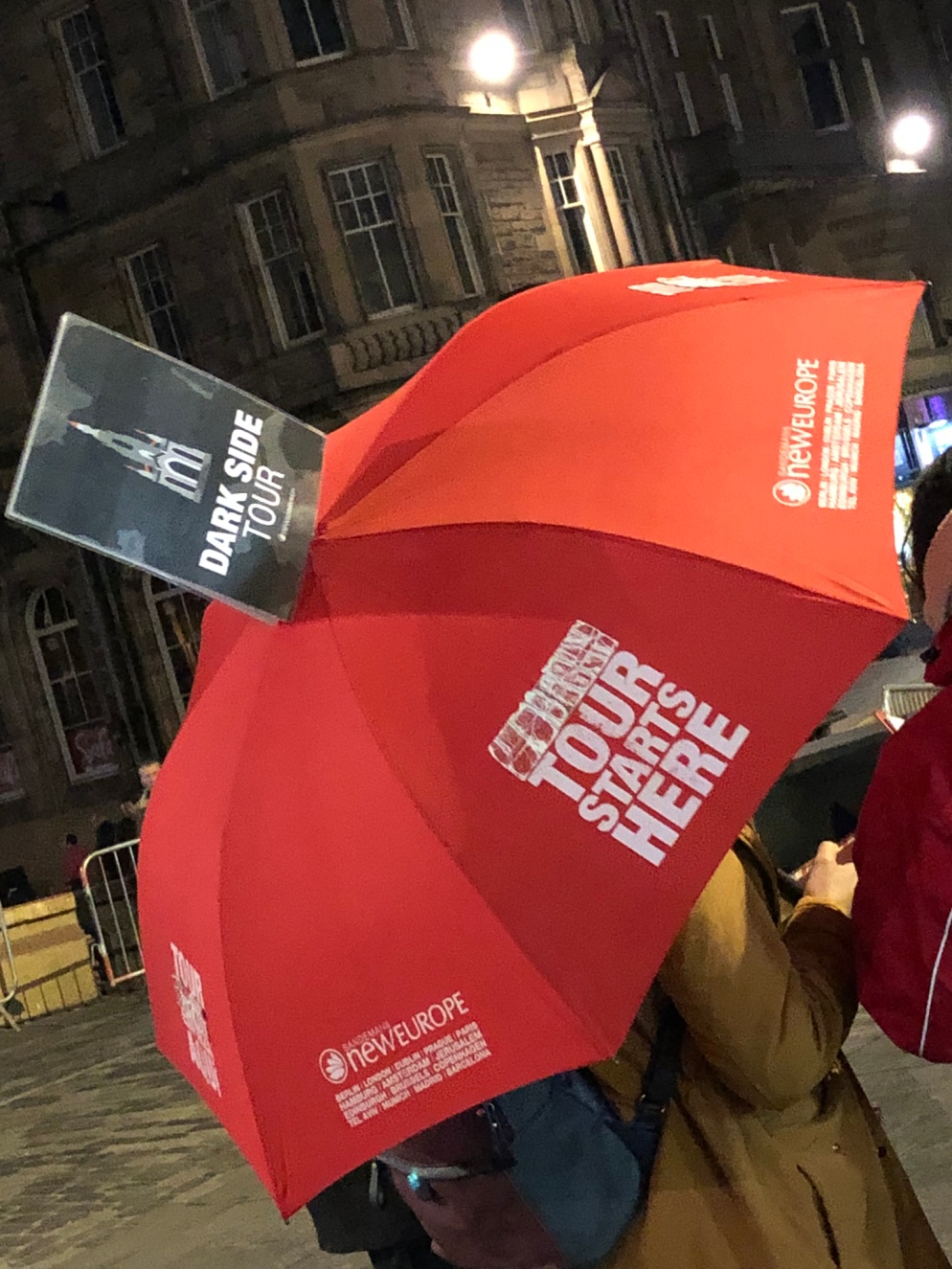 I was met by Melanie from Canada who was the tour guide and we were soon on our way. I don’t have many photos, and the ones I do have are a bit rubbish because it was dark and iPhone cameras aren’t great in the dark, so I’ve consulted google for some illustration.

I already can’t remember what route we took, so this is most probably not in the order in which it happened!

We went up Calton Hill and Melanie told us about some of the structures up there. There’s the part built Parthenon replica called the National Monument that was intended to commemorate Scottish soldiers killed in the Napoleonic wars, but that they ran out of money for and is nicknamed Scotland’s disgrace.

Told you the iPhone’s no good in the dark!

Right next door is the Nelson Monument. This has a time ball at the top which was supposed to act as a time piece so ships in nearby Leith Port on the Firth of Forth could accurately set time so they didn’t get lost at sea, but unfortunately given how prone the Firth of Forth is to significant levels of fog, this proved ineffectual and led to the start of the one o’clock gun at Edinburgh Castle which still operates to this day. 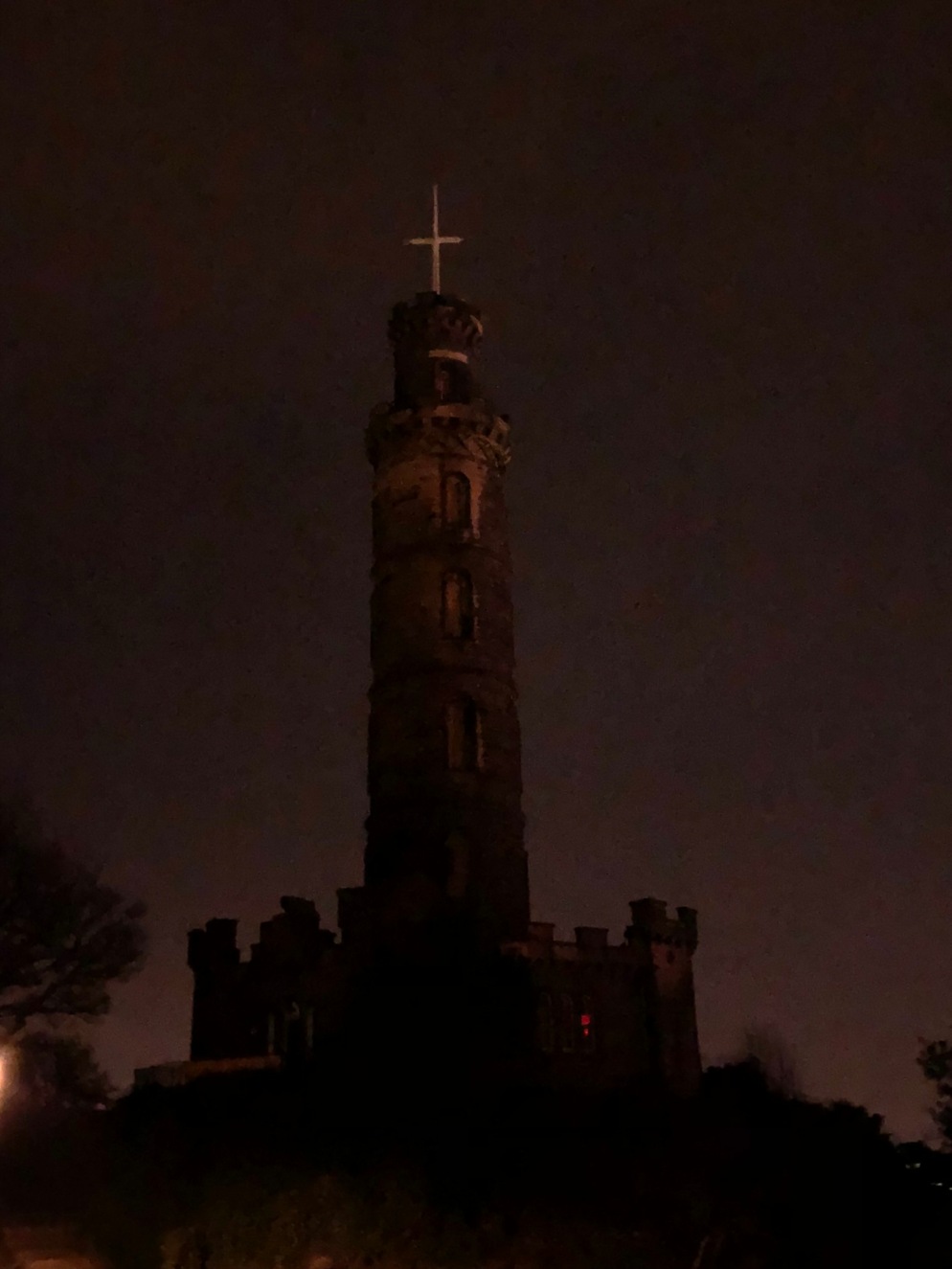 While we were up the hill, in the dark, Melanie told about the faeries of Scottish folklore.

There are the Brownies who clean and tidy your house in the night, but who you mustn’t take for granted otherwise they’ll burn your house to the ground. Moral of the story – appreciate kindest shown to you. 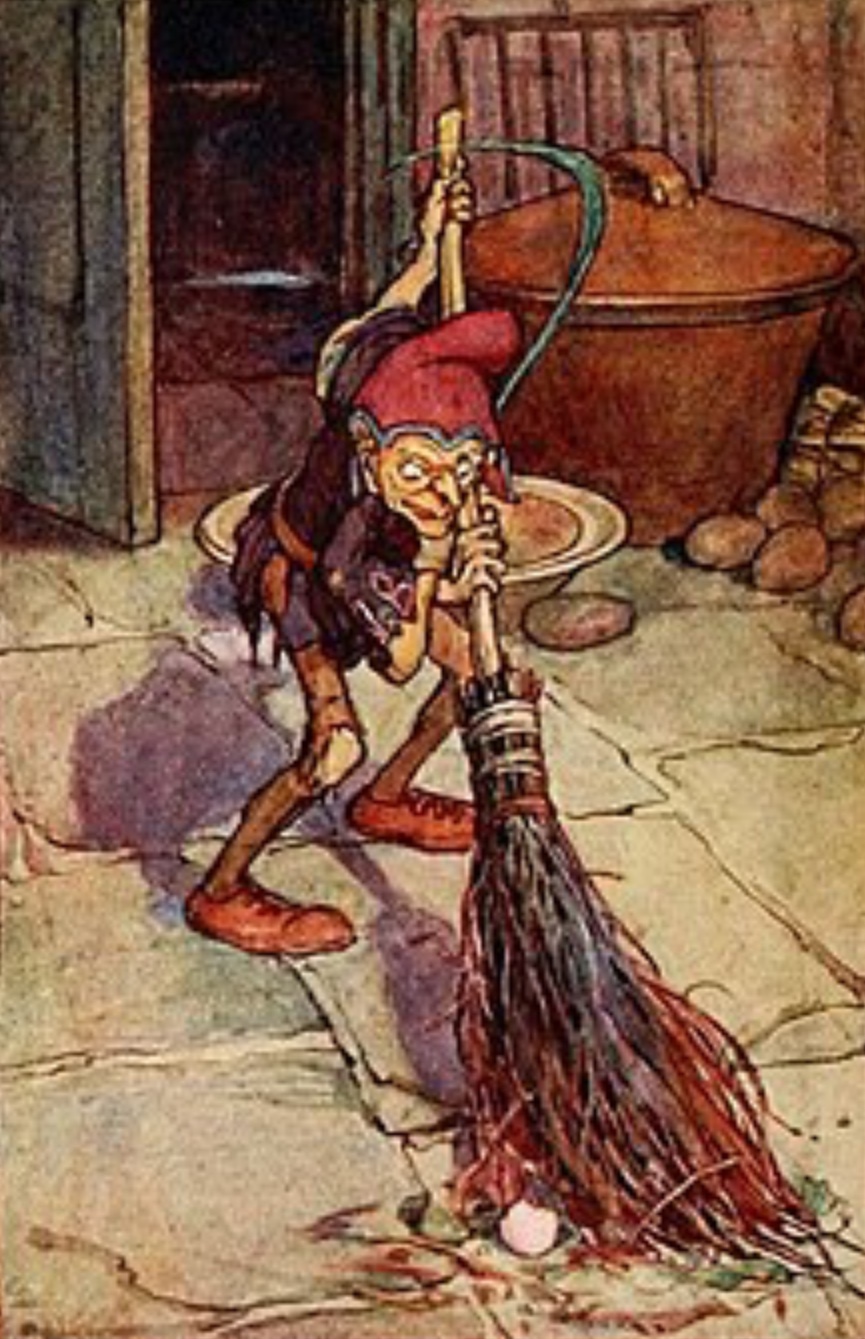 Then there are the Selkies who are seals who can shed their skins and shapeshift into human form. The tale is that a Selkie fell in love with a human man and married him, but the draw of the sea was too much and she was compelled to put on her seal skin every so often. When her husband found out that she was a Selkie he couldn’t accept that she hadn’t trusted him enough to tell him and she was heartbroken. Moral of the story – don’t pretend to be something that you’re not.

The scary one is Redcap. In the story Melanie told Redcap is totally naked apart from his cap and his modesty is kept only by a long white beard. Google seems to prefer a clothed version! Redcap lures people off their path into the wilderness when they see flashes of his red cap in the distance. He then brutally murders them and soaks his cap in their blood. Moral of this story – fairly obviously, beware of strangers (particularly naked ones with blood dripping from their cap!) 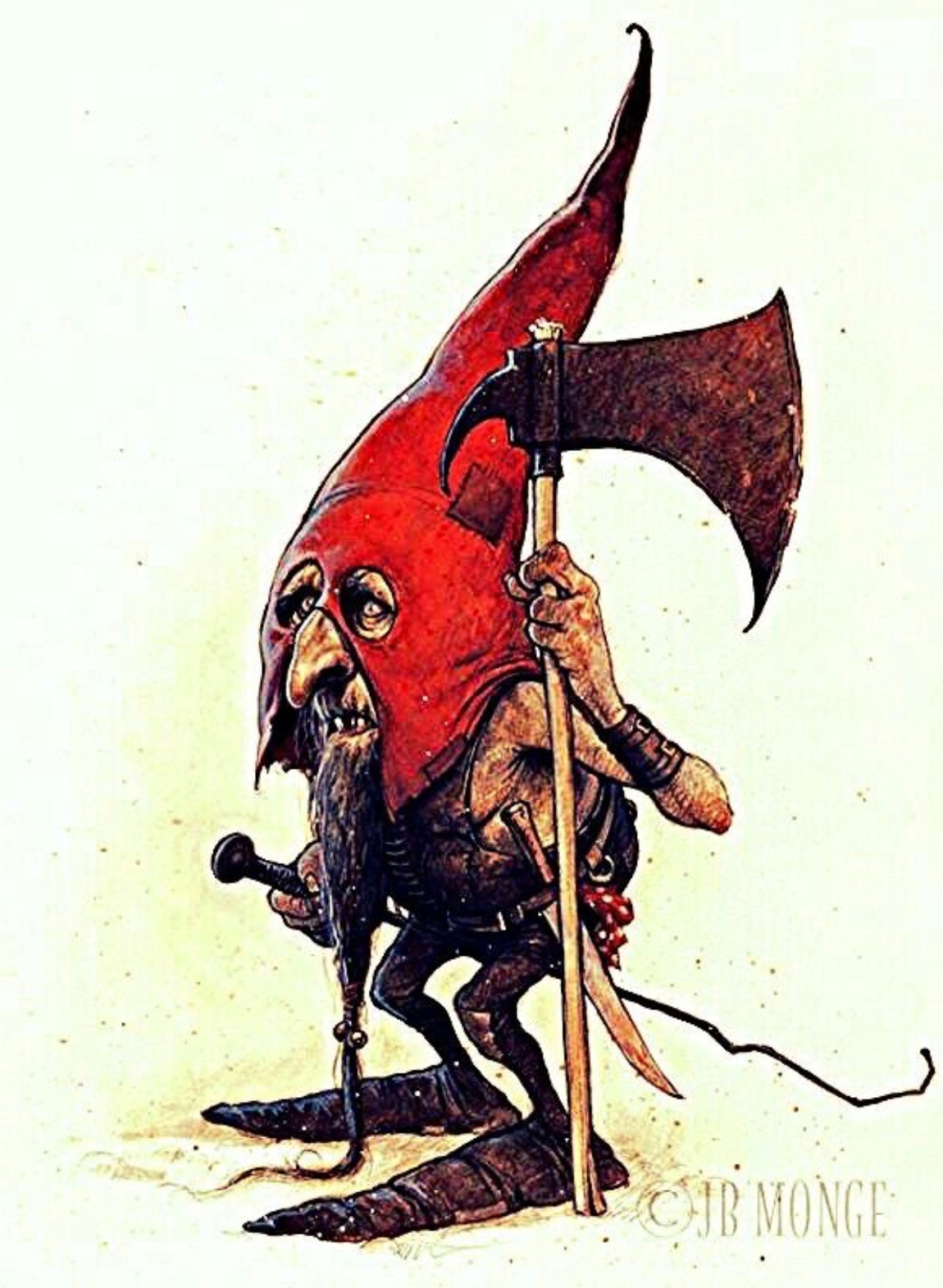 Finally there are the Kelpies. Kelpies are beautiful horse spirits which live in water. The legend is that people, particularly children, are drawn to them and will go to stroke them and entwine their fingers in their silky manes, but then the manes would turn into tendrils that grab the children’s arms and drag them under water to their death. Moral of the story – beware of wild animals. 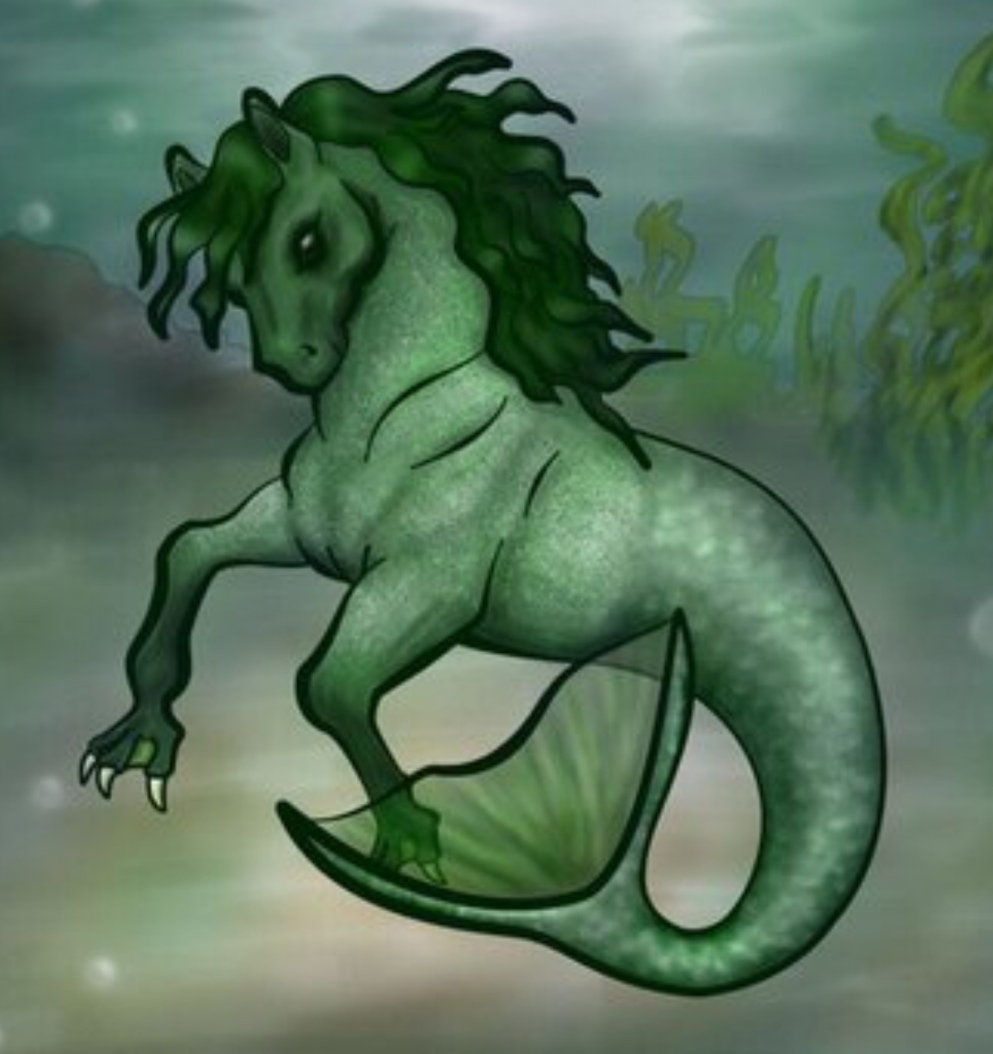 We went in two graveyards where we were told tales of people being buried alive. Medical knowledge wasn’t what it is now so people who were unconscious or had suffered a stroke could be mistakenly thought dead and buried! On one exhumation more than thirty coffins were found to have scratch marks on the inside. This led to a piece of string attached to a bell being tied to ‘corpses’ fingers or toes so that could ring a bell if they woke to find themselves six feet under. This became known as being saved by the bell. The person employed to listen for such bell ringing was known as working the graveyard shift. 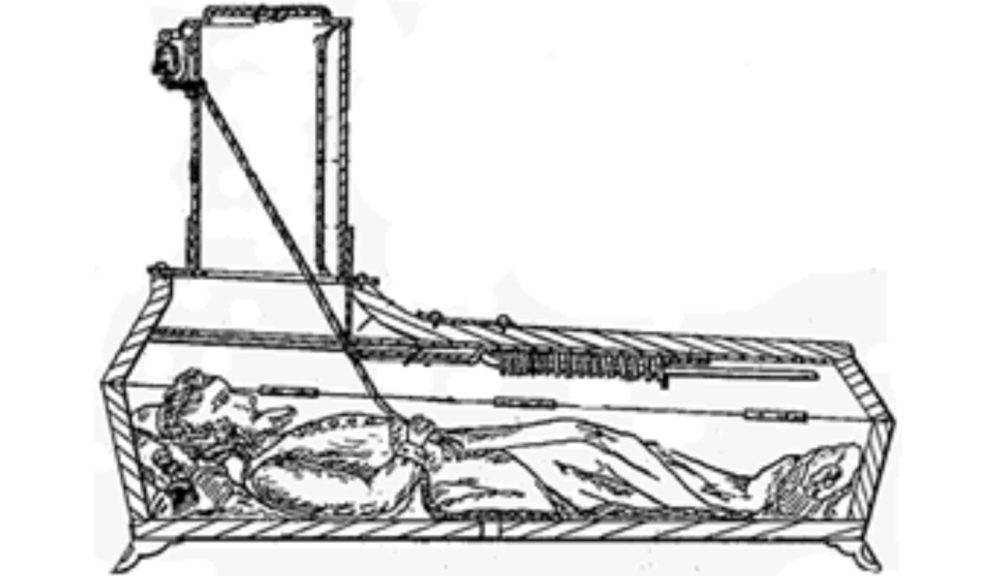 We were also regaled with tales of grave robbers. This was common centuries ago because corpses could command a hefty sum from the medical community who turned a blind eye to where they came from. One pair of grave robbers dug up a recently buried lady only to discover her fingers adorned with ruby and emerald encrusted rings. They tried to get the rings off but her fingers had swelled so they decided to saw her fingers off. As they did so the body let out an almighty scream! She wasn’t dead, she’d had a stroke which rendered her temporarily paralysed and the act of sawing off her fingers had shocked her body into waking up! They were arrested and she lived for another ten years minus a couple of fingers.

I’m not sure whether I’m one hundred per cent sold on the accuracy of these tales, but it made for creepy listening in the middle of a dark cemetery!

What follows is accurate though. The more intact a corpse, the higher a price it could command, so two entrepreneurial Irishmen, William Hare and William Burke, decided in 1828, rather than go grave robbing, it would be much less effort to simply find people who wouldn’t be missed – loners, prostitutes, the deranged – and kill them by smothering so as to avoid visually damaging them. Essentially they became professional serial killers! Their terror came to an end when a lodger discovered a body hidden under a bed and called the police, but not before they’d profited from seventeen murders! Hare admitted the crimes and gave evidence against his accomplice in return for his freedom, known as turning the King’s evidence. 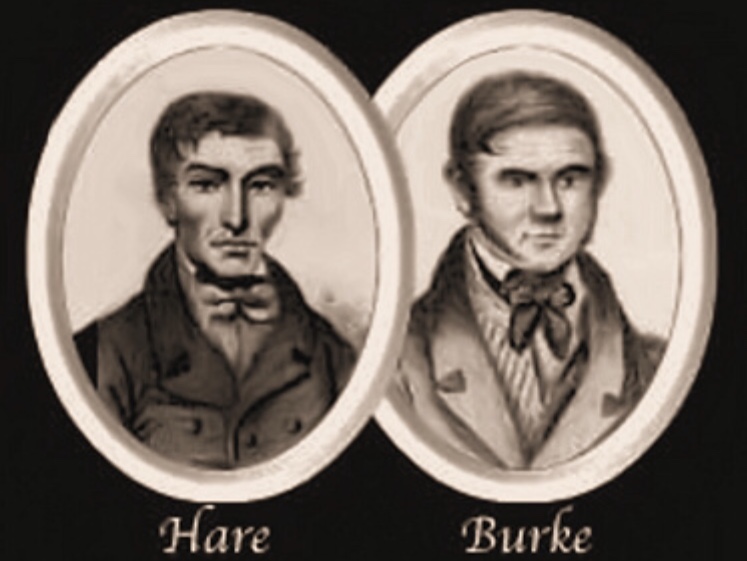 We learnt the history of what is now Waverley Station and the Princes Street gardens. Centuries ago they were a Loch called the Nor Loch. Sanitation back then left a lot to be desired and people had no choice but to use a chamber pot, the contents of which were unceremoniously thrown out on the street, and as Edinburgh is built on a hill at the bottom of which lay the Nor Loch, the waste used to flow down the hill and settle in the Loch. In short, Edinburgh is wonderfully sweet smelling now, but back then … not so much.

The Scots were very superstitious (hence all the faeries!) and very fearful of witchcraft, so much so that they suspected anyone even vaguely out of the ordinary of being a witch. So, if you had red hair, if you’d reached a grand old age, if you had a birthmark – watch out! Even King James VI (I of England) was fearful of witchcraft. Melanie told us how he went ‘Princess shopping’ in Denmark, and after having acquired one, it took him several attempts to leave because there were such strong storms that his boat couldn’t sail. This he decided, was the result of witchcraft (clearly nothing to do with the notoriously rough North Sea!) 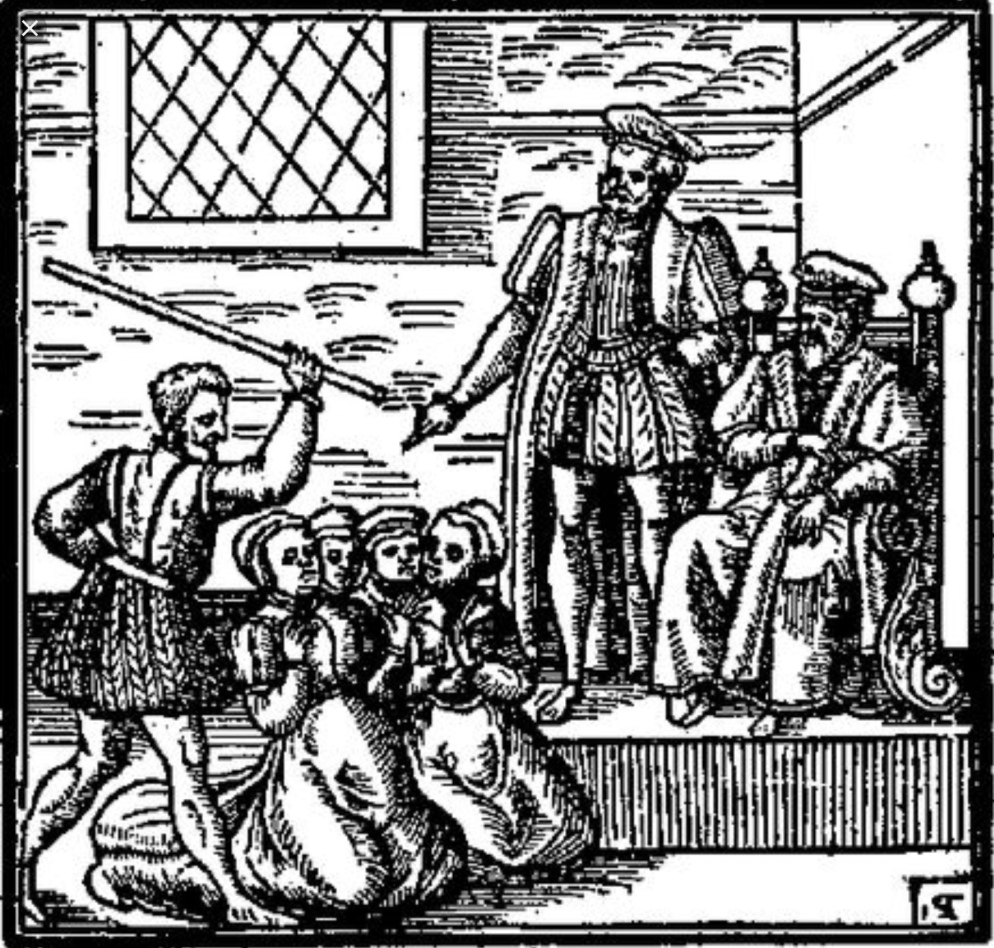 One of their favourite ways of testing whether or not you were indeed a witch, was to tie your fingers to your toes and then throw you in the Nor Loch. If you floated, clearly you had magical powers and you’d be hauled out and put on trial and if found guilty, strangled at the stake. However if you sunk, then you were vindicated …. but unfortunately you were also dead! It’s said that fifteen hundred women were found guilty of witchcraft and put to death. Now as mentioned, the Nor Loch was full of all sorts of stinky waste so if you did sink and weren’t easily retrievable, they would most likely leave you there (God rest your soul as a non-witch). Decades later when they came to drain the Nor Loch so they could develop the land, they found several skeletons at the bottom! Creepy!

At the end of the tour I scuttled off back to my hotel tout suite lest I be suffocated for medical science or hung as a witch (I have a small skin tag on my neck which I’m sure would be deemed as sufficient evidence!)

I have rambled on quite some, and I’ve only covered my first evening in Edinburgh so far, so I think I should heed my own advice and split this up into two parts to save bombarding you all in one go. I’ll be back soon with the next installment. 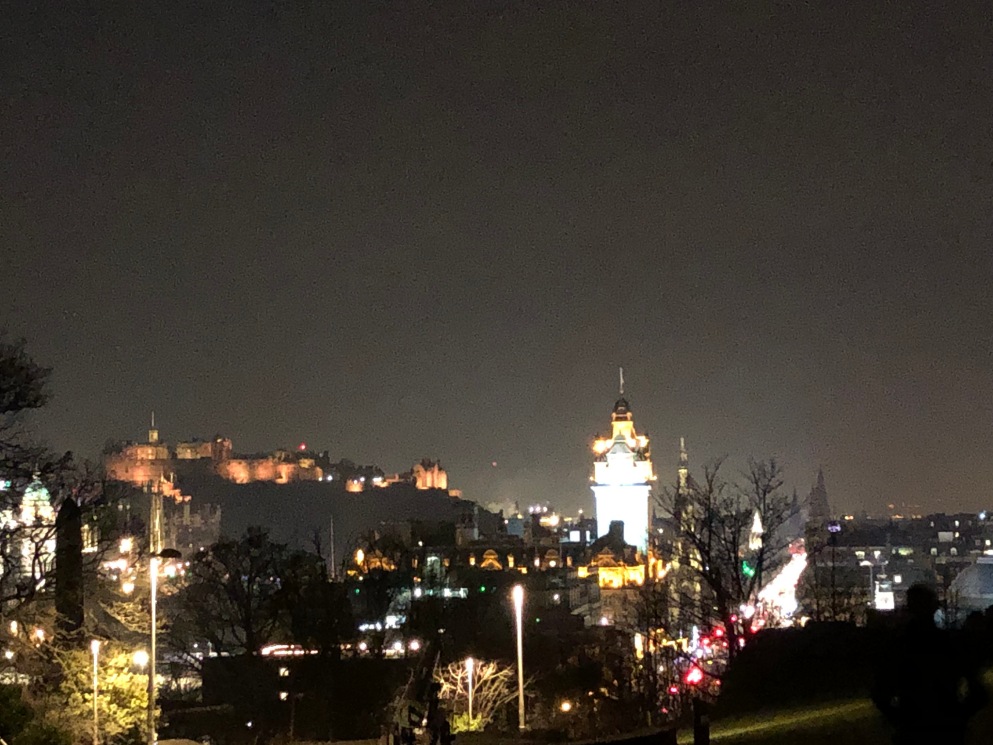 2 thoughts on “Enchanting Edinburgh – part one”