I feel like I’ve been neglecting my bloggy baby lately! Have you missed my updates or is everyone too busy trying to get ready for Christmas to notice? I promise I’m not losing my blojo (have I just coined a word? Blogging and mojo – yeah, doesn’t really work if you have to explain it!) I’ve just been struggling to fit everything in to twenty four hours each day, and that coupled with trying to reset my body clock to UK time and attempting to catch up on sleep after my globetrotting lately has meant no time for writing.

It’s not just my blog that’s had to be temporarily pushed aside, I only managed to get to the gym once in November and I’ve only been once so far in December. I’ve either not been here to go, or if I have I’ve been so tired I just couldn’t contemplate jumping around like a lunatic for an hour in lycra! I’m too scared to stand on the scales, and, let’s face it, December is hardly the most conducive time for healthy eating, is it, so I guess we know what the theme of my New Year’s resolutions will be!

We have a table at work. It’s called the cake table. A table specially for cakes! It’s possible that it wasn’t put there with the intention of housing the office sugary delectations, but it very rapidly became known as the cake table when we took possession of it, and now no one would dream of calling it anything else! Seriously, it must be reinforced by the steel that we sell because for the past week it’s been groaning under the weight of Celebrations, Foxes biscuits, Turkish Delight and many other treats that are making my chubby bits chubbier!

My lovely friend and colleague Maria also has a steady supply of dib dabs, black jacks, fruit salads (does the healthy name excuse it? No? Bother!) and lollies in her Santa bowl on her festive desk (hope she doesn’t mind me pinching this pic from Facebook).

She also surprised some of us this week with these lovely homemade gifts. 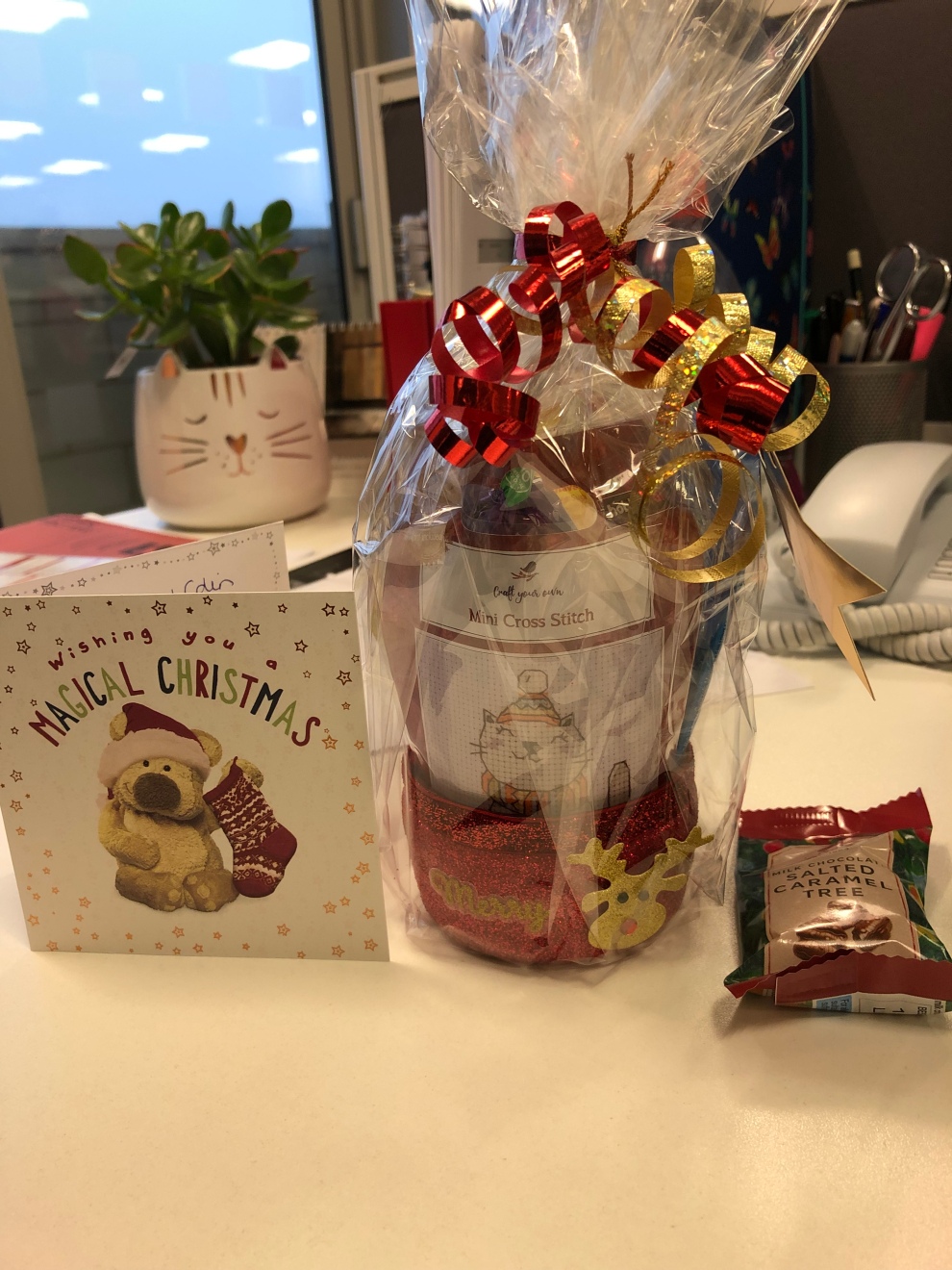 We wondered what she was going to do with the Gü ramekins that she’d been saving! Now we know!

We left work one day this week to find several men on ladders in the foyer decorating a massive Christmas Tree!

How exciting! We’ve been in this office for six years and we’ve never had a tree before!

Its my gym Christmas party tonight (yes, I am still invited even after my lack of attendance lately!) and what with that and the festive atmosphere at work, I decided that today was a good day to climb up the loft and get Christmas down. Several pffftts later as I got rained on by dust and miscellaneous loft expulsions I had all the various Christmas paraphernalia down much to the surprise of Olive and Tinkerbell.

I decided to get in the festive spirit while I was decorating. It was before 10am so a little early for a Christmas Snowball (although I may have thrown caution to the wind had I had any Advocaat in the house, or lemonade for that matter), so I went with Christmas tunes on YouTube and a hat! 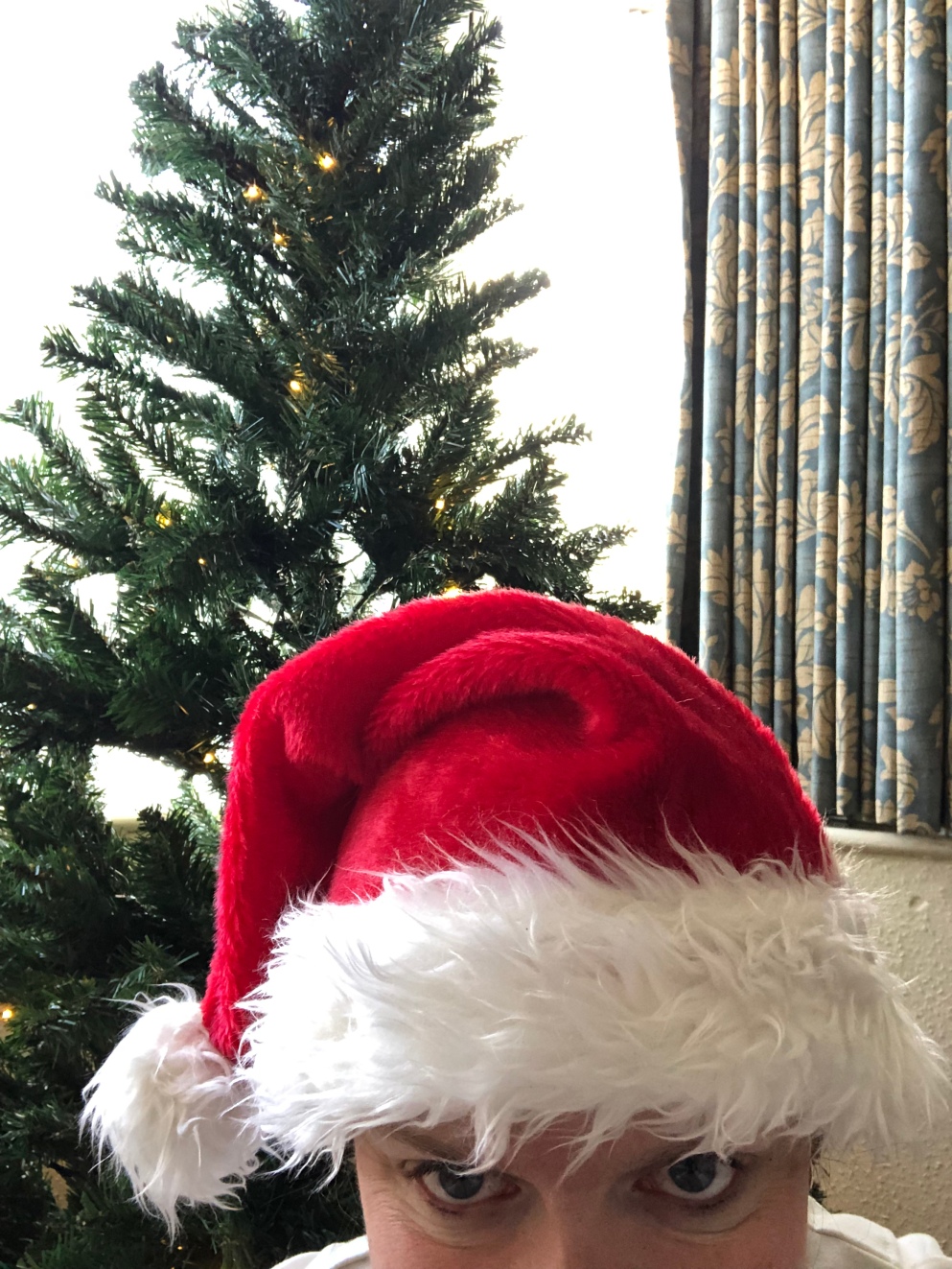 Does anyone else have their mother’s voice in their head while decorating the tree saying, ‘don’t forget the back!’ No? Just me then. I used to wonder why she was worried about the back of the tree, but I get it now. I get it especially this year as I have finally achieved an adulting aim of having my tree in a bay window! Isn’t that a proper grown up thing? Firstly owning a home with a bay window, and secondly having the tree in it so it’s visible from outside!

I have a particular order for dressing the tree. Our tree has integral lights so I don’t have to worry about hiding the wires, but I always wrap the tinsel round first and then step back to satisfy my OCDness that it looks even. Then I start with all my favourite baubles, all the ones that I’ve picked up from Harrods and various Christmas fayres over the years. 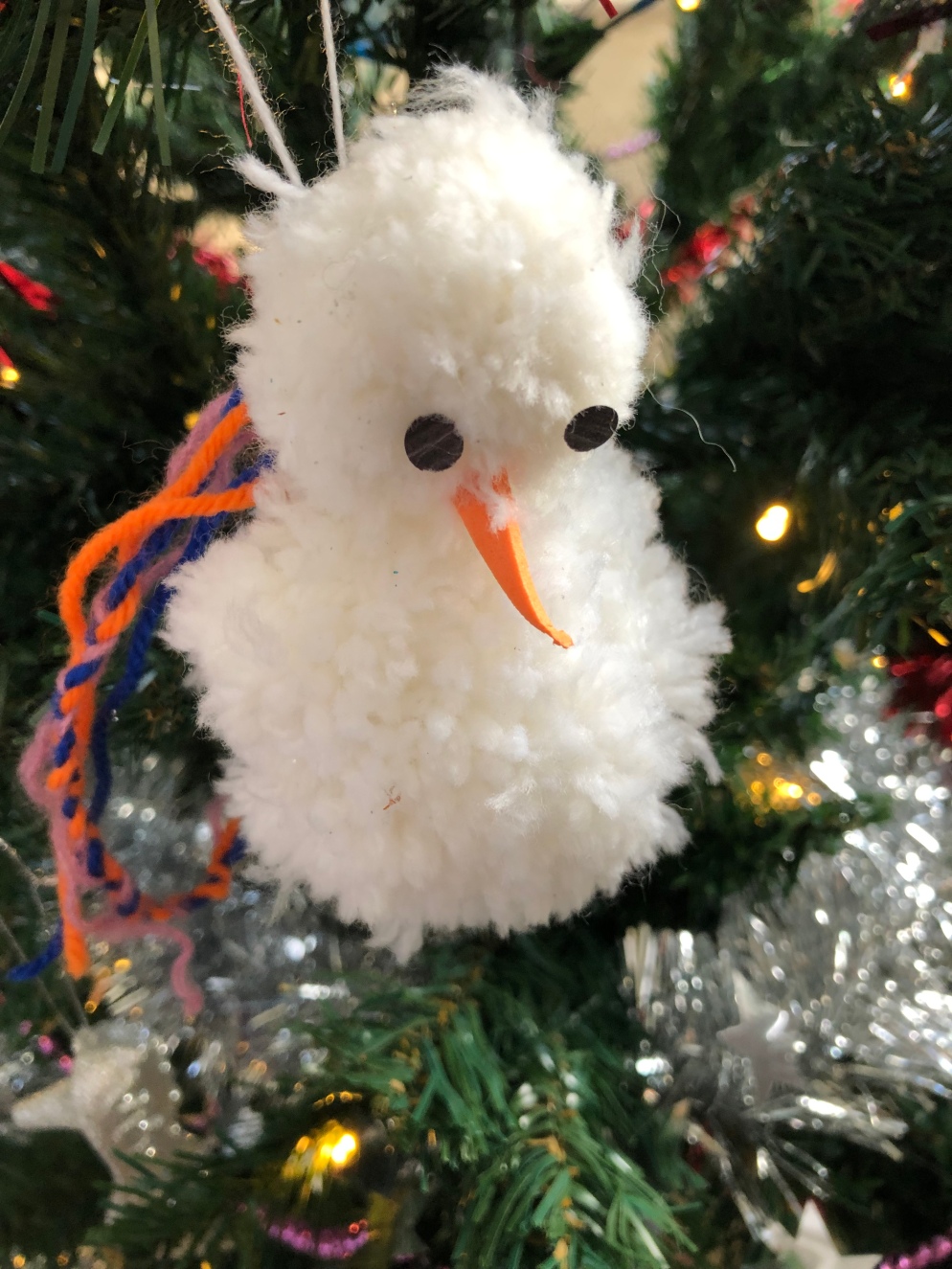 This one was made for us years ago by our nephew. He’s nearly eighteen now so he probably won’t appreciate me including this! 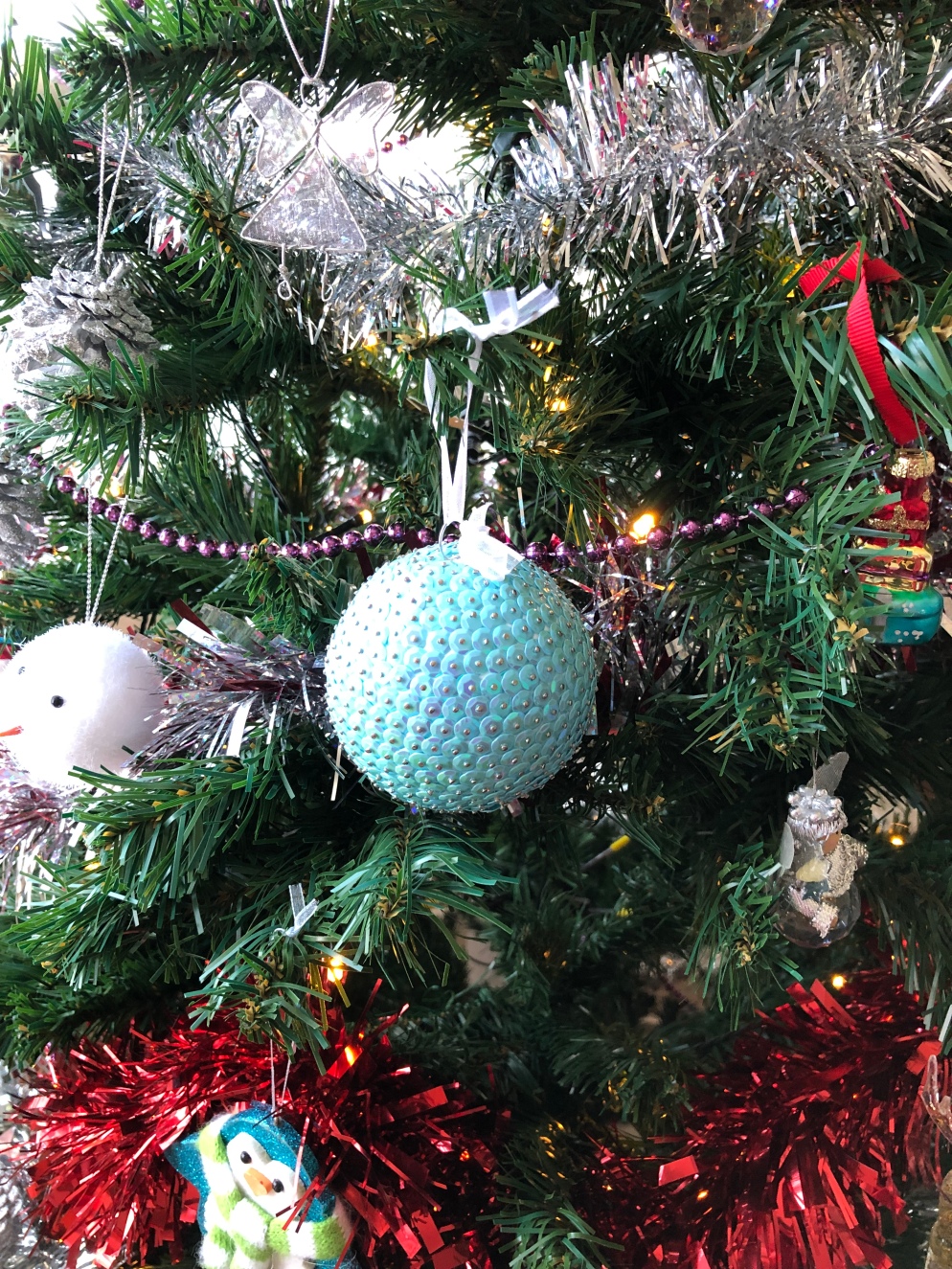 The eagle-eyed amongst you may have noticed this one in the full length pic above. I posted about this a few weeks ago when I made it from a kit given to me for my birthday. It looks lovely on the tree. Hopefully I’ll get time to complete the rest of the kit before Christmas (that may be wishful thinking given the amount of Christmas crocheting I have to do!)

I fill in all the gaps with our regular round baubles. Finally, the star has to go on top. Done!

Then I have to start upon the rest. We have a few homemade bits from my Mum. The tree skirt is her handiwork. 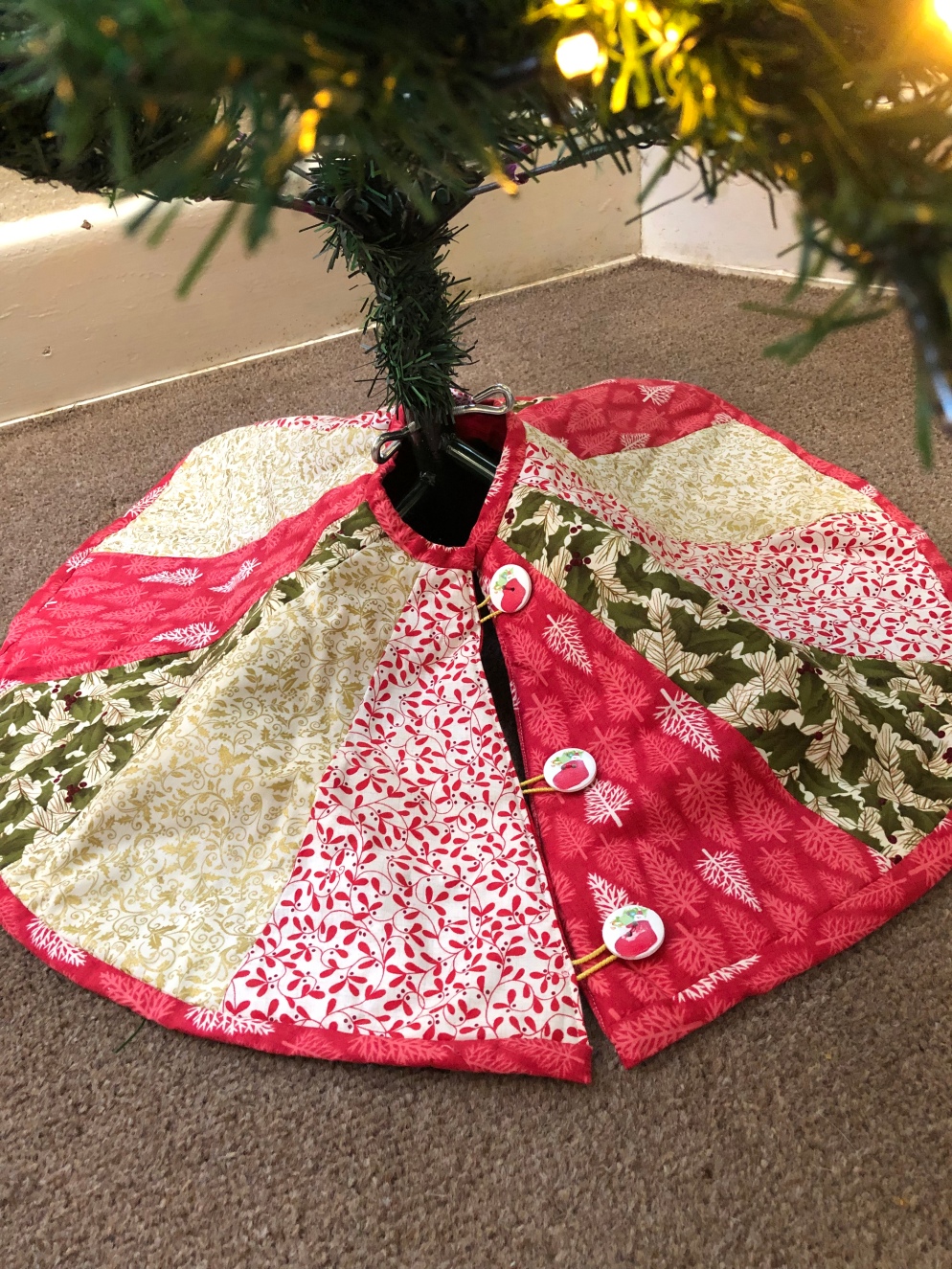 As are these two.

I make an effort with our fireplace. 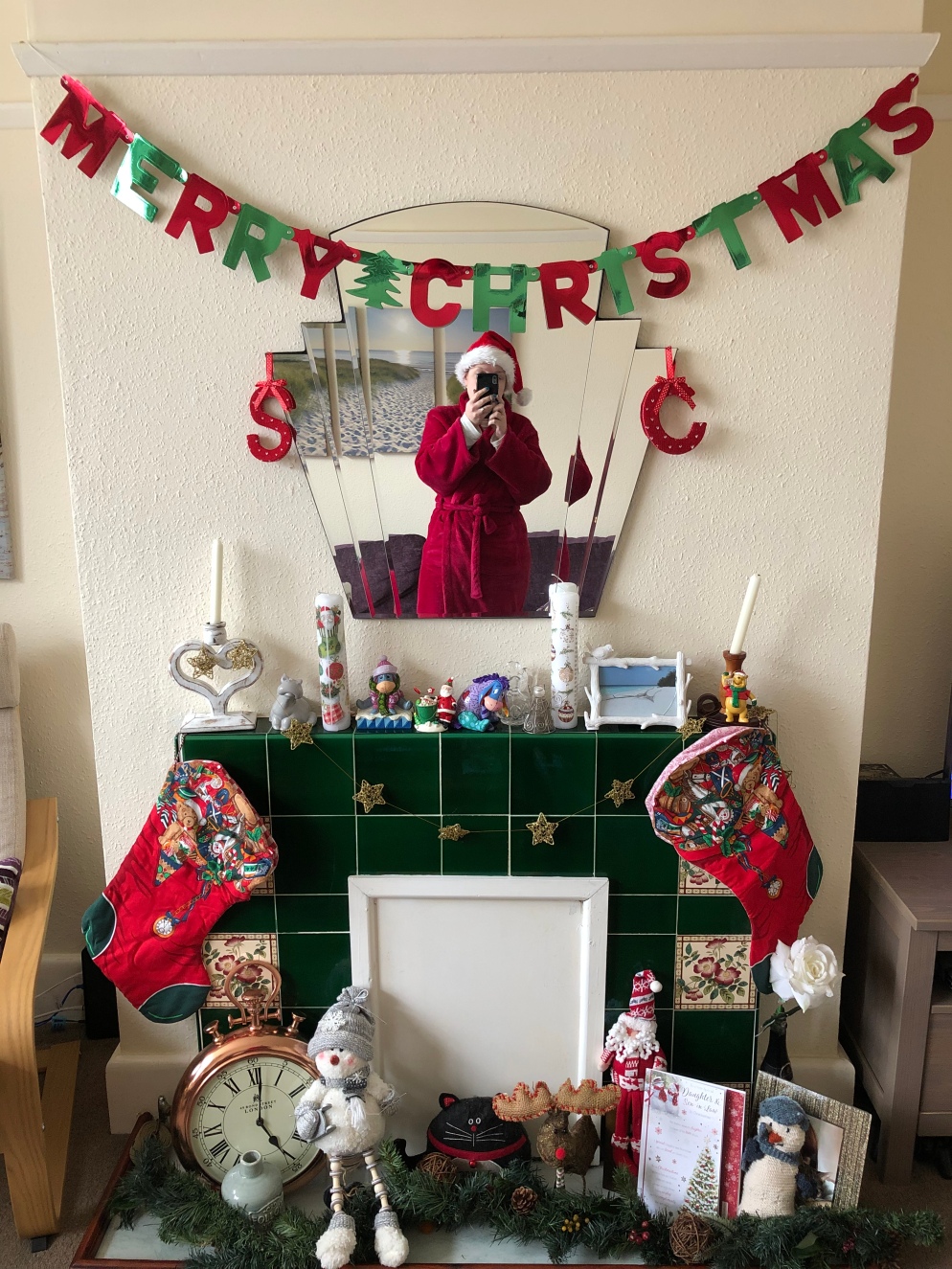 The stockings were made by my Mum too.

I dot festivity around the rest of the living room.

Even the coati’s got in the Christmas spirit!

We had our kitchen and dining room knocked through this year to make a big kitchen-diner so I’ve extended the festivity to there too.

This tree is new for my Little Box of Crochet advent calendar makes which I’ll show you when I’ve made all twenty four.

Right, I’ve got to dash – need to brave the shops to pick up my Secret Santa gift for tonight. Very disorganised, I realise, but I do at least know what I’m getting, just haven’t had time to get to the shops!

2 thoughts on “It’s beginning to feel a lot like Christmas!”