… except I do know when I’ll be back!

We waved goodbye to this gorgeous duo before 6.30 this morning and headed to the airport. As I write this we are at 38000 feet heading south west and we’re off the coast of Canada, near somewhere called Goose Bay (when I say near, obviously I mean 38000 feet above it). We’ve travelled 2200 miles and we have 2833 miles to go. It’s -50 outside. Toasty in here though.

Obviously I’m not going to be able to post this until I get to somewhere with WiFi, but I thought I’d help pass the time by documenting the day so far. We’re on a Boeing 787, otherwise known as a Dreamliner. This is Boeing’s newest addition to their range, and, if I’m not wrong, was recently the first plane to fly non-stop to Australia from the UK.

You can tell it’s new. It’s fancy pants! The windows have a button that adjusts the tint in the glass so it’s either completely transparent, completely opaque, or anywhere in between. None of the old window shutters that you normally get on a plane.

When we got on, the windows were all normal transparent glass but after we took off the crew activated the ambient lighting which is supposed to replicate the conditions in the time zone that you’re flying to, which allegedly reduces jet lag, so now the windows are semi-opaque. I never really get jet lag when flying west, so we’ll see what effect it has on the return journey (not that I’m thinking about that yet!)

When they activated the ambient lighting, all the lights down the ceiling of the plane changed colour. I was too busy marvelling at it and forgot to take a photo, but hopefully they’ll do it again so I can show you (update – they didn’t!)

Seatback screens are nothing new for anyone who’s flown long haul on a decent airline, but I don’t recall them having USB slots before. Fab! No need to worry about how much candy crush I play then, I can just charge my phone if need be.

So far we’ve done quite a bit of eating (which is fine because calories don’t count up here, right?) We had breakfast in Wetherspoons at Birmingham airport (once we’d found a seat that is! Very busy airport this morning).

Apparently it was lunchtime a while ago (I have no idea, what with being up at the crack of dawn and all this ambient lighting business) so we were served a meal. I know lots of people don’t like aeroplane food, but I really like it.

We had chicken in tarragon sauce with roast potatoes, broccoli and carrots with a bread roll. Then we had cheese and crackers and a chocolate orange ganache dessert. Yum!

Apparently we’ve been flying for four hours and thirty four minutes, and in that time I’ve been luxuriously unproductive! Lots of procrastination, faffing and generally doing entirely what I want while not having to organise, remember or be reliable. That, while I’m here, is someone else’s job, and they are welcome to it!

I have started to crochet a gift for my new baby niece who is currently incubating in utero.

I have candy crushed all my lives several times (including changing the time to trick it into giving me more!) Level 2518 completed! (Update: levels 2519, 2520 and 2521 also completed). I’ve played a million games of traffic rush. I’m sure my high score used to be 287, but it appears to have forgotten that, so I was determined to beat 200 before I stopped.

What else to do now? I have Red magazine from ages ago that I hadn’t got round to reading. It has Keeley Hawes on the front and I’m interested to see what she has to say about the Bodyguard (update: nothing about the Bodyguard but she seems lovely).

I have Eleanor Oliphant is Completely Fine to read, which my best friend bought me for my birthday. I’m looking forward to this – I never read actual books anymore, unless they’re non-fiction with pictures that don’t translate well to my kindle, and this is an actual book, with pages and everything. I find the kindle easier normally because I do most of my reading before I go to sleep when I like to turn the light off to ease my eyes, so a book’s no good and also, there’s a very real risk of dropping an actual book on your face when reading lying down, and that hurts and you feel a bit silly if your husband sees! I’m going to have plenty of time and opportunity for actual book reading over the next week though. What bliss!

There’s always more eating to be done too. Apparently we get afternoon tea later! (Update: we did!) 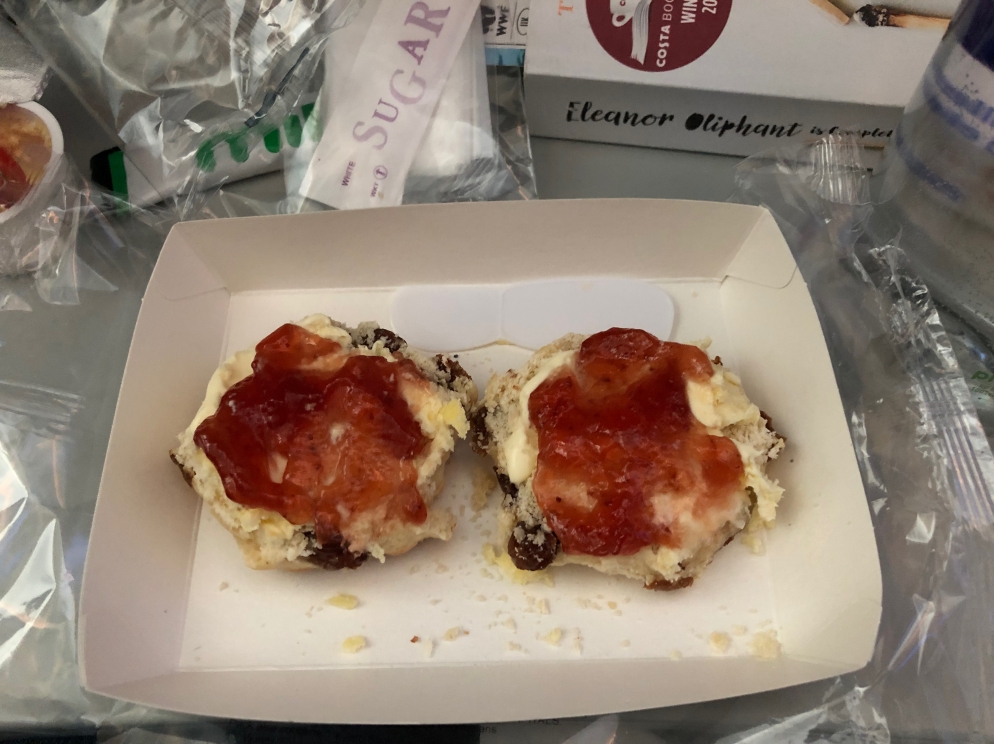 Think I’ll get on with some more completely unproductive things now.

We flew out over Ireland, under Iceland and down the east coast of the states. This, believe it or not, is Cape Canaveral. You can see the Assembly Building (largest single storey building in the world) if you look close enough. 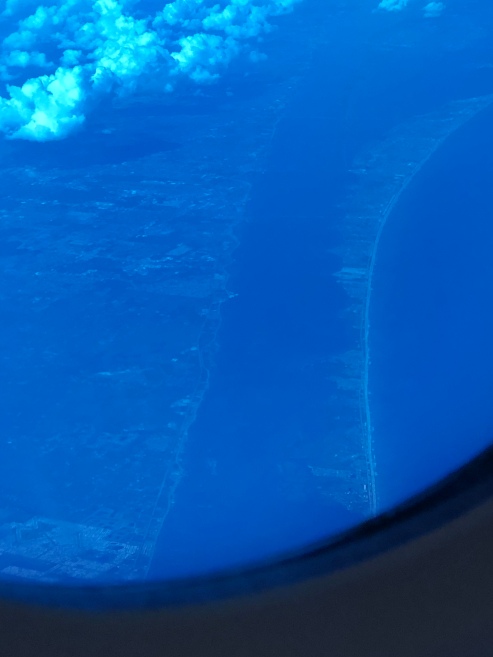 It’s funny how you look on the map and think, how have we got another four hours to go, it’s only a couple of inches on the map. Then you realise those couple of inches actually constitute the entire east coast of America! America is BIG!

So as you can tell by the fact that this is published, we have now arrived. Completely exhausted but happy.

Our bags got randomly searched at the airport. The guy seemed to find my wool strangely amusing and was utterly bemused by the copious amounts of Fisherman’s Friends that hubby has (he uses them as an anti-smoking aid).

Haven’t seen much of the hotel yet but our room is lovely (and huge!) 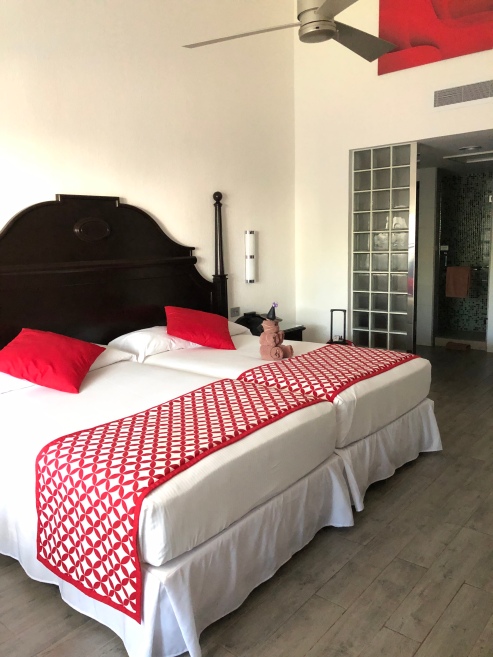 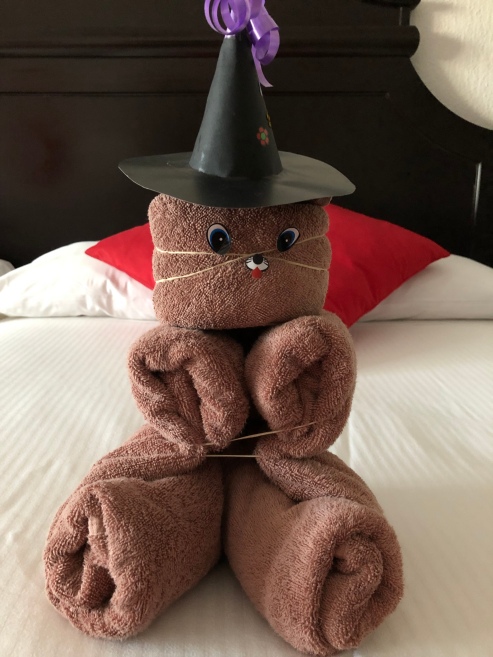 And it has optics!! 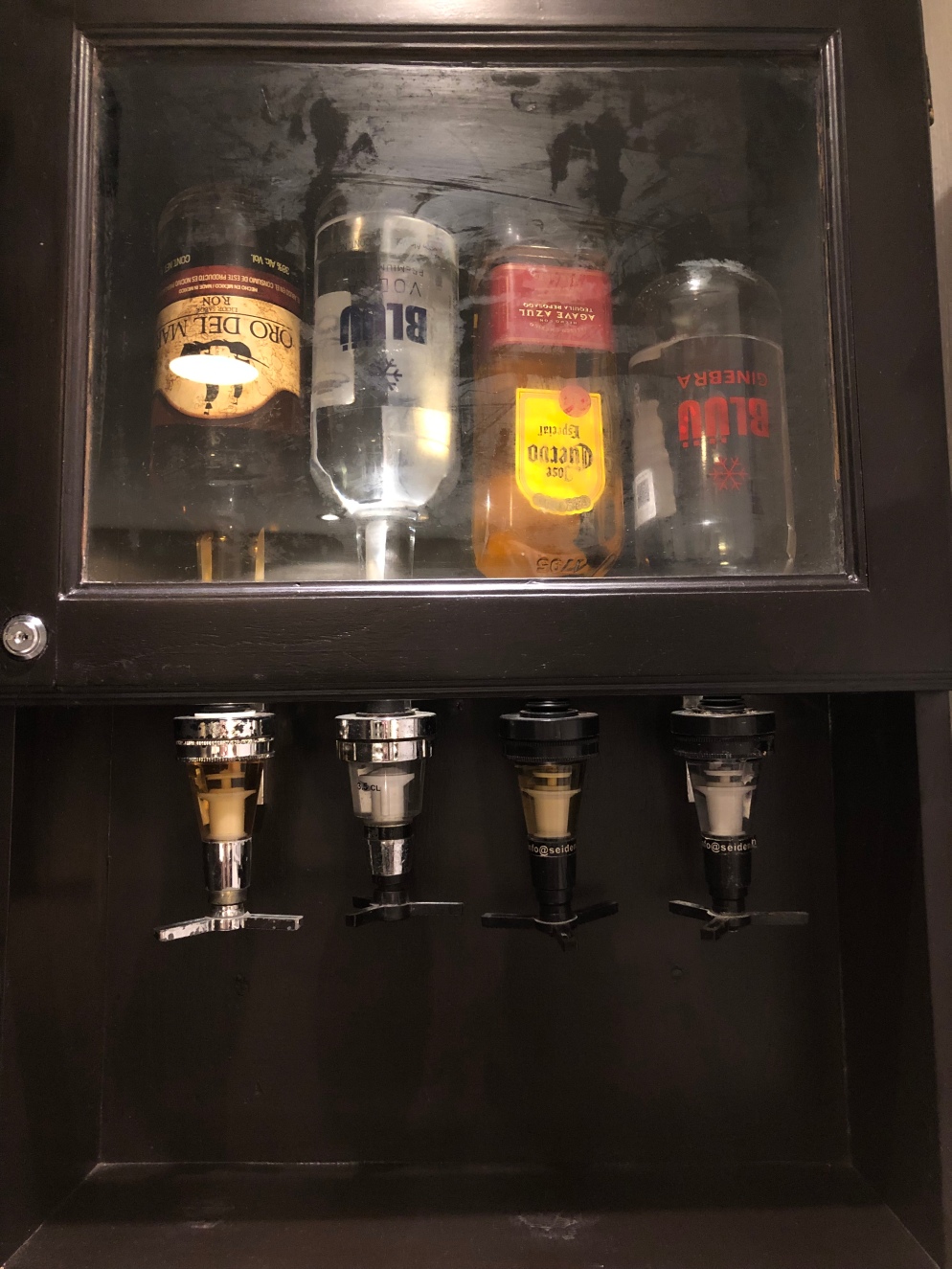 This could be dangerous!

And this is the view from the balcony.

We’ve already seen a capybara in the grounds. No photo unfortunately but I have a week to remedy that. We can hear parrots outside and there are, allegedly, coatis roaming around.

Not sure if we’ll do much exploring tonight. It’s not 6pm yet here, but our bodies think it’s 11pm and we were up at 5.30am so I think bed may win over exploring.

3 thoughts on “Leaving on a jet plane”